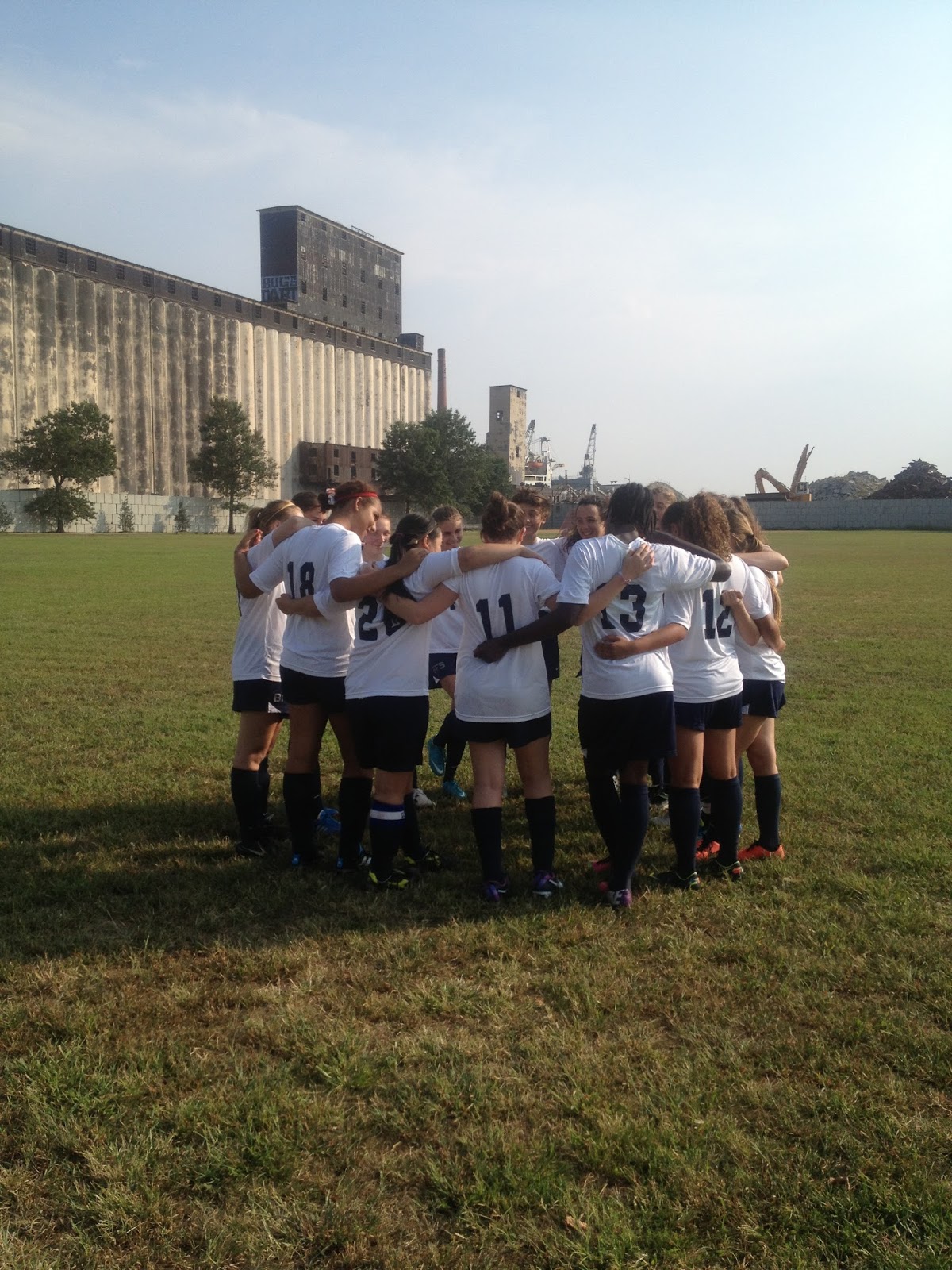 The Panthers began the defense of their ISAL championship
title with a 3-0 victory over the French American School. Halima scored a
hat-trick of goals to record the first win of the season.
The game was much closer than the 3-0 scoreline would suggest. French American hit the crossbar twice before #13 Halima scored a breakaway goal to put BFS 1-0 up from #4 Elinor’s rebounded through ball.
Recognizing French American had been the better team in the 1st
half, BFS made a tactical change from 4-2-3-1 to play 3-5-2. Within 10
mins of the 2nd half, BFS extended their lead to 2-0 when #13 Halima received a pass from #7 Aoife in the 18 yard box and finished from the rebound after her first effort was saved. #13 Halima scored her hat-trick on the hour and #15 Greta provided her first assist of her HS career.

BFS Coach Gary Lawson:
“We certainly rode our luck in the 1st half. French American
could have been 2-0 up if it wasn’t for the crossbar and post. Our
defense played well and managed to block at least 5 shots too.The 2nd
half was much better in terms of retaining possession and making more
intelligent decisions. French American are a good team and we were
somewhat fortunate to not concede, but we succeeded in keeping a clean
sheet so that is a positive.
“Our young players are developing quickly and are learning they
have less time on the ball than they think. Both Manya and Niamh have
made impressive starts to the season and they are contributing much more
than we expected for 8th graders, which is great. Naya did a great job
on their dangerous #20 and stopping her from making assertive runs
through the middle, and in Halima we have one of the top strikers in the
region.” 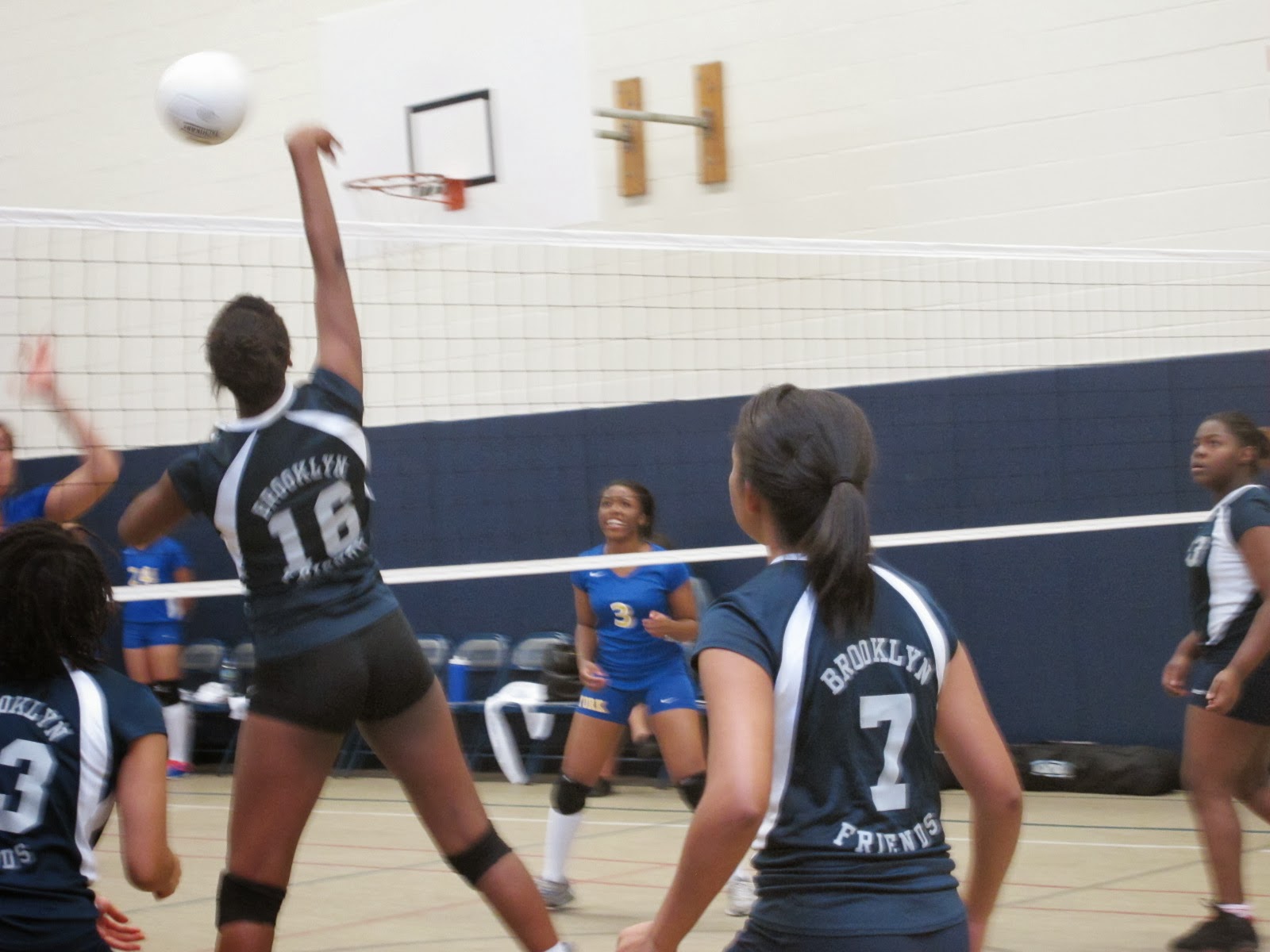 The BFS Girls Varsity Volleyball team played against Friends Seminary in the upper gym was another great learning opportunity.  Both teams were a little nervous in the first set, but after BFS established their game, they took control of the match to win in 3 straight sets (25-18,25-14,25-18).  It was a great team effort, where everyone had an opportunity to get on the court and contribute to the overall team performance.  Our team continues showing great potential.  As the season progresses, everyone should continue improving her individual skills, and the overall team game.  We are still early in the season, but players are starting to find their roles and strengths.  Our 3 seniors captains, Chloe B., Anna M., and Sarah M., are doing a great job leading the team with their enthusiasm and commitment to the game of volleyball.

On Wednesday the BFS Girls Varsity Soccer team defeated Birch Wathen Lenox down at Red Hook 7-0.  The panthers recorded their 2nd straight win of the season in a high- scoring rout of Birch Wathen Lenox.  A
2nd hattrick from #13 Halima, and a brace of goals and assists from #10
Olivia helped BFS secure 3pts in the ISAL league. More goals from #12
Naya, and #8 Niamh (her first in HS soccer) added to the scoreline.  Defensively, BFS were untroubled and stopped BWL from recording a single shot of note and back-to-back clean sheets.

“We
were 5-0 up within 20mins and really started the game with purpose. I
am pleased for Niamh who scored her first goal of the season, and her
first in HS soccer. Olivia had a stand-out game in the midfield with two
goals and two assists. It is important to be consistent with
performances and control possession against BWL. They were the finalists
last year and we needed to respect them, but we knew if we play the way
we can we could dominate that game. I am proud that we did that.” 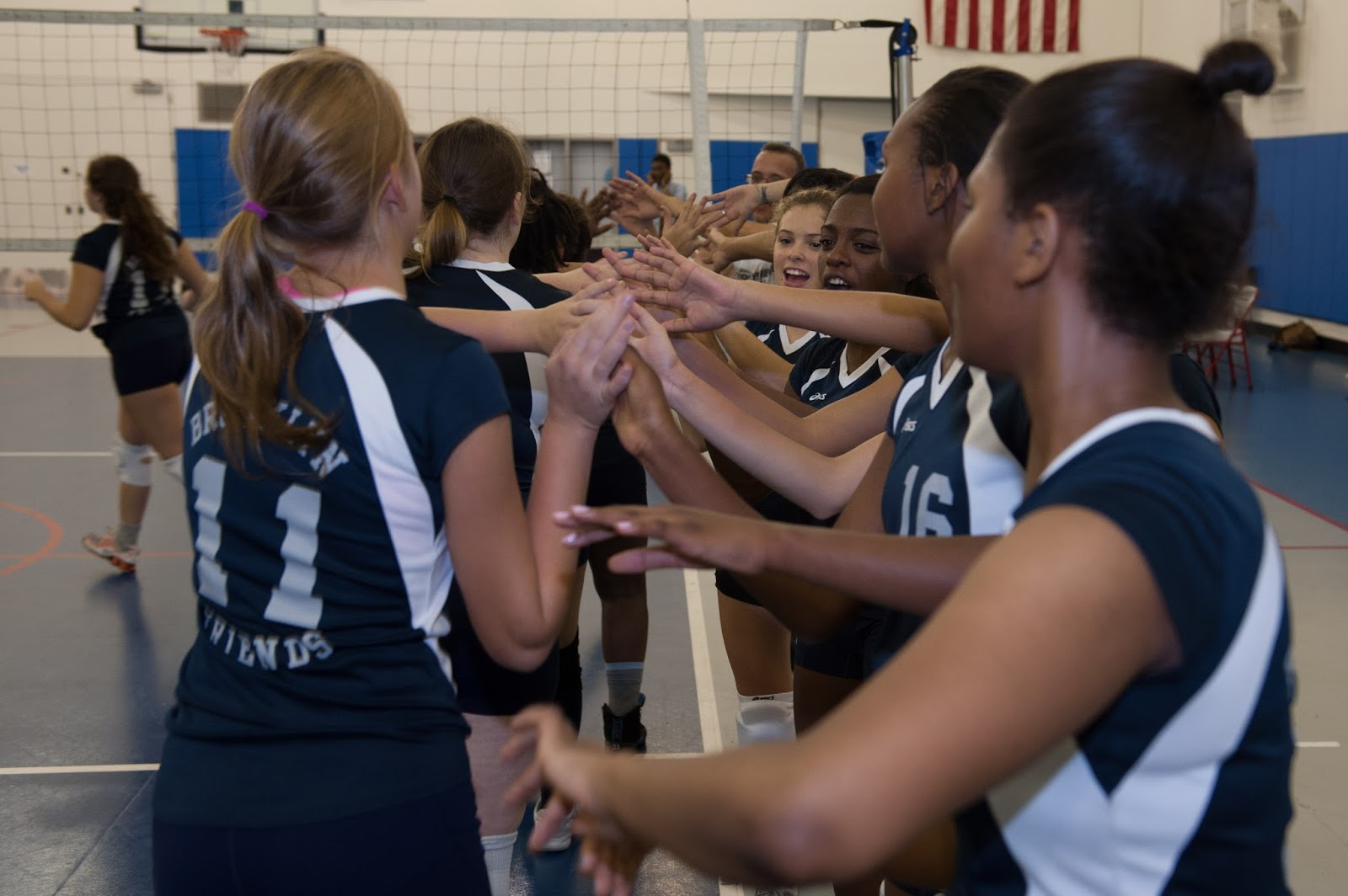 The BFS Girls Varsity Volleyball  team took on BWL in the upper gym.  The team started the game totally focused, playing very aggressive defense and consistent offense, to take a 10-0 lead behind Sarah M. serves.  The team continued their strong overall play to finish the first set 25-4.  After getting overconfident, and slowing down during the second set the team struggled to find their consistency as the second set was tied 8-8.  At that point BFS realized they needed to play better and with more focus.  They took the lead and never looked back winning the second set 25-17 and getting the victory.  Overall it was another good experience that taught the team to play focused throughout the match, regardless of how they started. 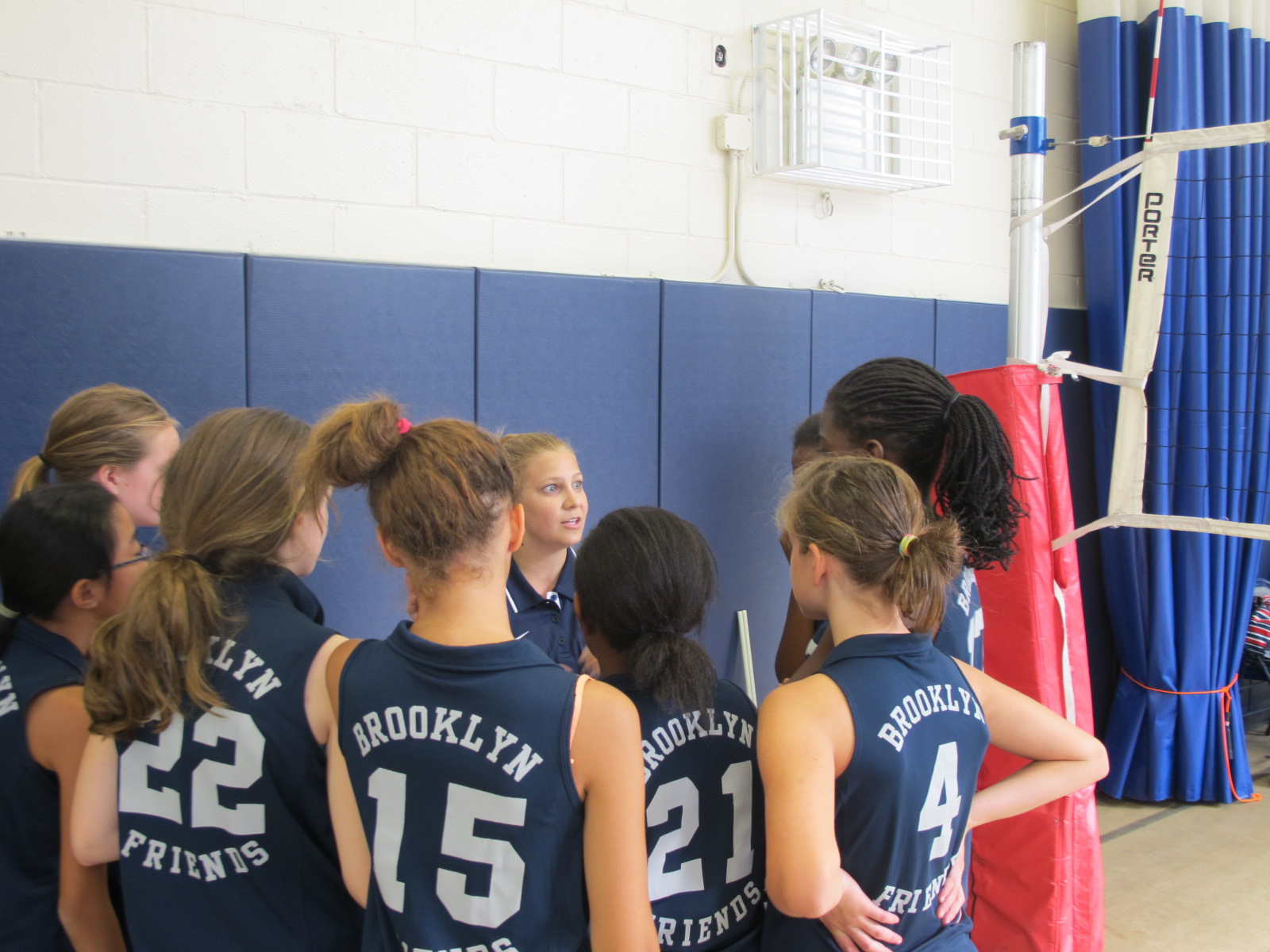 The BFS MS Girls Volleyball team is not only strong in spirit, but size as well.  The team consists of 18 girls and all of the 17 that attending the first match of the season against Birch Wathen Lenox did a tremendous job.  Lucy S., a veteran 8th grader and Maxine S., a new 7th grader did a great job as co-captains.  They both helped their team stay in formation.  Nia L. put up 5 serving points in the first match keeping BFS in the lead with a 25-20 win.  Zelda C. was the first to serve during the second match with 12 straight service points, which brought up the team spirit to a new high.  Galen J., a new 7th grader helped finish the game off with 6 serving points and BFS went on to win the second set impressively, 25-7.  The girls put all their hard work into play and communicated very well with each other.  BFS MS Girls Volleyball had a great start to the 2013 season and they are looking forward to their next match.  Blue Pride!!

On Friday the BFS Girls Varsity Soccer team tied Packer 1-1 in its first ever game at beautiful Brooklyn Bridge Park.  In the first BFS high school soccer game held at Brooklyn Bridge Park,
the Panthers tied 1-1 with regional powerhouse Packer. BFS have been
beaten heavily in recent years against our ACIS rivals, but Friday 20th was different.  Tied 0-0 at the half, the Panthers took the lead after a penalty was
awarded for a foul on #13 Halima. She stepped up and cooly stroked the
ball home for her 8th goal of the season. The lead didn’t last long, as
Packer pushed forward and scored a high-looping effort that flew over #1
Sophie. It was to be the only time the BFS goal was breached as #1
Sophie had a stand-out performance between the posts with 9 saves.

“What a fantastic occasion! The team
was truly humbled by the support we received from the sidelines. Believe
that your cheers and support created the ‘12th man’ effect! BFS have
certainly set a benchmark of performance for the rest of the season with
that result. Many eyebrows will be raised when they see that BFS tied
with Packer, and might I add, deservedly so.” 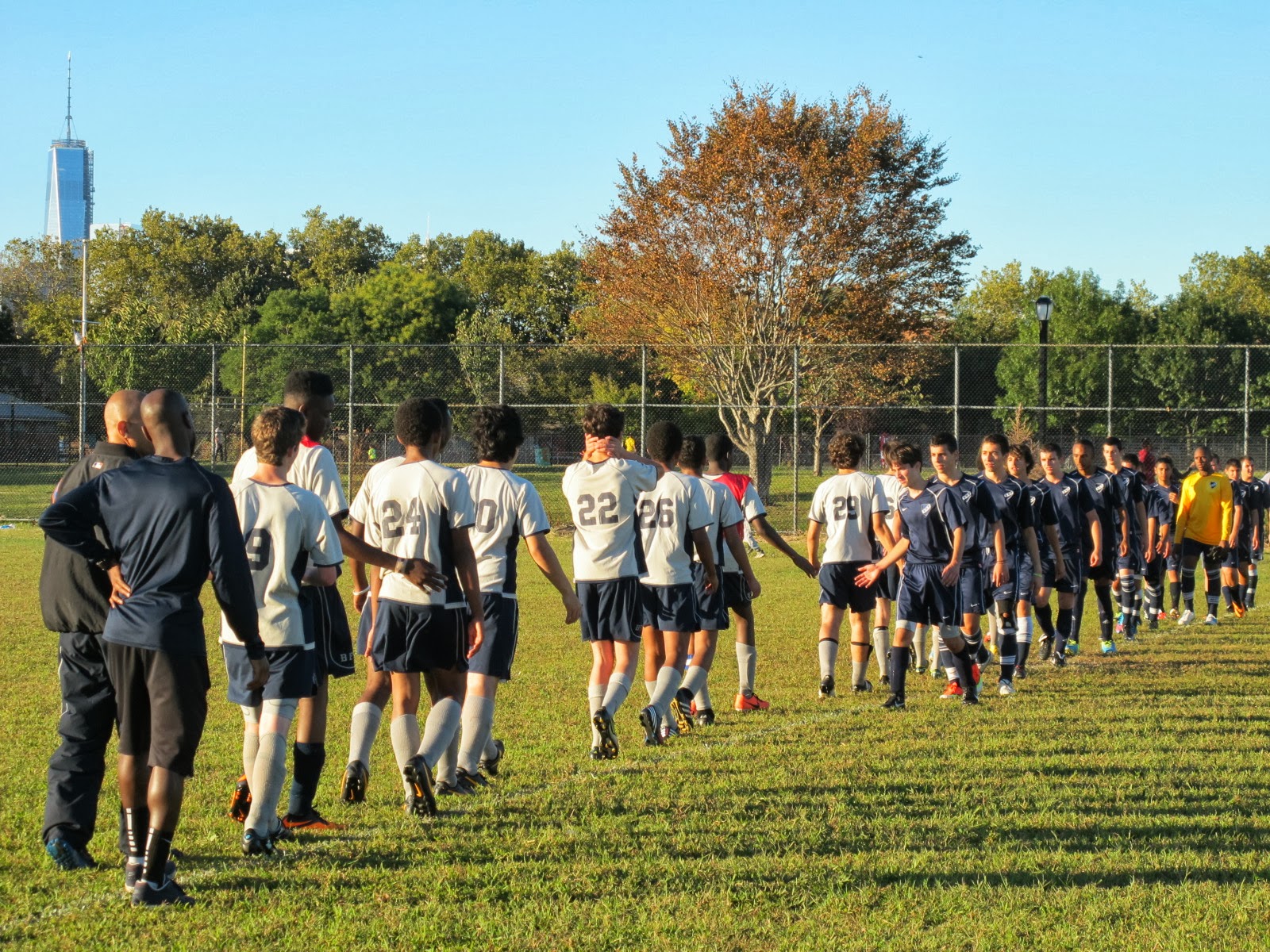 The BFS Boys Varsity Soccer team tied Garden 2-2 down at Red Hook.  Boys Varsity Soccer played a very solid game on Friday. After a strong start to the game we conceded
our first goal.  But showing great character and determination the boys
kept working together.  After a bit of a scramble inside of the garden
penalty box, the ball fell to Henry K. who took a well placed shot
that found the side netting. A few minutes later Charlie Hills picked
the ball up on the 18yd box.  After dribbling one if the Garden
school defender he was taken down by the second, which gave us a penalty
kick.  Henry stepped up to the spot to put it away and gave his panthers
a 2-1 lead.  The lead unfortunately did not last long. Right before the
whistle was blown for halftime garden tied the game.  The boys kept
focused and stayed disciplined to finish off the second half with
neither team being able to score a winner. 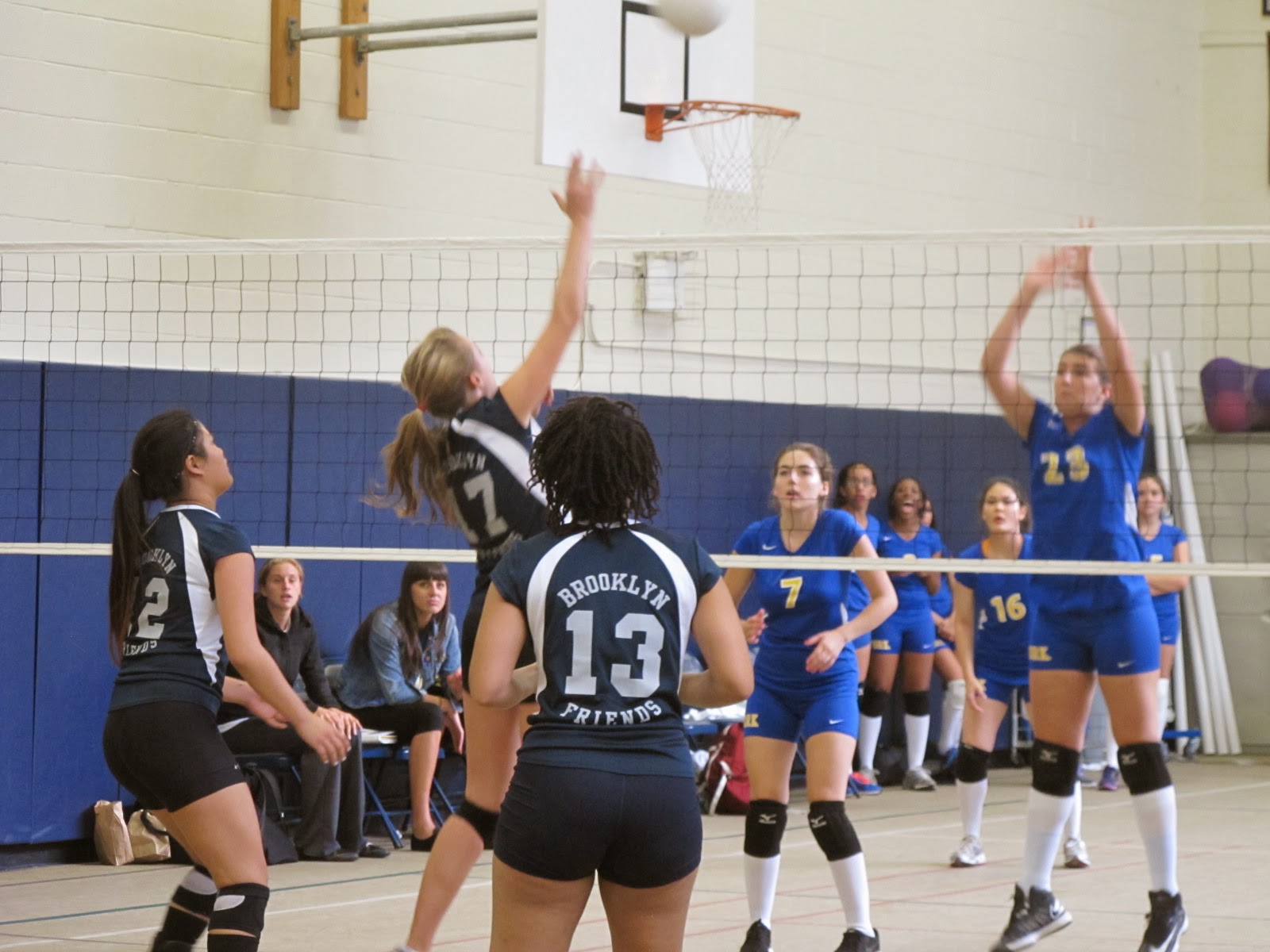 The BFS Girls Varsity Volleyball team defeated Garden 2-0 (25-21, 25-12) on the road.
We continue making progress and understanding
the various roles of each player.
Garden was another example of how much room we have to continue
improving.  After a long wait for
the bus, we arrived to the match a little lethargic.  The first set was competitive and close up to 20
points.  Then we started finding our
rhythm, and won 25-21.  During the
second set, BFS was on a good pace and played a lot more consistently on the
way to a 25-12 win.  This team
shows a good understanding of needs to be done to play competitively against
any opponent.  There’s a lot of
potential and room for growth! 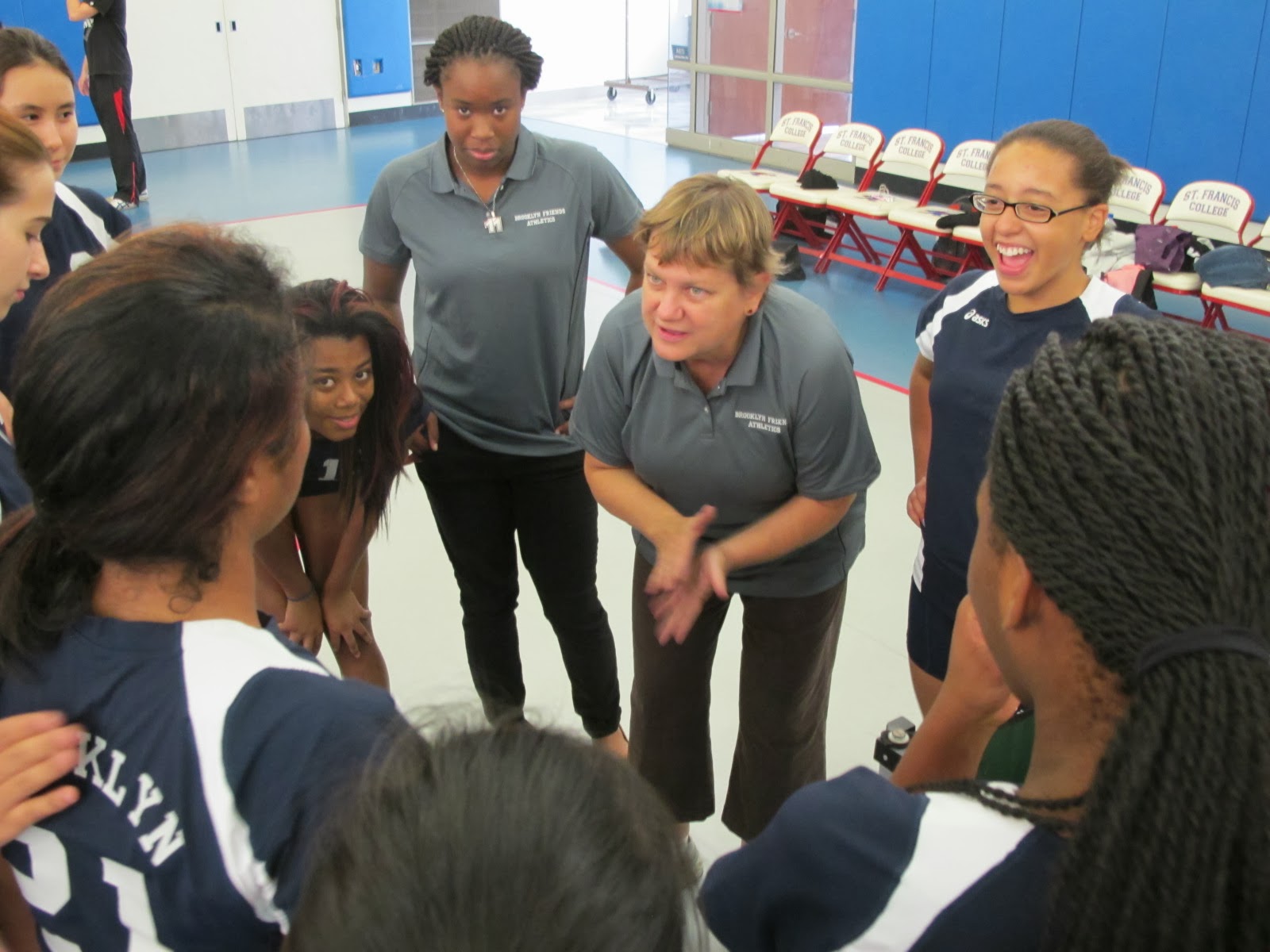