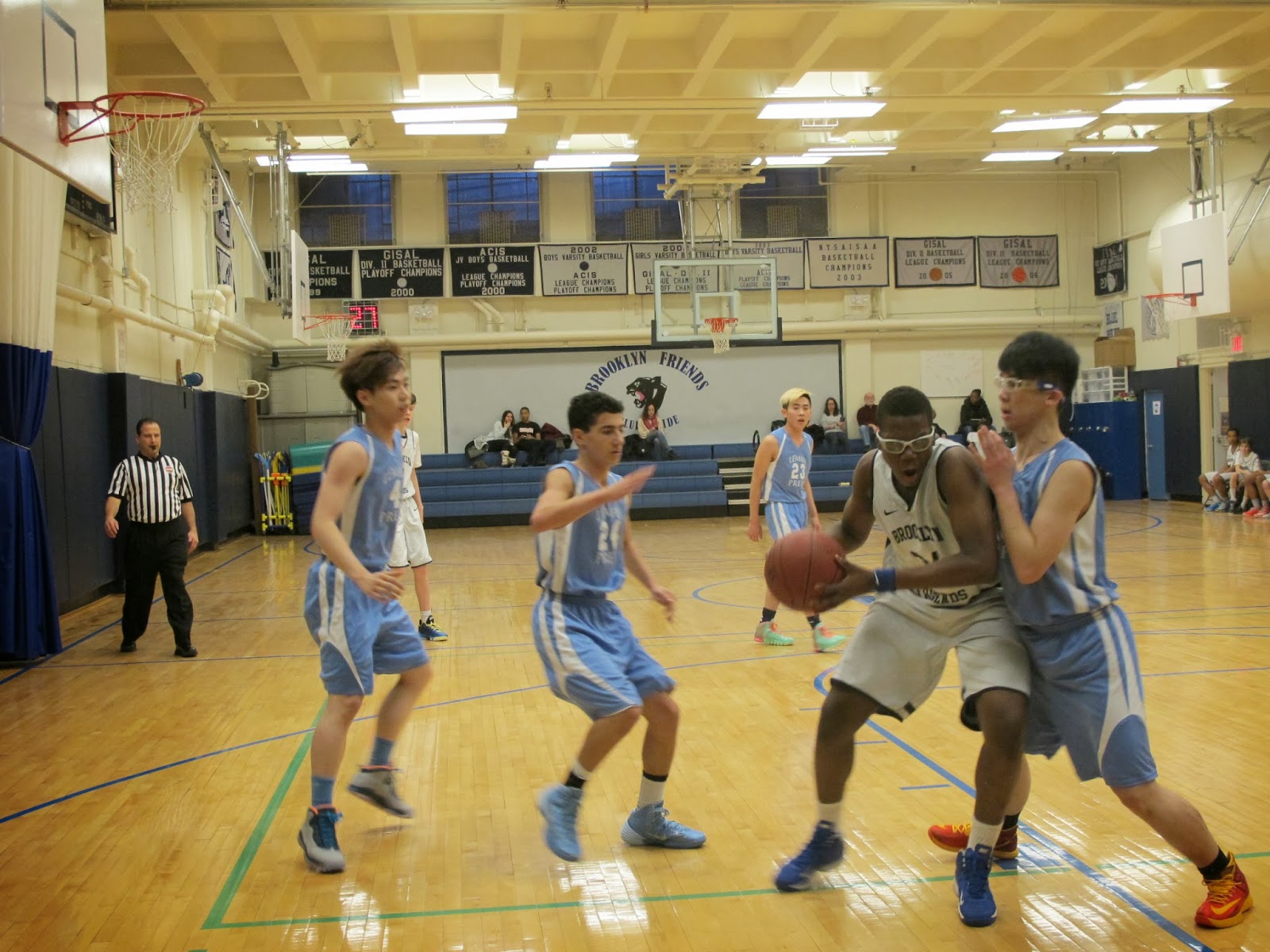 On Wednesday the BFS Boys JV Basketball team defeated Leman Prep 49-46 in exciting game in our lower gym.  The team picked up their second win of the
season in a hard fought exciting match up.  It was a close game throughout.  Freshman Charlie S. made his first appearance of the new year hitting some clutch shots and running the offense.  Sophomore Henry J. played excellent defense when asked to
guard Leman’s best player.  Henry even picked up a huge charge on
the player to foul him out of the game.  But if it weren’t for our two
freshman big men, Isaac H. and Malik D., the outcome might have
been different.  Other than grabbing 24 rebounds and having 4 blocked
shots between the two, they hit huge free throws for us down the
stretch.  Most importantly this was a team effort.  The effort and grit of the entire team
showed to pull off the team victory.  Honorable mentions: Sam H., Ben and
Sam F., Tyler Vincent.  Next up for BFS they take on their fellow Friends at Friends Seminary on Friday.  Blue Pride!! 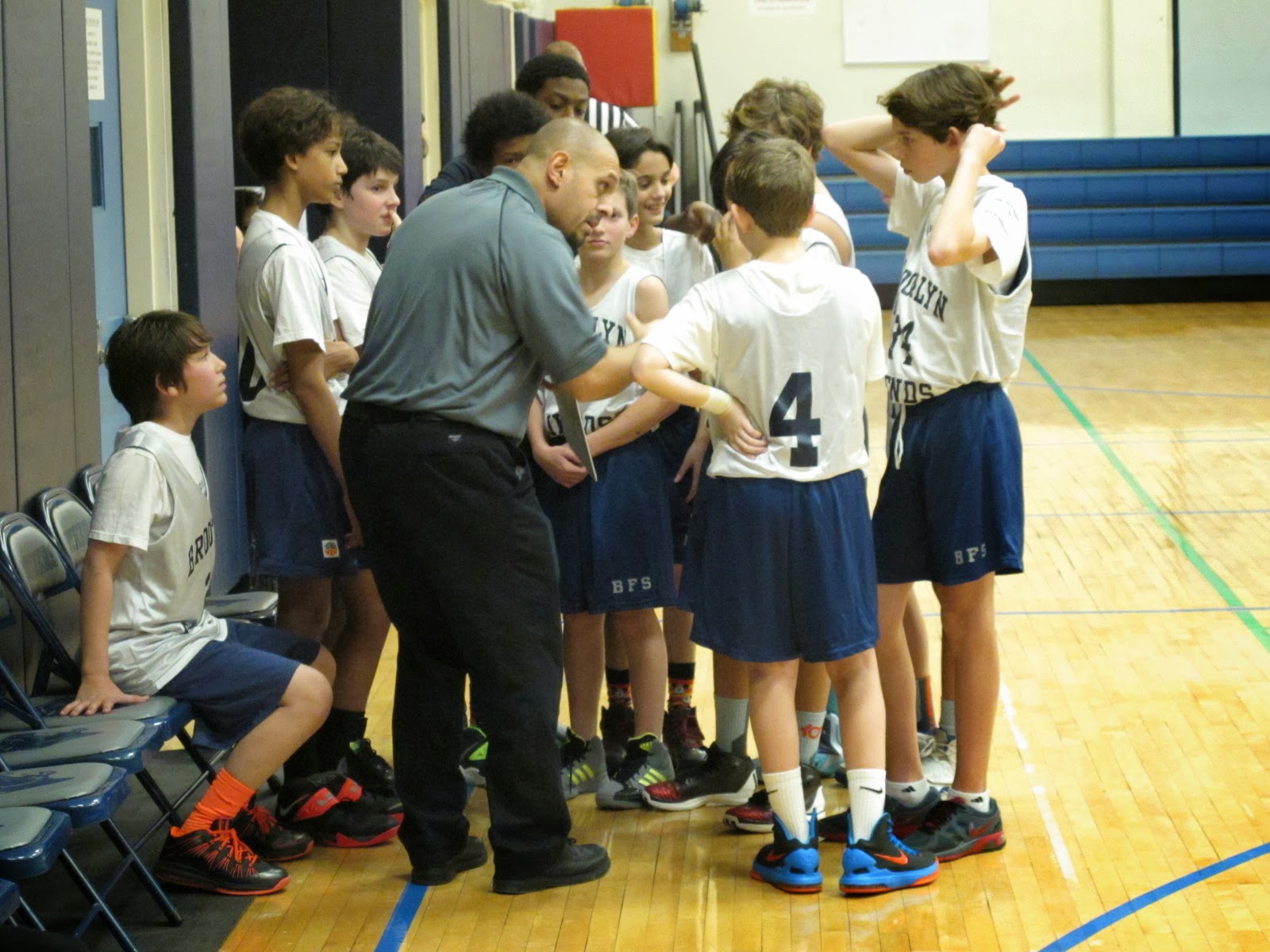 On Thursday the BFS MS Boys Basketball team defeated LREI 52-47 in the lower gym.  After a recent tough league loss, the MS team bounced back to get back in the win
column.  With the victory the boys team remain undefeated at home this season,
a perfect 5-0.  The team was led once again by
seventh grader Miles B. who dropped in 19 pts., including 5 for 5 on free throws.  It was
however anything but a one man show as nine different players scored in
the balanced effort.  Chris K. scored 9 pts., Kwesi S. had 6 pts., 4pts for Matthew
R., Peter H., Cailean M., Daniel D. and Miles J-P each scored 3pts and Luca J. chipped in with 2 points.

Next up for the team is a meeting with Churchill next Wednesday. 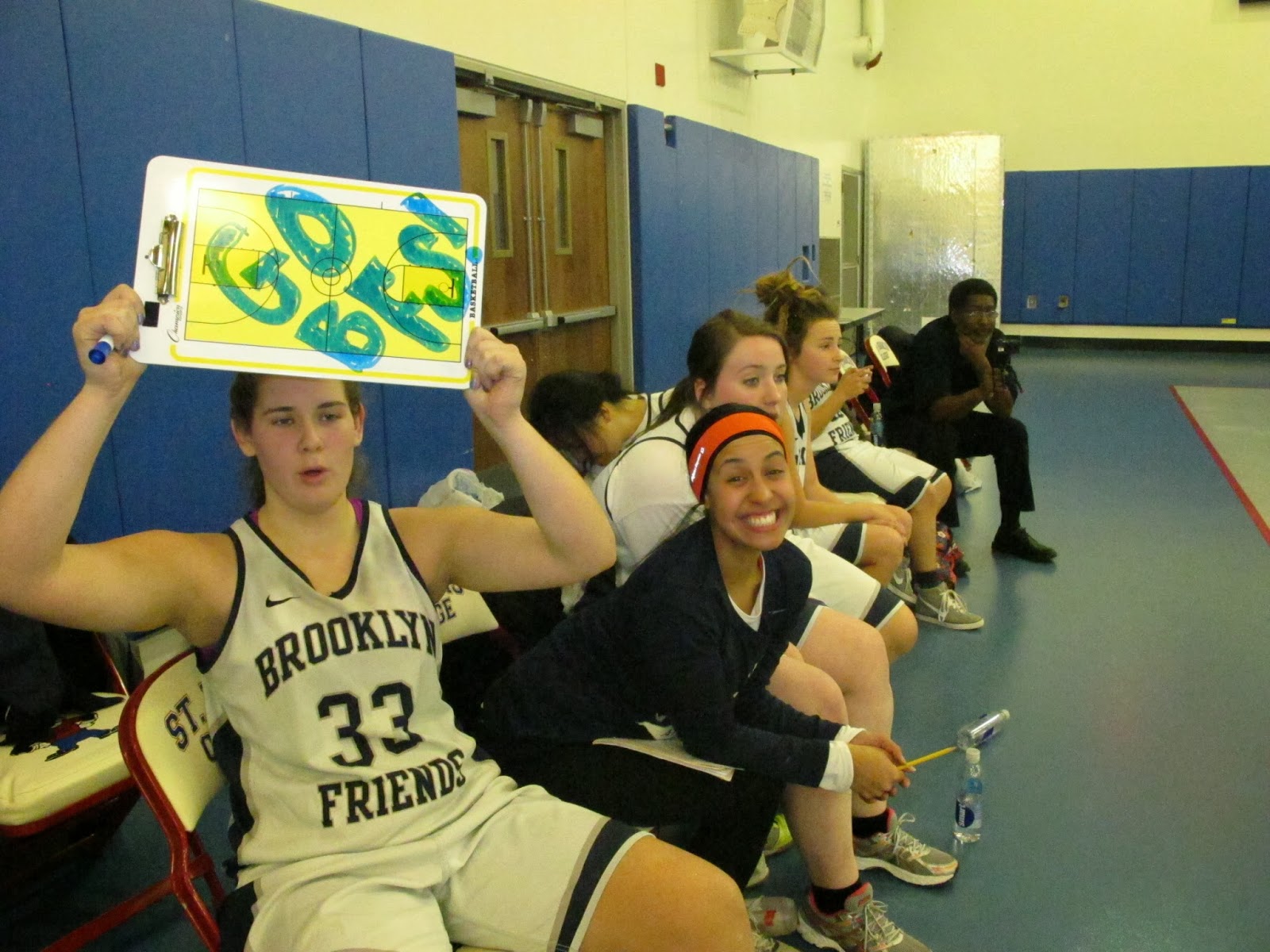 On Friday the BFS Girls Varsity Basketball team defeated Bay Ridge Prep 43-26 at St. Francis College.  The team had a strong overall performance.  They bounced back from their previous days loss.  The ball movement was probably the best it has been all season.  The team made the extra pass as they looked to get the ball to their teammates in the best position possible.  They ran some plays to perfection as the crowd enjoyed this one.  Their opponent played well and brought a lot of energy to the game.  The team found themselves up early as they closed out the first quarter with an 11-6 lead.    Four BFS players scored during the first quarter Julia B., Chloe B., and Ivy L. all had a basket, while Maret S-M hit a pair of jumpers including a three pointer.  The solid play continued into the second quarter as BFS once again scored 11 points, this time giving up 8 in the quarter.  Junior Julia B. led the way with 6 points in the quarter, while senior Chloe added another basket, and fellow senior Julia G. knocked down a three pointer from her favorite spot on the floor (the top of the arc). At the half BFS was up 22-13 and in control.  Another strong third quarter pretty much secured the victory as BFS scored 13 while holding their opponent to 4 points.  Julia B. added two more baskets to give her a game high 12 points , she also grabbed 8 rebounds, and had 4 assists.  Chloe B. added another basket and Julia G. added another one from long range.  Sophomore Abby M. arrived and joined in on the scoring with two baskets of her own.  After three quarters of play BFS led 35-17.  During the final quarter BFS managed 8 more points while giving up 9 points.  Julia B. rested during the final quarter, Julia G. knocked down her third three pointer to finish with 9 points and 4 assists, while fellow senior Chloe B. had one of her best games finishing with 8 points (one basket in each quarter). Sophomore spark plug Sierra V. made a nice three pointer from right in front of the teams bench.  The team will rest during the weekend and then get ready for a big game on Monday which has big playoff implications. Blue Pride Runs Deep, Friends Forever!!