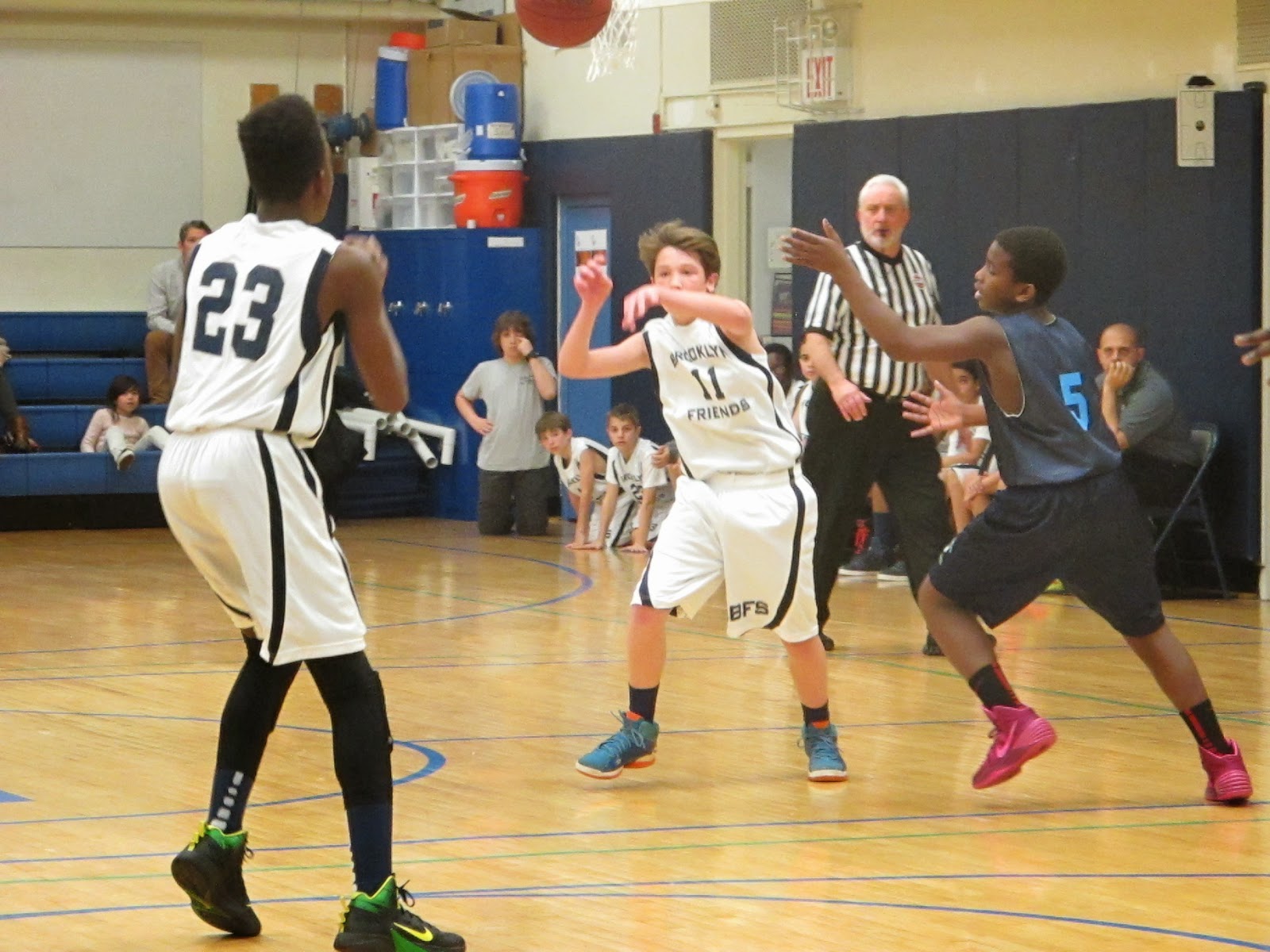 On Monday the BFS MS Boys Basketball Team defeated Berkeley Carroll 50-26 on the road.  The team opened up their season with the impressive victory. The team scoring was a balanced affair with 12 of the 13 players that saw time on the court scoring. The team was led offensively by 8th grader Daniel D. who finished with 11 points. There were impressive Panther debuts by a couple of 7th graders as Ty S. scored 10 points and had 2 rebounds and 4 assists. While fellow 7th grader Aja M. led the way in the rebounding department, grabbing 11 boards, while chipping in with two baskets and four points. 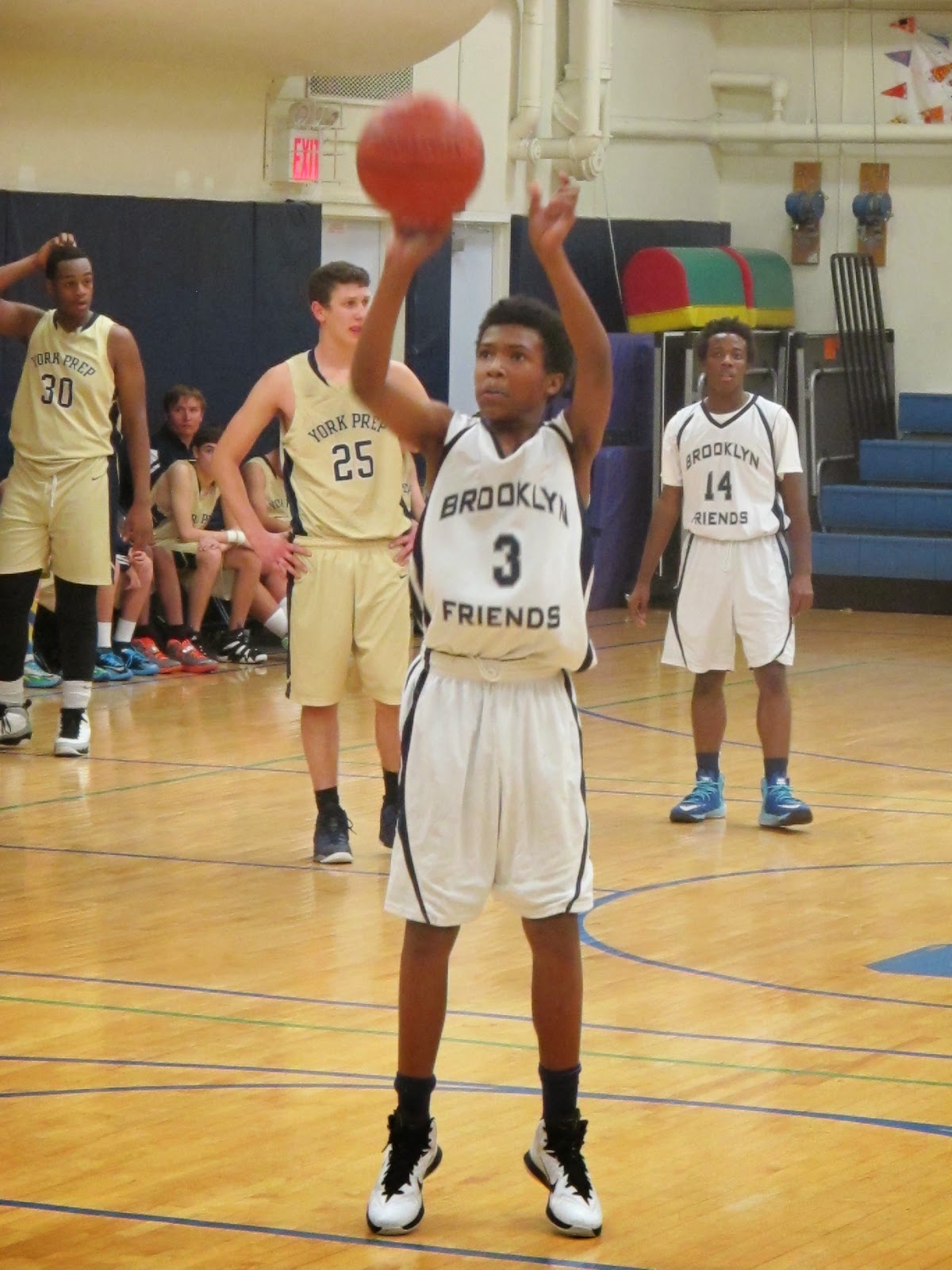 The BFS Boys JV Basketball Team defeated Birch Wathen Lenox 65-61 in overtime in the lower gym. The game did not start well for the Panthers. Their opponent, BWL, jumped out to a 19-1 lead within the first 6 minutes of the game. Ernest M. gave BFS a spark as he went on his own 6-0 run. The game would continue going up and down, and back and forth. BWL knocked down a big 3 to send it to overtime. BFS outlasted their opponent in overtime and hung on for the comeback victory. Miles B. led the way with 37 points. Sophomore Isaac H. continued to show his presence all over the court with 7 points, 12 rebounds, 4 steals, and 2 blocks. The Panthers will be back in action on the road today against Friends Seminary.  Go Quakers!! 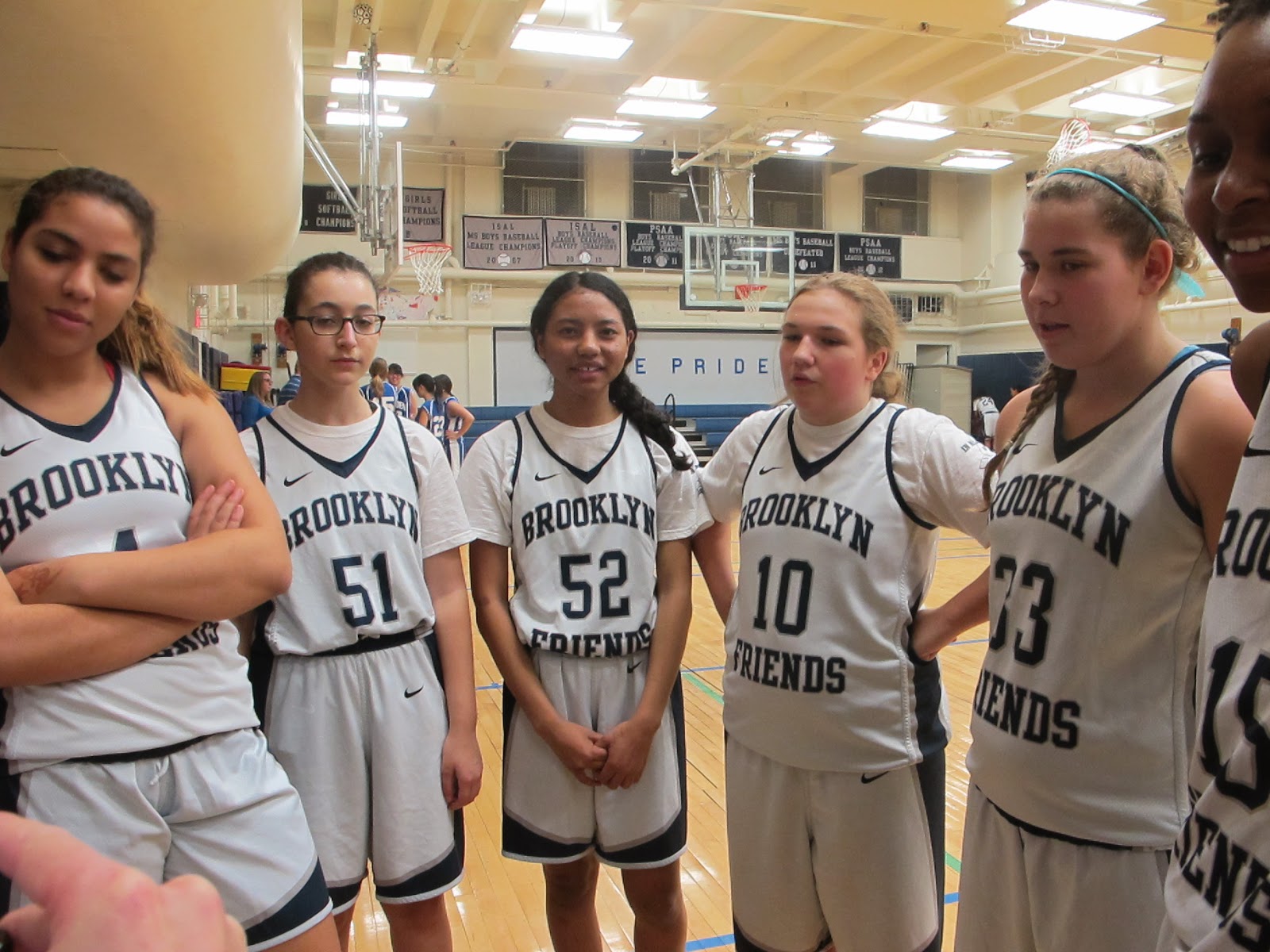 The BFS Girls Varsity Basketball Team defeated Garden 28-14 in the lower gym. It was a real team effort.  BFS started a new lineup. All 13 players contributed for BFS. Junior Xiana Q. started things off for BFS scoring her first basket of the season which gave BFS the early 2-0 lead. The new starting five kept shooting but the shots weren’t falling. BFS found themselves down 12-2 after one quarter of play as Garden caught fire knocking down most of their shots.  The second quarter was the exact opposite.  BFS turned up their defensive efforts and had 4 different players score at least one basket (Maret S-M had two) totaling 10 points for the quarter while only giving up two points. Down 14-12 at the half the team huddled up and regrouped. They went through an intense halftime warm up to keep their focus and look to bring the energy during the second half. The girls got off to a good start and tied the game early in the quarter and then took the lead for good.  Four different players scored for BFS to extend their new lead to 18-14 after three quarters of play.  Four more BFS players scored a basket during the final quarter. Sophomore Ivy L. knocked down a couple of sweat jumpers and finished the game with a team high 8 points. Fellow sophomore Silvely A. scored her second basket of the game to give her 4 points.  Junior Abby M. (5 rebounds) and senior Maret S-M also scored 4 points for BFS. Senior Julia B. chipped in with two points. Senior point guard Julia C. had 8 rebounds while running the earl offense for BFS. Junior forward Charlotte S. had 5 rebounds. Sophomore guards Fatima E-L and Monet M. both played great games and scored the final baskets for BFS on two smooth jumpers. I saw lots of smiling faces on the court. The team improved its overall record to 4-3 and are now 3-0 in ISAL League play. Next up will be ISAL opponent Bay Ridge Prep on Friday at St. Francis College. Tip off is scheduled for 3:45pm.  See you at the game. Blue Pride!! 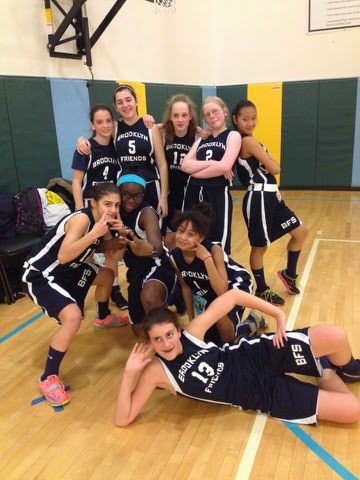 On Wednesday the BFS MS Girls Basketball Team defeated Leman Manhattan Prep 48-10 on the road.  The team picked up their first win of the season with the impressive victory. The team jumped out to an early lead and this time maintained the lead through execution and poise. The team found themselves up12-2 after one quarter of play. The second unit came in and continued the success of the starters, working the ball to low post where we clearly had an advantage. Led by eighth grader Devon O. the team went on to have a one sided victory. The team played well and we look to continue to play better each and every game. The 48 points scored is one of the most ever by a MS Girls Basketball Team at BFS. Congrats to all the players and Coaches. Next up is local rival Mary McDowell on Friday on the road. Blue Pride!! 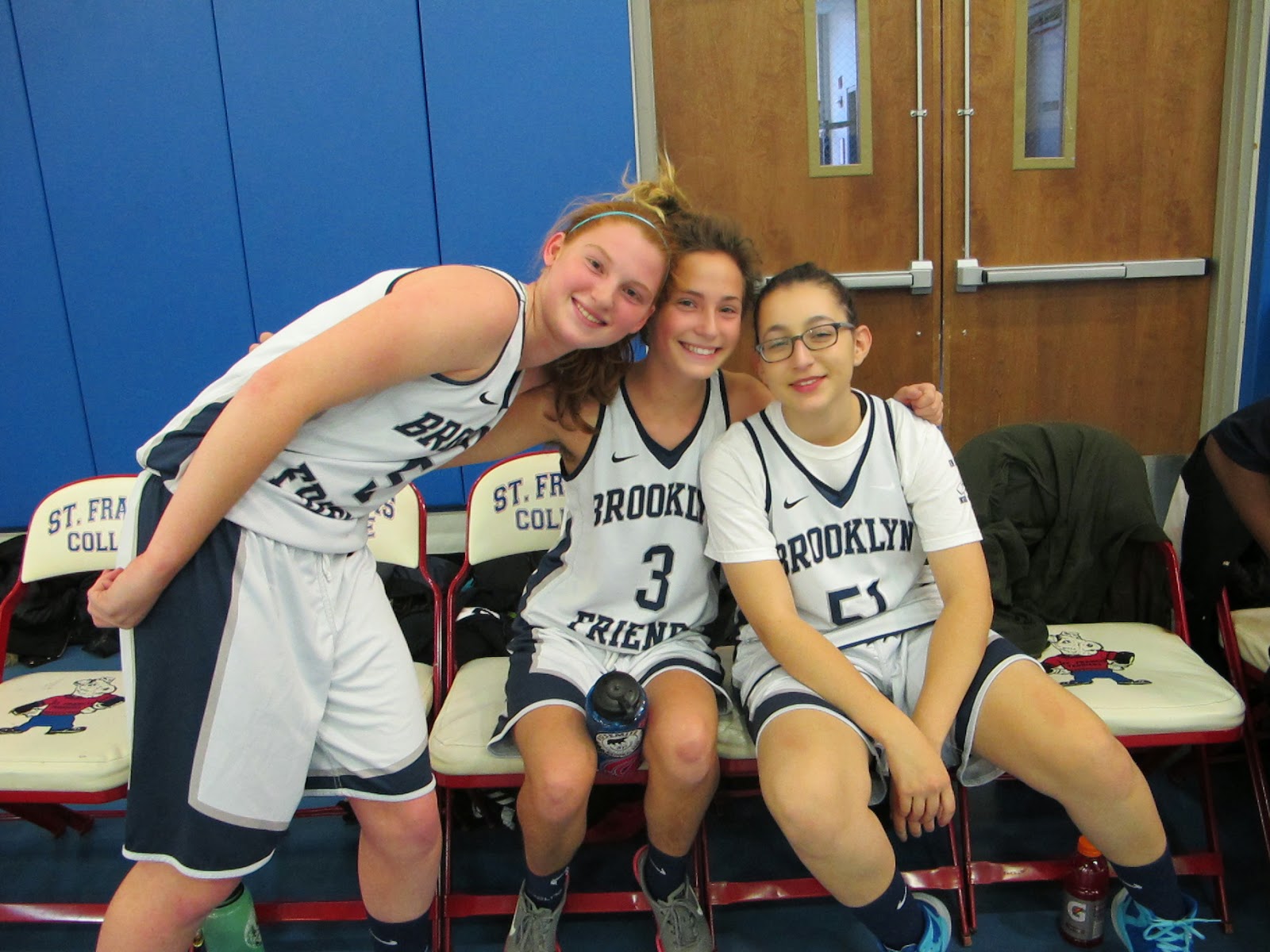 On Friday the BFS Girls Varsity Basketball Team defeated Bay Ridge Prep 24-9 at St. Francis College. This game lacked energy and enthusiasm. The BFS Girls who were in attendance looked tired form a long week. They did take care of business though.  Senior Julia B. and sophomore Silvely A. each scored four points during the first quarter to give BFS the early 8-2 lead. BFS was bale to score eight more points during the second quarter as Julia B. added four more points and Silvely knocked down two free throws, and fellow sophomore Ivy L. added two more with a sweet jumper. The team took a 16-5 lead into the half. The overall energy was still down and the coach was under weather. The girls just needed to come out and extend the lead to close things out and that is exactly what they did. Silvely took it to the basket on an impressive drive and knocked down a sweet jumper of her own. BFS did not let their opponent score during the third quarter. Up 20-5 with eight minutes to play, BFS continued to play solid defense and do just enough on offense to secure the important league victory. Silvely finished with a game high 10 points and had 4 steals. Julia B. had 8 points, Ivy chipped in with 2 points, and senior Julia C. also had a basket for BFS. The team picked up another ISAL League victory to improve to 4-0 in league play (5-3 overall). Next week is another important week for this team.  They have two big leagues games coming up on Tuesday and Thursday. Blue Pride!! 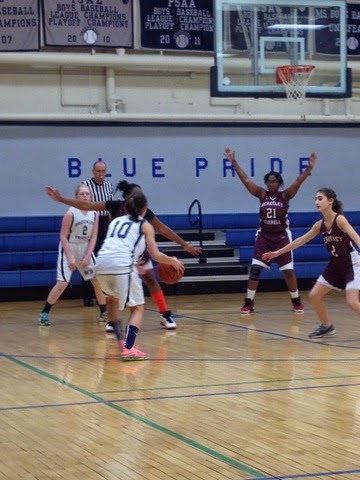 The BFS MS Girls Basketball Team defeated Brooklyn Heights Montessori 31-23 on the road. What a game! The teams opponent scored first but BFS was able to quickly answer with points of their own. BFS finished the first quarter on a 9-0 run to take a 9-2 lead of one quarter of play. At the half BFS found themselves only up by three points as BHMS fought back. BFS extended their lead by a basket as they let by five points, 22-17 after three quarters of play. The girls continue to progress each game. The coaches are looking forward to their continued improvement. It was a real team victory. The exciting and impressive win give BFS two wins to only one loss on the young season. See you next week. Blue Pride!!