Introducing Brooklyn Friends School’s new visual identity is exciting, yet it also makes us fondly recall logos from our past. Let’s take a look back at what can be considered our main logos through the years, beginning with today’s and ending with our earliest-known visual identity.

In our new visual identity, the banner represents academic excellence, a core value of Brooklyn Friends School, while the eight-pointed star signifies the inner light of every BFS student. The star also reflects our Quaker heritage: an eight-pointed star was first used by British Quaker relief workers in the Franco-Prussian War and later adopted by the American Friends Service Committee in its own logo. 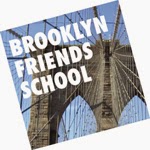 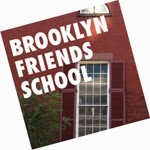 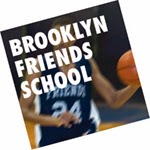 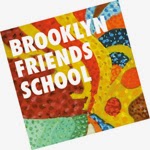 Over 20 different images provide glimpses into the BFS community, ranging from student artwork to BFS scenes; a few are below. “Windows” also saw BFS begin using the phrase “Inspiring minds and hearts since 1867.”

Designed by BFS alum parents Leo and Diane Dillon, noted artists and illustrators. This image was, at times, modified by students to reflect both our school’s and our student body’s commitment to equity and social justice.

Our school seal’s earliest known print usage is on a 1926 literary magazine, though it was likely around long before. The school seal was incorporated into the Class of 1927’s graduation gift to BFS, an artistic rendering of the Brooklyn Meeting House, still found on bookplates in some of our library’s oldest books.

Printed materials at BFS did not always incorporate our school’s visual identities. BFS letterhead apparently did not include images of any kind until 1975. Additionally, images were not used consistently in school letterhead during the 1990s. During this school year, BFS looks forward to fully incorporating its new visual identity into daily life of the school.