On Monday the BFS MS Boys Soccer Team defeated Packer 1-0 at Brooklyn Bridge Park. Today the team overcame local rivals Packer in a very close and tense encounter. The wind made playing conditions difficult, but BFS managed to get the ball under control in the early stages, and it wasn’t long before they were threatening the Packer goal. Miles B., Coby W., and Gabe D. were all unlucky not to add to their goal tallies for the season, and in defense some heroic tackling from Finn S., Aja M., Ty S., and Sam F. prevented BFS from falling behind. During the second half, the game opened up as both teams went for the win. Packer was awarded a penalty 10 minutes after the break, but failed to capitalize on their golden opportunity. Just when the game was heading for a tie, BFS broke the deadlock with 6 minutes remaining. Miles B. stole the ball in midfield and beat 2 defenders before slotting the ball inside the far post to put BFS on course for their 6th win of the season. BFS survived some late pressure from their opponents to ensure a very hard-earned victory. Blue Pride!! 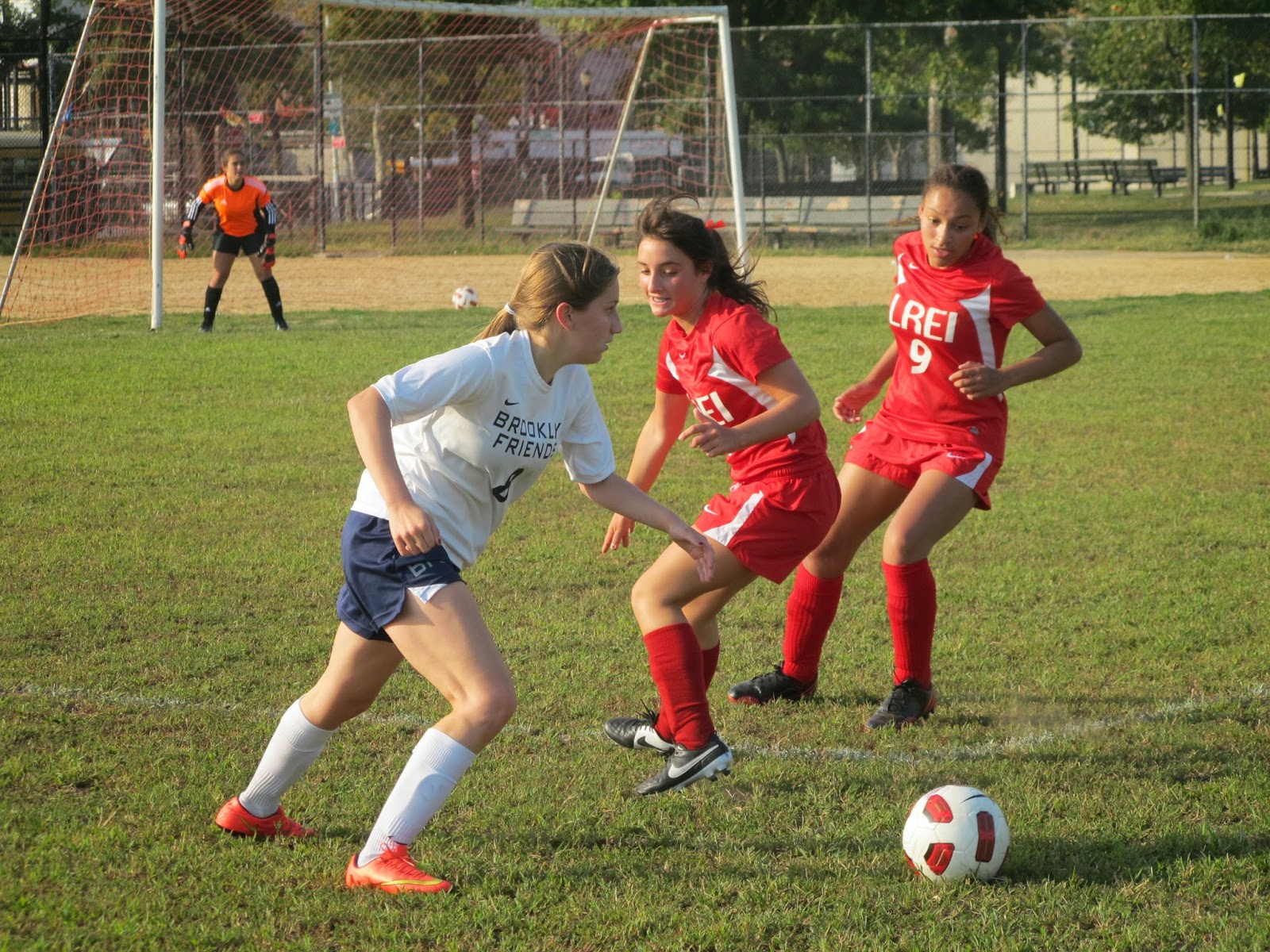 The BFS Girls Varsity Soccer Team defeated LWA 9-0 at Red Hook. Niamh H. scored her first high school hat trick to secure a comprehensive 9-0 victory against Lawrence Woodmere Academy. The teams win streak extends over 5 games and they have scored 36 goals during that stretch. There were seven other goal scorers, with Isabella G., Allie P., and Louisa G. scoring their first goals of the season. Molly R., Halima M., and Naya C. completing the scoring stats. 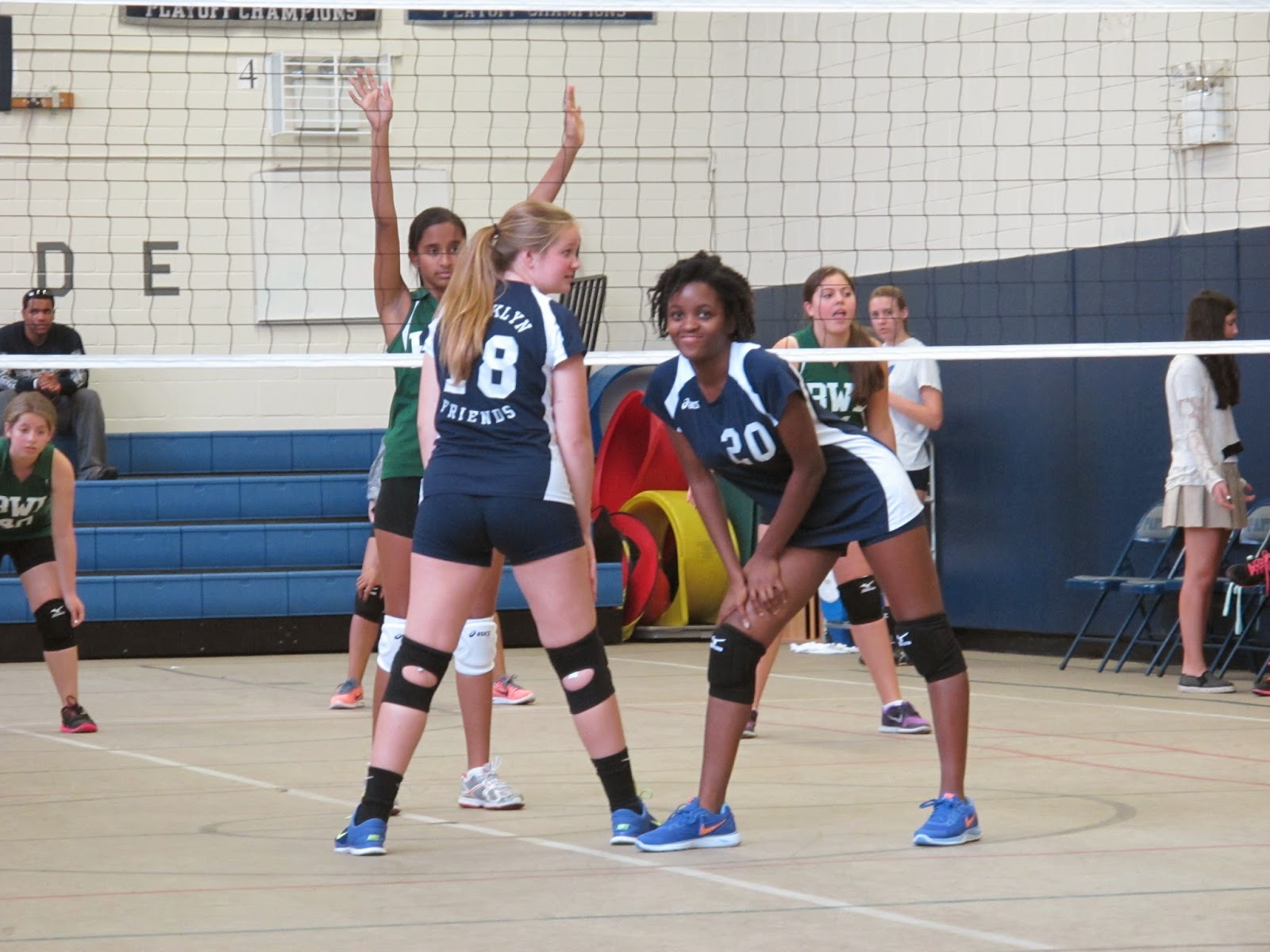 The BFS Girls JV Volleyball Team defeated Birch Wathen Lenox 2-0 (25-14, 25-13) in the upper gym. The team displayed a wonderful sense of calm and confidence, playing as one unit throughout the match. The team showed its depth, winning this match despite five players being absent. Joy F. and Zelda C. were our most successful servers, contributing nine and eight consecutive points for the Panthers. All in all, this was a fun win for the team. 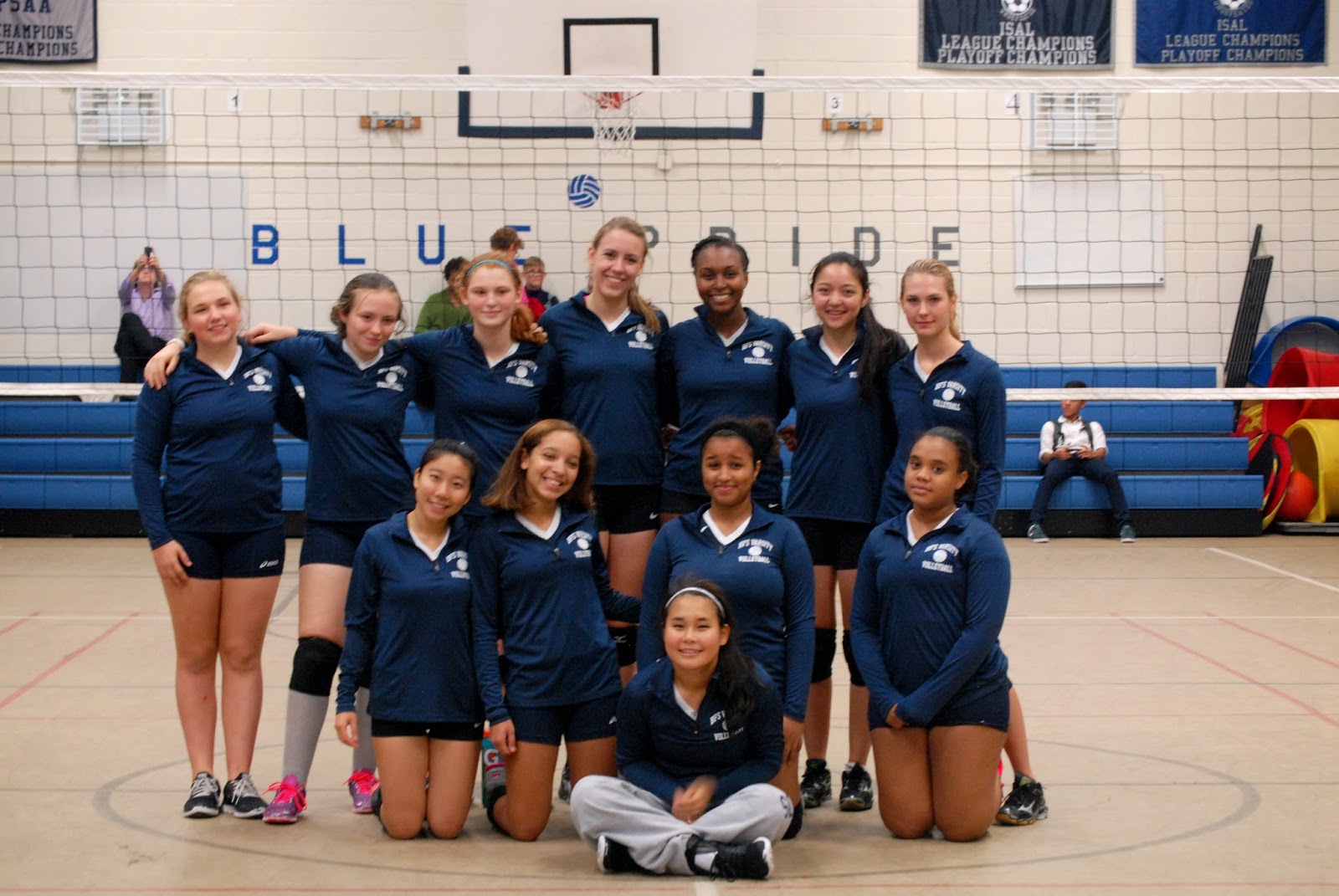 On Tuesday the BFS Girls Varsity Volleyball Team defeated Rudolph Steiner 3-2 (21-25, 25-18, 25-23, 19-25, 15-9) on the road at Pace University. Today was a great test of patience, mental strength, and will power against a very competitive team. BFS ended up on top winning a very tough match. It took a lot of focus and determination to outlast their opponent, who really wanted this game. After exchanging sets, BFS took over in the deciding 5th set, behind the strong serves of our 1-2 punch, Charlotte S. and Fiona S. Everyone had to play united and focused and pick up one point at a time. Great match, at a great time in the season…Blue Pride Runs Deep!! 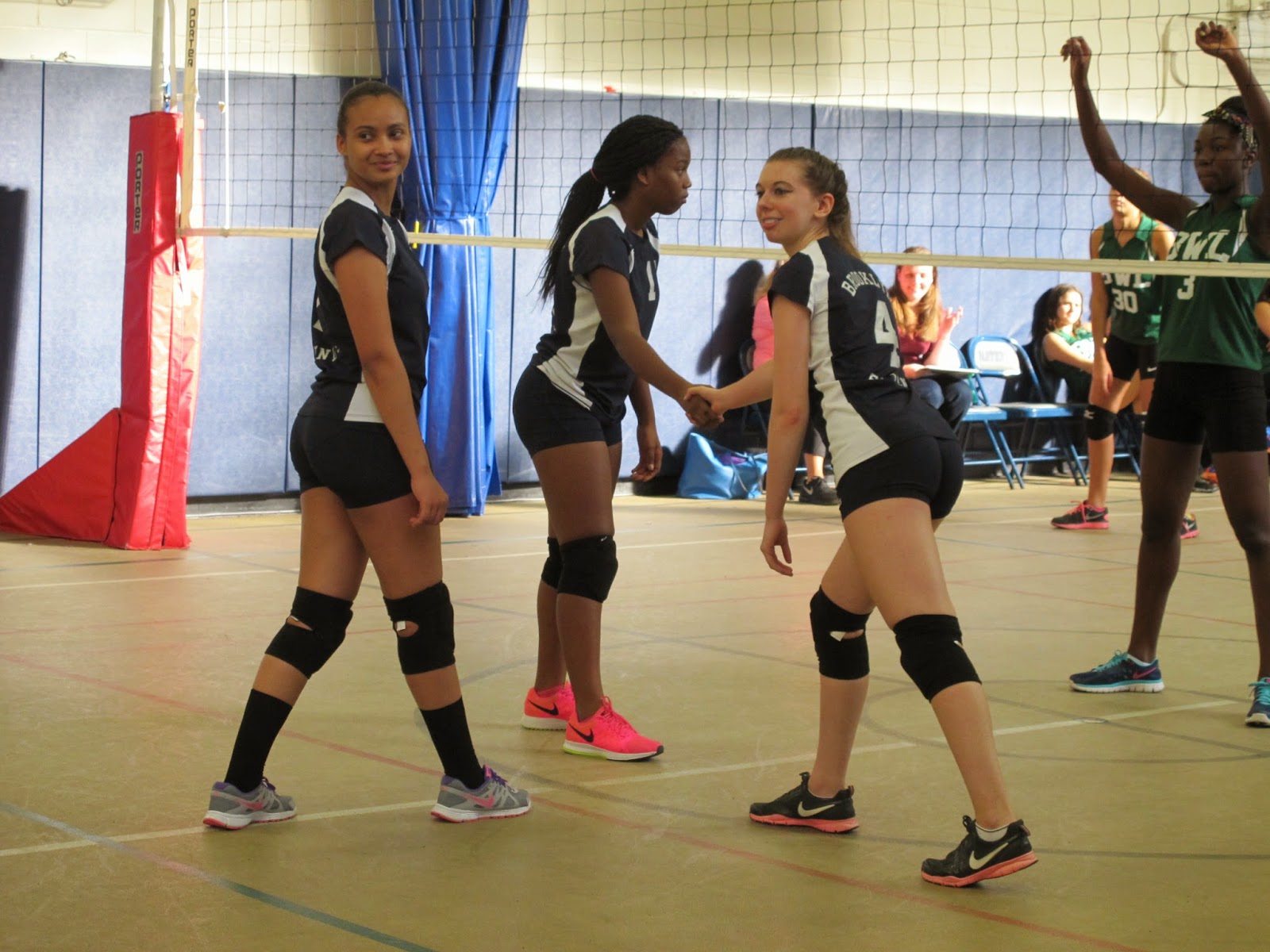 The BFS Girls JV Volleyball Team defeated Churchill 2-0 (25-22, 25-12) on the road. The team got off to a slow start in the first set, showing tension and tightness in their passing. They settled down at 22-22 and were able to pull ahead and earn the 25 – 22 win. The Panthers found their rhythm in the second set. The team is currently 5-0 in the ISAL League and looking to secure a spot in the upcoming play-offs. Blue Pride! 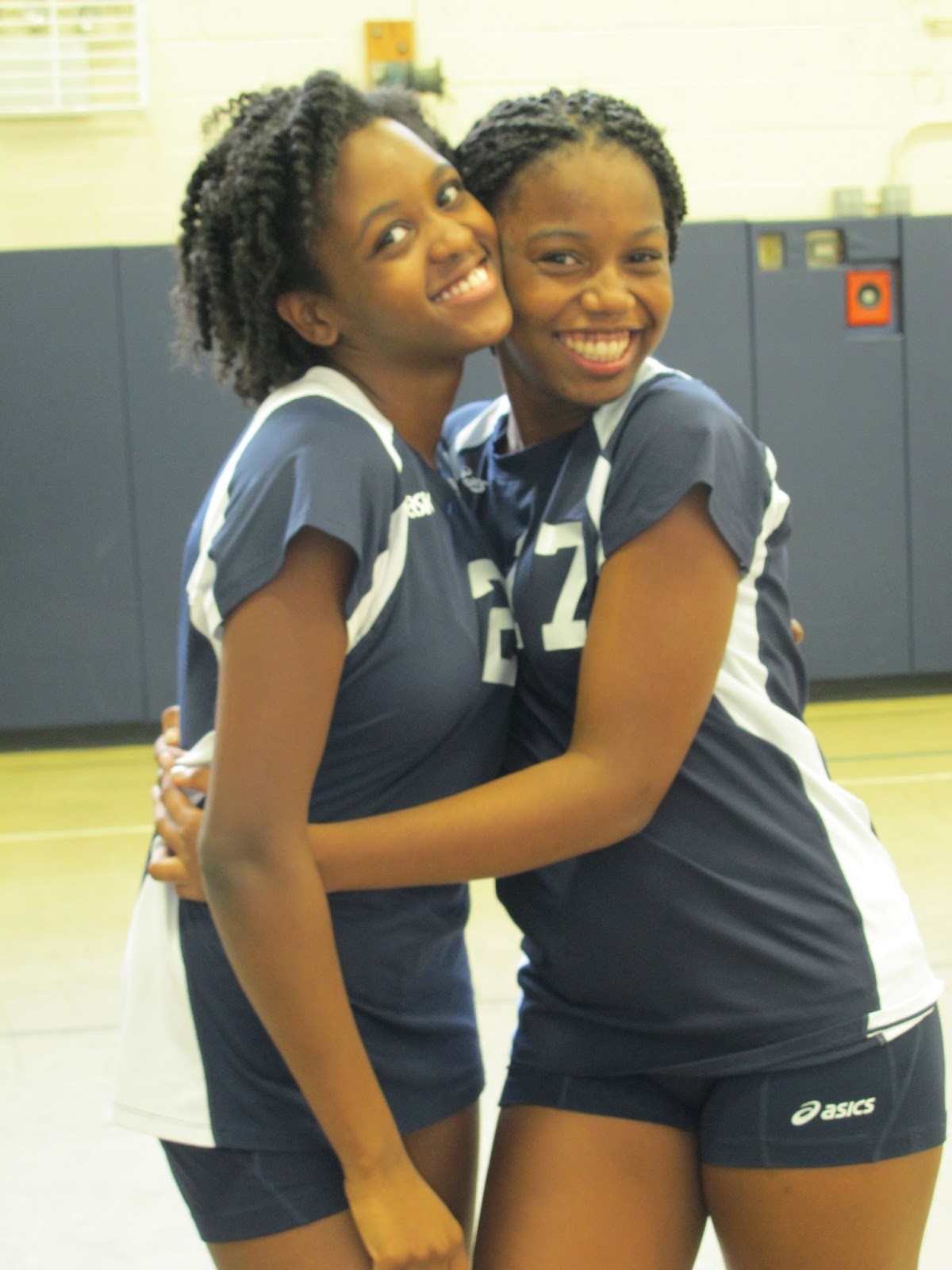 On Wednesday the BFS Girls JV Volleyball Team defeated Friends Seminary 2-1( 25-18, 23-25, 15-10) in the upper gym. The team won their match versus our fellow NYC Quaker School. Friends Seminary came to BFS with just 5 players, so we lent them a player in each of the three sets. BFS players Chelsea L., Miranda C., and Margaret C. all volunteered to play on the opponents’ side. The match was ‘friendly’ yet also competitive.  Thanks to everyone involved. 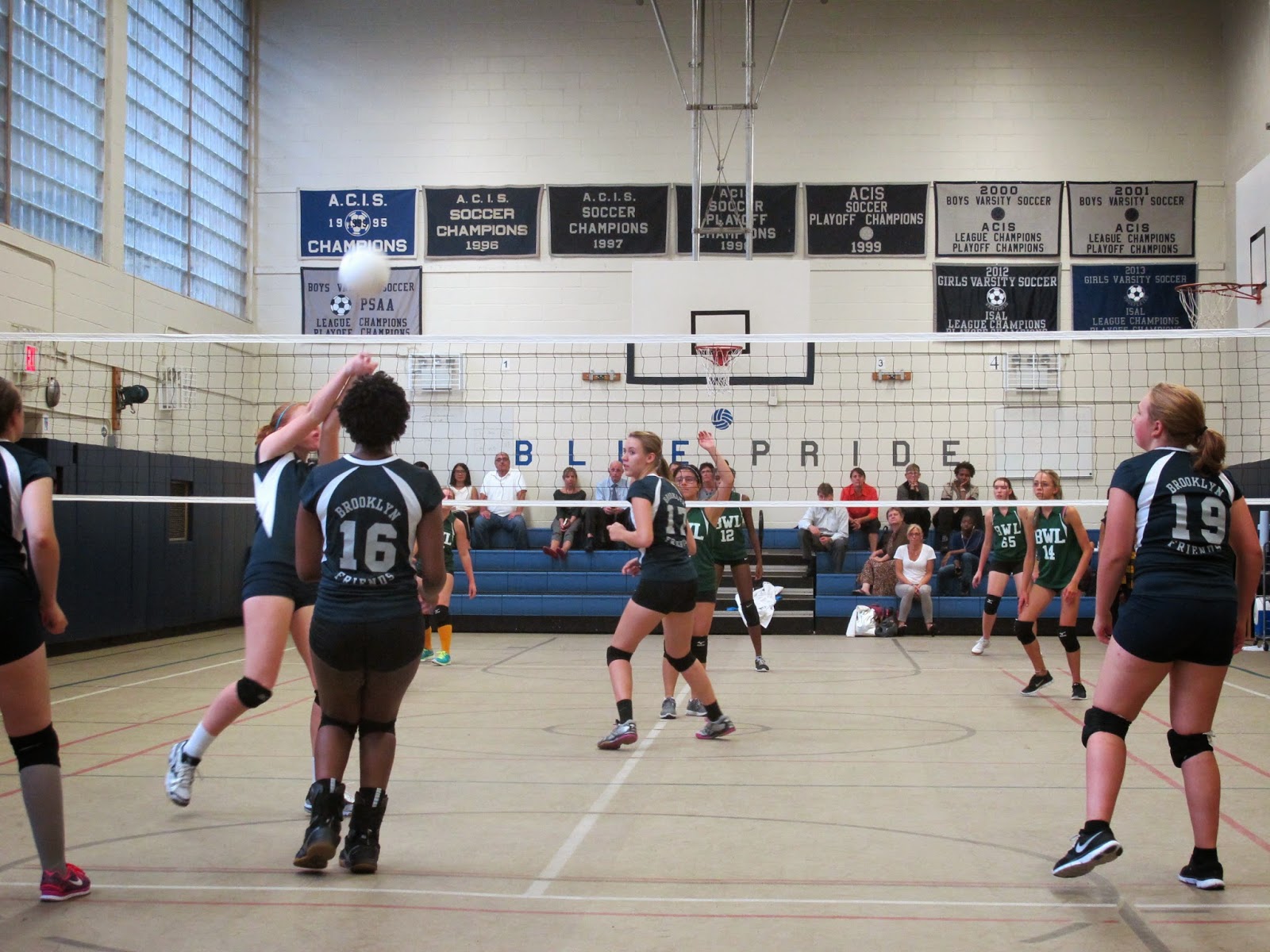 The BFS Girls Varsity Volleyball Team defeated Friends Seminary 3-0 (25-21, 25-21, 25-21) on the road. This was a great learning experience against a very competitive team. It was a good match up for BFS has they prepare for their playoff run. Against our fellow quaker opponent, BFS took care of the ball, played hard, and consistent throughout. The team served very aggressively during the match. The girls played well and the Brooklyn Quakers came out on top. 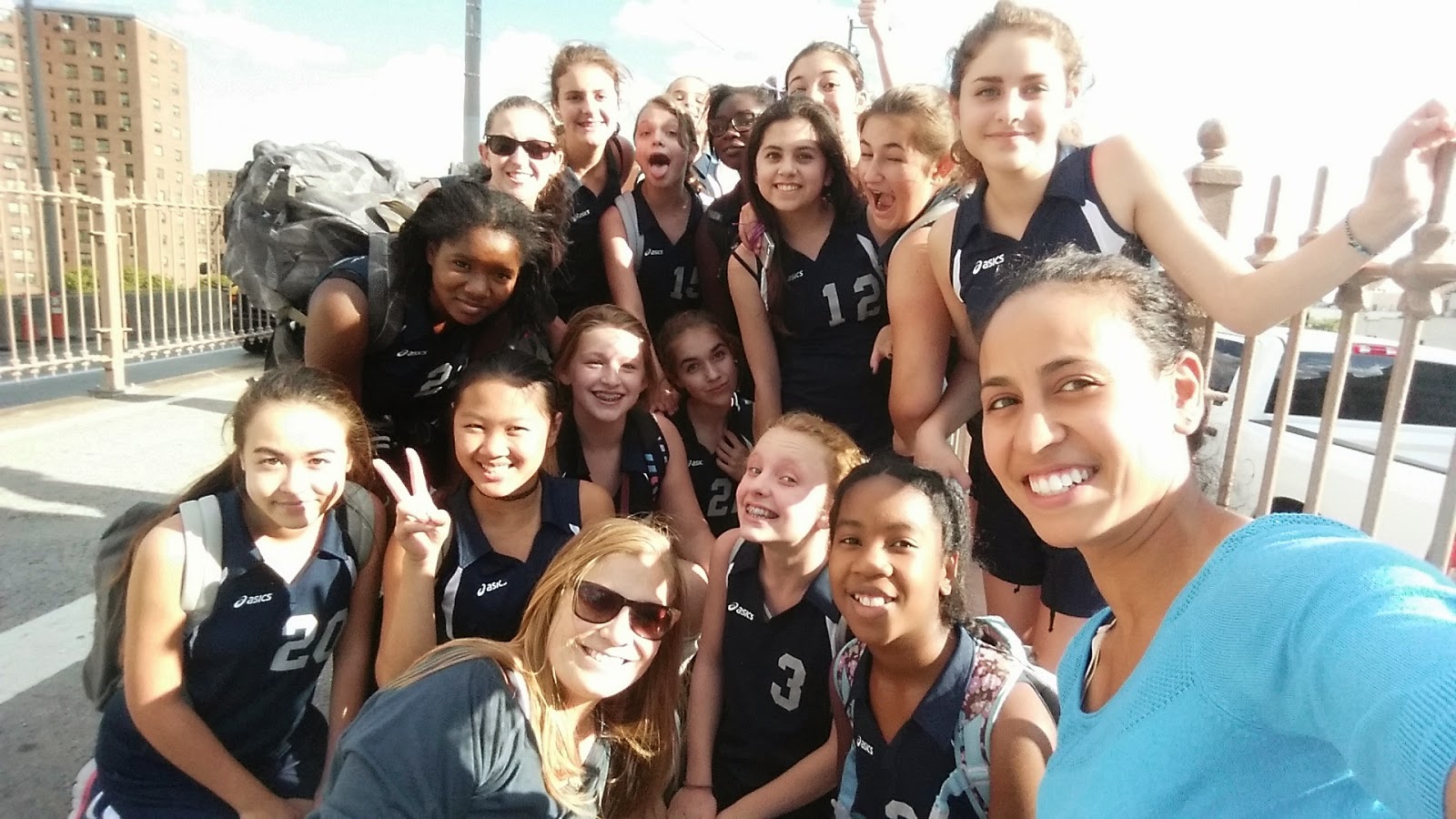 The BFS MS Girls Volleyball team defeated Rudolf Steiner 2-0 (25-16, 25 -21) at Pace University. The girls displayed great serving, Talula B. had a total of six consecutive serves, while Violet G. had 5, and Grace F. finished with four. Olufunke S. was able to get her first overhand serve over the net as well. Isabelle J. made some great sets helping the team get at least two touches. The girls made some great saves but the most exciting was Olufunke S. unbelievable save at the net. Way to go team!

The BFS Girls Varsity Soccer Team played to a 1-1 tie versus Friends Seminary down at Red Hook. Sophomore Halima M. netted her 25th goal of the season in a very close and competitive game. Both teams squandered opportunities to score a game-winning goal, but two great goalie performances kept it all square. BFS came closest by hitting the crossbar late in the first half. An outstanding save from freshman Molly R. prevented Friends Seminary from taking the lead. The game ended in a quakerly tie.

The BFS MS Boys Soccer Team defeated Friends Seminary down at Red Hook. Today the team came through a stern test against their fellow quaker opponent. BFS looked comfortable in the early stages and got behind the oppositions defense on several occasions. Unfortunately, they were unable to capitalize on their dominance, and were made to pay the price midway through the first half. Friends Seminary took the lead after their striker pounced on a stray pass, and BFS had their work cut out to find a way back into the game. However, the 5 minutes before halftime proved crucial as BFS turned the game around completely. Miles B. found himself in space in the penalty area, and his lofted cross from the right was headed in from close range by Gabe D. A few minutes later Lewis W. reproduced the magic he conjured up against Churchill last week by curling a free kick from the edge of the penalty area into the top left hand corner of the goal. From this point on, BFS never looked back. On 45 minutes they earned a two goal advantage as Miles B. won the ball on the right side and fed Coby W., who scored from the tightest of angles. Miles B. himself rounded off the scoring for BFS as he intercepted a clearance from the Friends Seminary defense, and calmly slotted the ball into the bottom left corner to cap another fine display for the middle school boys. Blue Pride!! 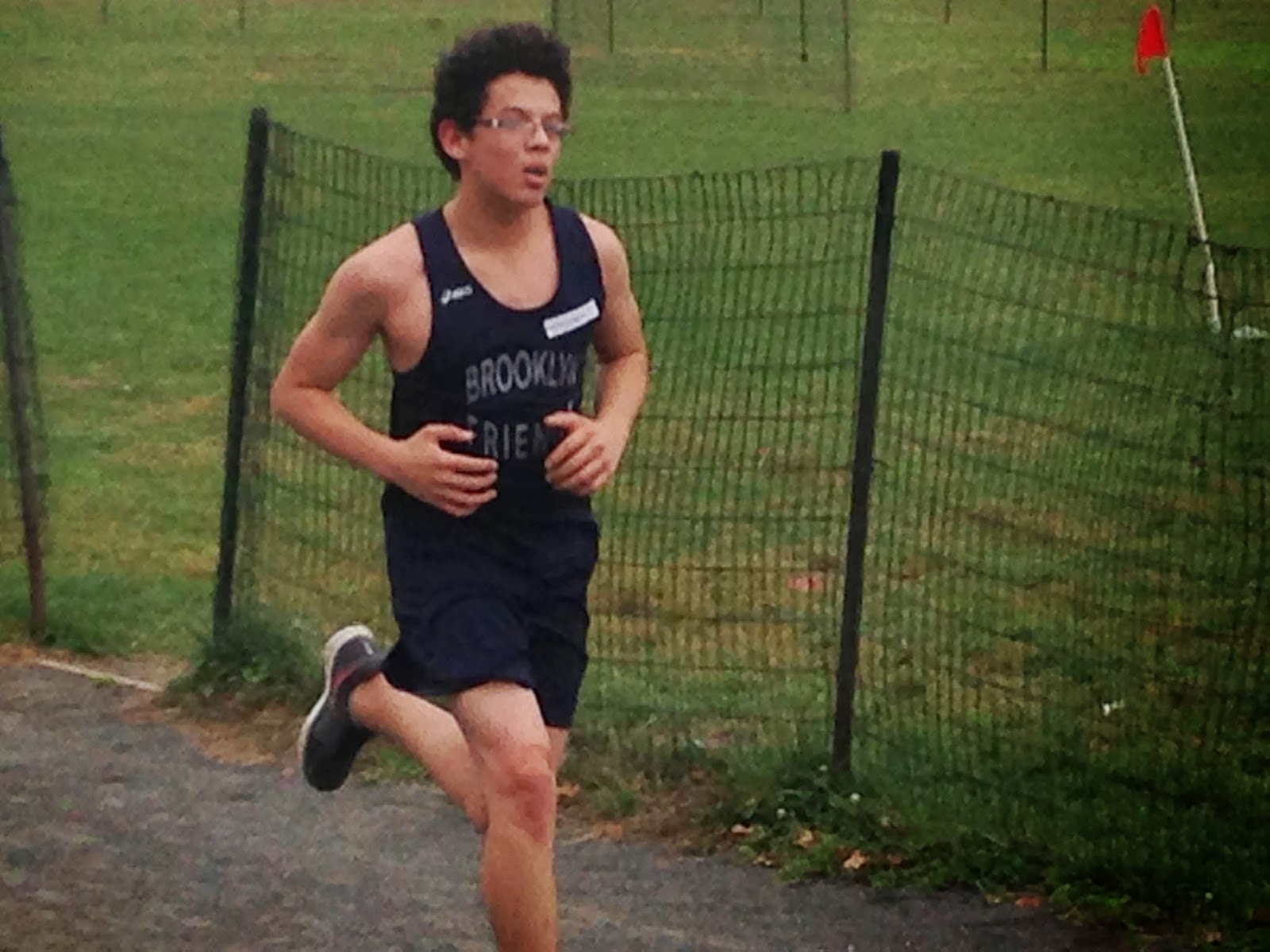 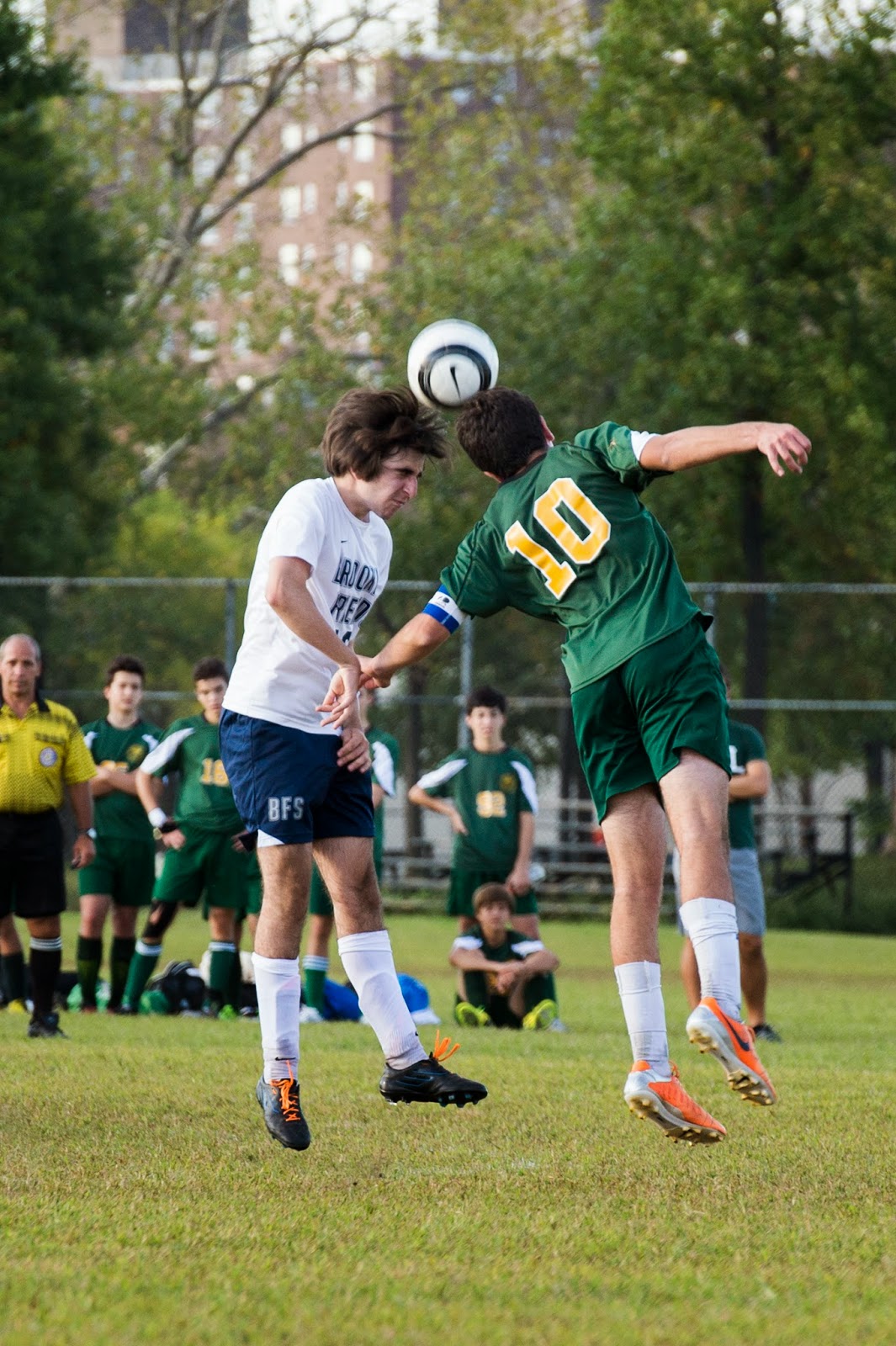 On Friday the BFS Boys Varsity Soccer Team defeated Staten Island Academy 5-0 on the road. The team earned their seventh win of the season with the victory. This was the second meeting between the two teams, with game one ending in a 2-0 BFS win. The Panthers got things going from the very start, with junior Henry K. lifting the ball over the goalie from about 35-40 yards out that was assisted from a headed pass by fellow junior Noah W. In the sixteenth minute senior Lucas M. stepped up to smash in a penalty kick that was awarded to the Panthers. The boys kept things rolling into the second half by not taking their feet off the gas. The second half saw goals from Quran D. (assisted by Henry K.), Justin W. (assisted by Noah W.) and finally, Henry K., who scored his team leading 14th goal of the season and was assisted by Lateef F. Honorable Mentions: Goalie Thomas C. (shutout), Isaac H., Sam H., Omar M., and Colin P.