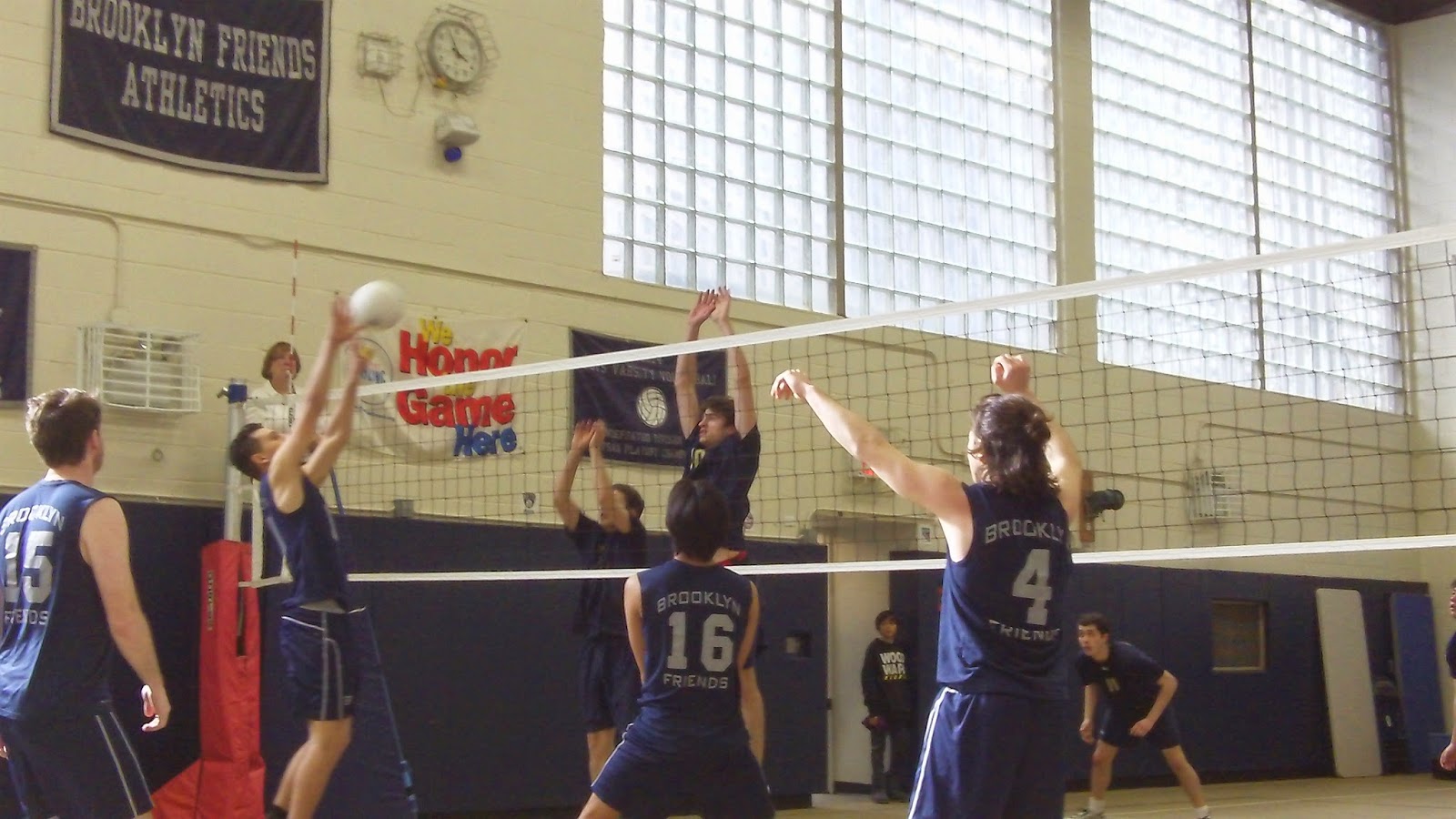 On Monday the BFS Boys Varsity Volleyball Team defeated York Prep 3-0 (25-19, 25-23, 25-15) in the upper gym. It was close and competitive match. BFS played inconsistently through the first half of each set, but stepped up during the match whenever needed. It was another good learning experience for our squad at this point in the season. BFS had good balance on offense, with Thomas C. and Phillip C. connecting for 10 kills each; Chris B. and Lucas M. added 5 and 6 kills, and Griffin E. had 25 assists. Tyler V., Julien B., Kamal G., and Ernest M. provided great plays defensively. Overall, the team continues showing signs of progress. Blue Pride!! 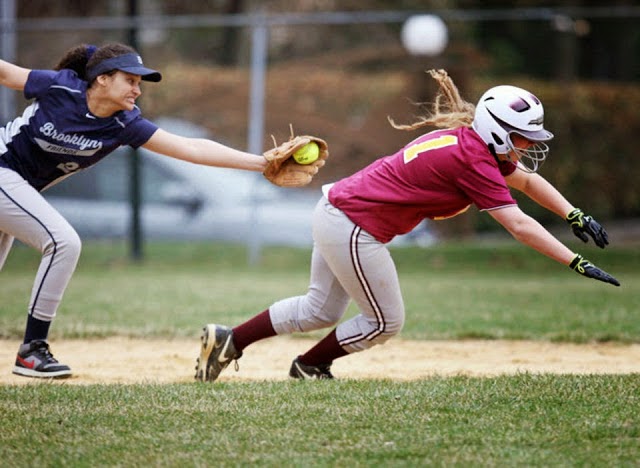 The BFS Girls Varsity Softball Team defeated Martin Luther 11-8 at Van Voorhies. The sun was out and it was the best day of the season weather wise so far. The team got off to a great start but had to fight back after giving up the lead in the middle of the game to secure the come from behind victory. BFS opened up the game by retiring their opponents first three batters as junior pitcher Taty R. recorded a couple groundouts and a strikeout. Then BFS compiled a bunch of hits and walks to produce seven first run innings. Martin Luther fought back with four runs of their own in the top of the second inning and BFS went down quietly during the bottom half of the inning. BFS sent out senior Julia B. to take the mound. Martin Luther added a fifth run in the top of the third to make it 7-5 after three innings of play. BFS struggled during the top of the fourth and gave up the lead as their opponent scored three more runs to take a 8-7 lead. BFS could not find its way across the plate since the first inning. Luckily for BFS the team maintained its composure, utilized its experience, and had Julia B. settle in and retire the Martin Luther batters. Going into the bottom of the 6th inning and BFS still down a run they sent up the top of the order to start things up. Senior Maret S-M calmly singled to get things going. Taty took a walk.  Sophomore Silvely A. smashed a RBI double to tie the game. Julia B. struck out but reach first base on an error. Sophomore Ivy. L came up big with a RBI single. Senior Julia C. laid down a nice bunt to help out.  Senior Ariel G. hit a hard grounder that was fielded by Martin Luther but two BFS runners were able to score during Ariel’s at bat. BFS had regained the momentum and all they needed were three more out on the picture perfect spring day on the Brooklyn waterfront. Julia B. threw strikes and got the first batter to line it back to her on the first pitch for out number one.  On the second pitch she got them to pop out to first base. Then she walked one of their batters before recording the final out herself with a strikeout. It was a great come from behind team win. Blue Pride!! 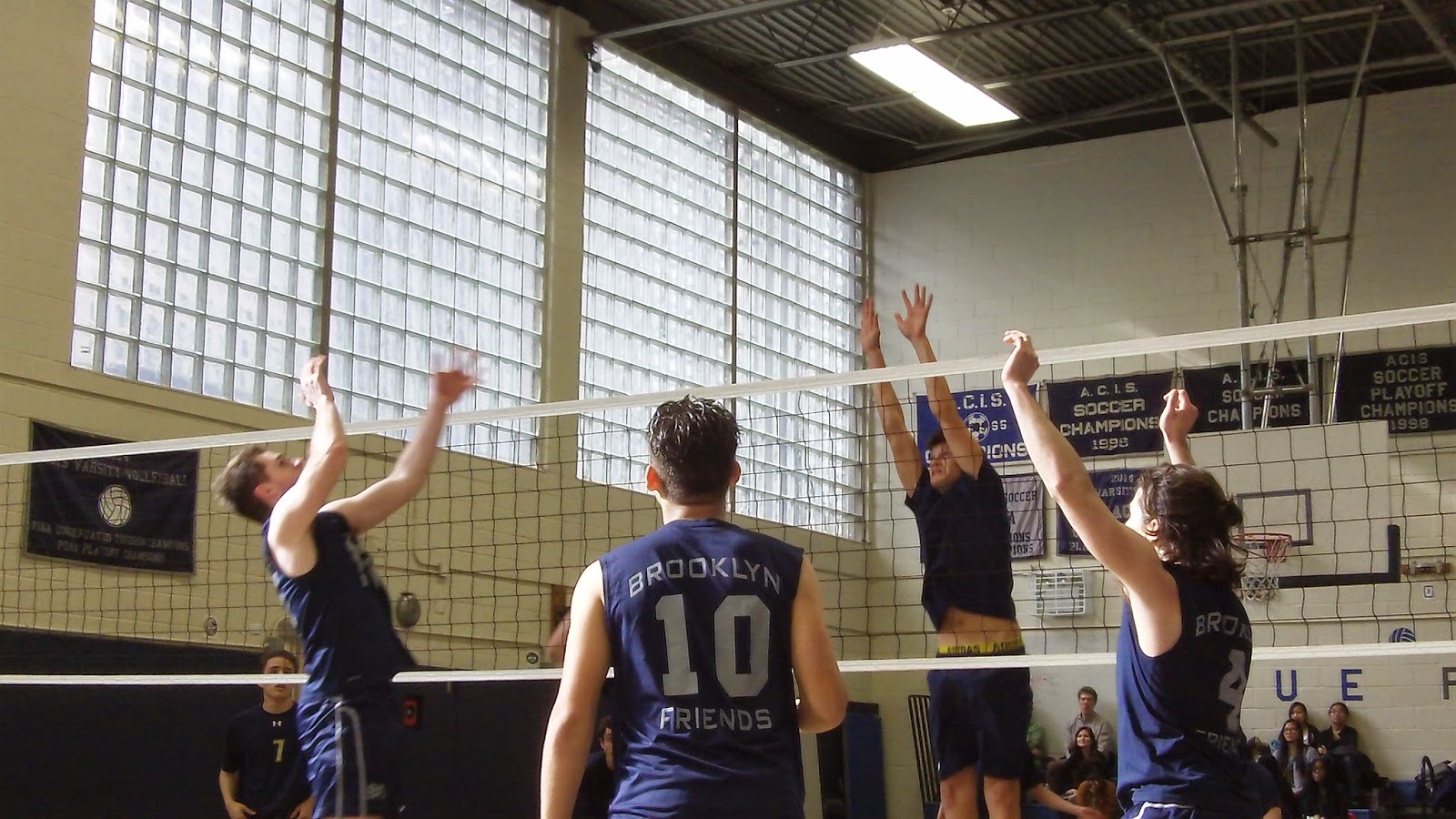 On Wednesday the BFS Boys Varsity Volleyball Team defeated Berkeley Carroll 3-0 (25-9, 25-13, 25-8) on the road. The team improved their ability to stay focused and consistent against a very inexperience team. It was nice team effort. Although the pace of the game was a little slow, everyone played hard, and maintained their focus and determination. Thomas C., Julien B., Tyler V., Chris B., Phillip C., and Griffin E. combined for 13 kills. Thomas and Tyler also added 19 aces. Griffin and Chris also contributed at the net with 4 blocks. Overall another productive team effort. Blue Pride!! 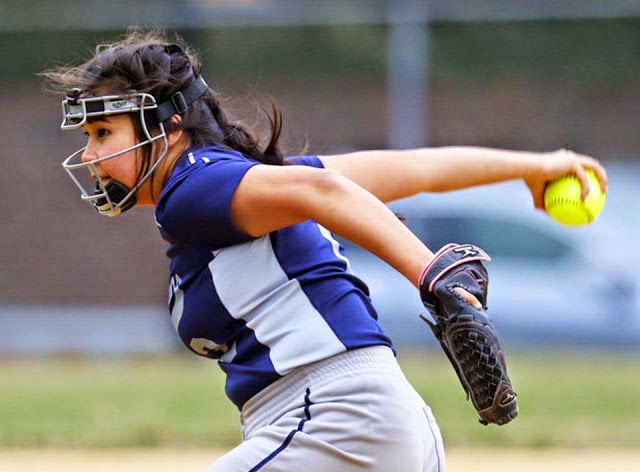 The BFS Girls Varsity Softball Team defeated LREI 23-10 at Van Voorhies. Another great day at the field. BFS was taking on the ISAL Champions of the previous two years (we lost to them both times in the finals).  BFS got off to a good start as LREI’s pitcher tried to find her rhythm. Even though lead off batter Maret S-M struck out she worked the count to full and battled. Then Taty R. hit a sharp grounder to third and their third base woman made a very nice play. So there were two outs but their pitcher wasn’t consistently in her zone and were making contact and already hit a nice shot. Sophomore Silvely A. came up with a huge hit and then we sent her in motion and she stole a couple of bases. Clean up batter Julia B. was hit by a pitch. Silvely stole home and BFS was fired up. Ivy L. followed up with a walk and Julia B. also was able to steal home. So BFS was in good shape as they plated two during the top of the first inning. BFS got into some trouble in the bottom half of the inning as LREI’s first two batters singled. BFS maintained their composure and once again used their experience as Maret made a play at second base, followed by a great catch by senior Greta L. in leftfield, and a liner that was snagged by Julia B. at third base. So after one inning of play BFS was up against league rival LREI 2-1. Both teams went down quietly during the second inning but BFS needed a little help as they once again got into a little trouble but due to a base running mistake by their opponent BFS was able to turn a very important double play. Junior pitcher Taty R. was having her best game at this point as she was throwing the majority of her pitches for strikes. So we move to the top of the third inning and BFS still up 2-1.  Freshman Rosemary D-C who has really stepped up into her role and has been the “most improved” player up until this point stepped into the batters box nervously.  She calmly smacked a single down towards third off the best pitcher in the league.  BFS was back in action.  After a fields choice by our leadoff hitter Maret, Taty smacked another single driving in Maret. The game was about to change. Taty ended up on third base after a couple stolen bases and then BFS being aggressive on the bases with their opponent having such a strong pitcher once again tried to steal home. Taty just beat the throw on a passed ball as she properly slide into home and was tagged a split second late by the LREI pitcher who tumbled to the ground during the play.  Their pitcher would not be able to continue and had to watch the rest of the game from the bench. Up 4-1 BFS took advantage of a string of walks and opened the game up. LREI tried another pitcher the next inning and this time BFS took advantage of a string of hits, smashing hit after hit to the outfield. LREI fought back during the bottom of the fourth as BFS struggled to make a few basic plays and gave back six runs. But the damaged had already been done with BFS’ big third and fourth innings.  Both teams scored a couple more runs at the end and the game was over in BFS’s favor. Everyone contributed to the teams success. It was a big league win for the team as they picked up their third victory in a row and are now 2-0 in ISAL league play.  Next league game today. Blue Pride!! 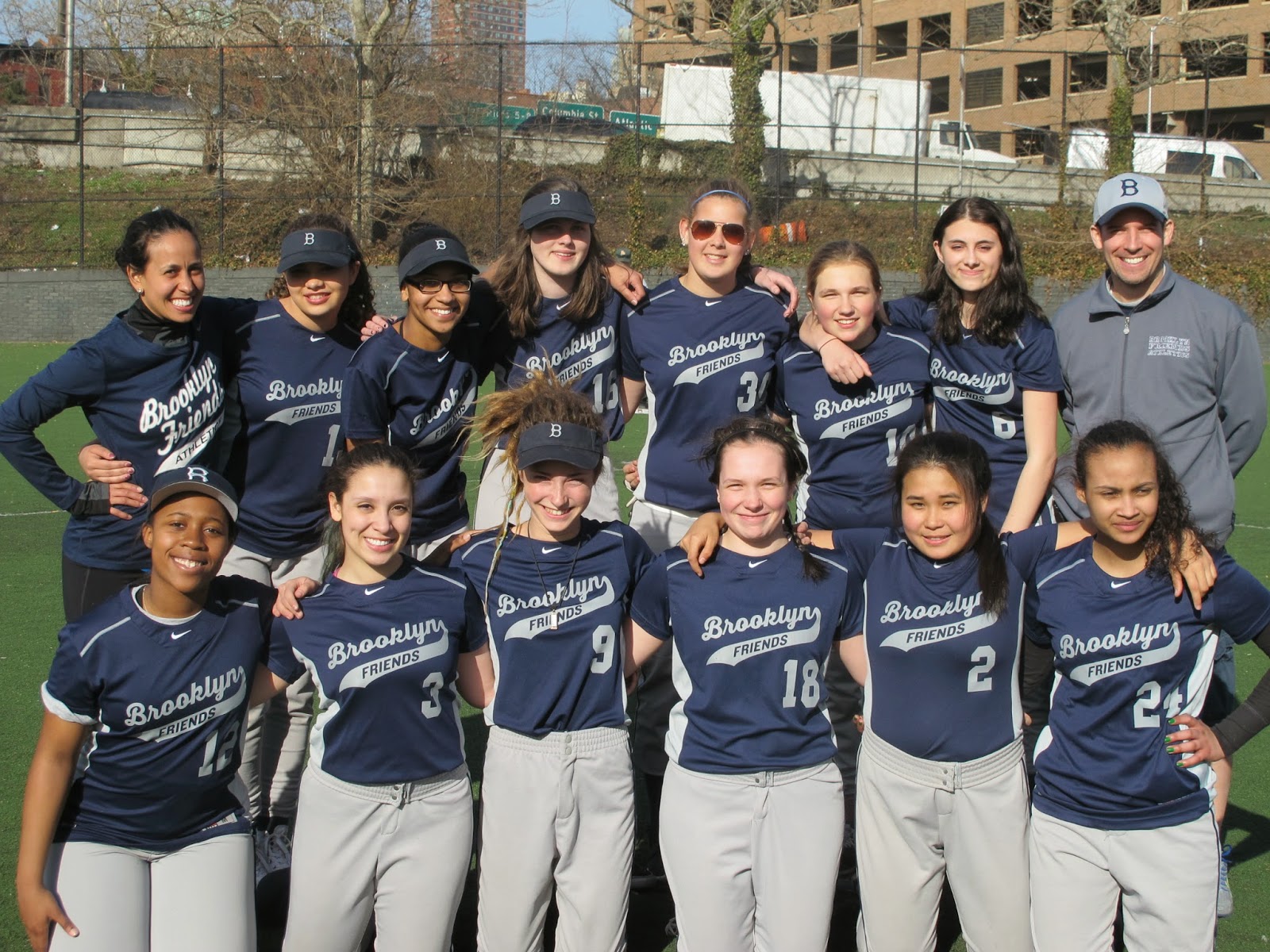 On Thursday the BFS Girls Varsity Softball Team defeated Bay Ridge Prep 9-0 at Van Voorhies. A great game to cap off a great week. BFS looked sharp as they took the field on Thursday. Having already picked up two nice wins earlier in the week BFS saved its best for this one. Junior pitcher Taty R. was on her game, throwing strike, after strike. She mowed down her opponent with the help of extremely solid team defense. She faced three to five hitters each inning and was able to shut down Bay Ridge Prep with a 78 pitch complete game performance. In doing so she only tallied one strikeout (and only gave up two walks), so that meant the defense was on point. It starts with a solid catcher in senior Julia C. who is an anchor. First base woman, sophomore Ivy L. had a flawless game. Her teammates, senior second base woman Maret S-M, junior shortstop Silvely A., and senior third base woman Julia B. were vacuums and fired strikes to first all day. They also corralled some pop us and line drives. Taty also defended her position making put out, after put out. On the offensive side of things BFS was able to pick its spots and score some key runs along the way against a solid opponent and pitcher. BFS picked up four runs during the second inning, one run in the fourth, and four more during the fifth inning to grab a comfortable 9-0 lead. With Taty on her A+ game BFS didn’t need much to breeze by their opponent in a well played game that took just over an hour to complete. Maret, Taty, Julia C., and Airenakhue each picked up two hits apiece, while Ivy led the way going 3-3 with a nice double. BFS improved to 4-1 overall with the three wins this week. They are currently undefeated in league play. Next up will be a non-league game on Monday, followed by another league game on Wednesday. Blue Pride Runs Deep, Friends Forever!! 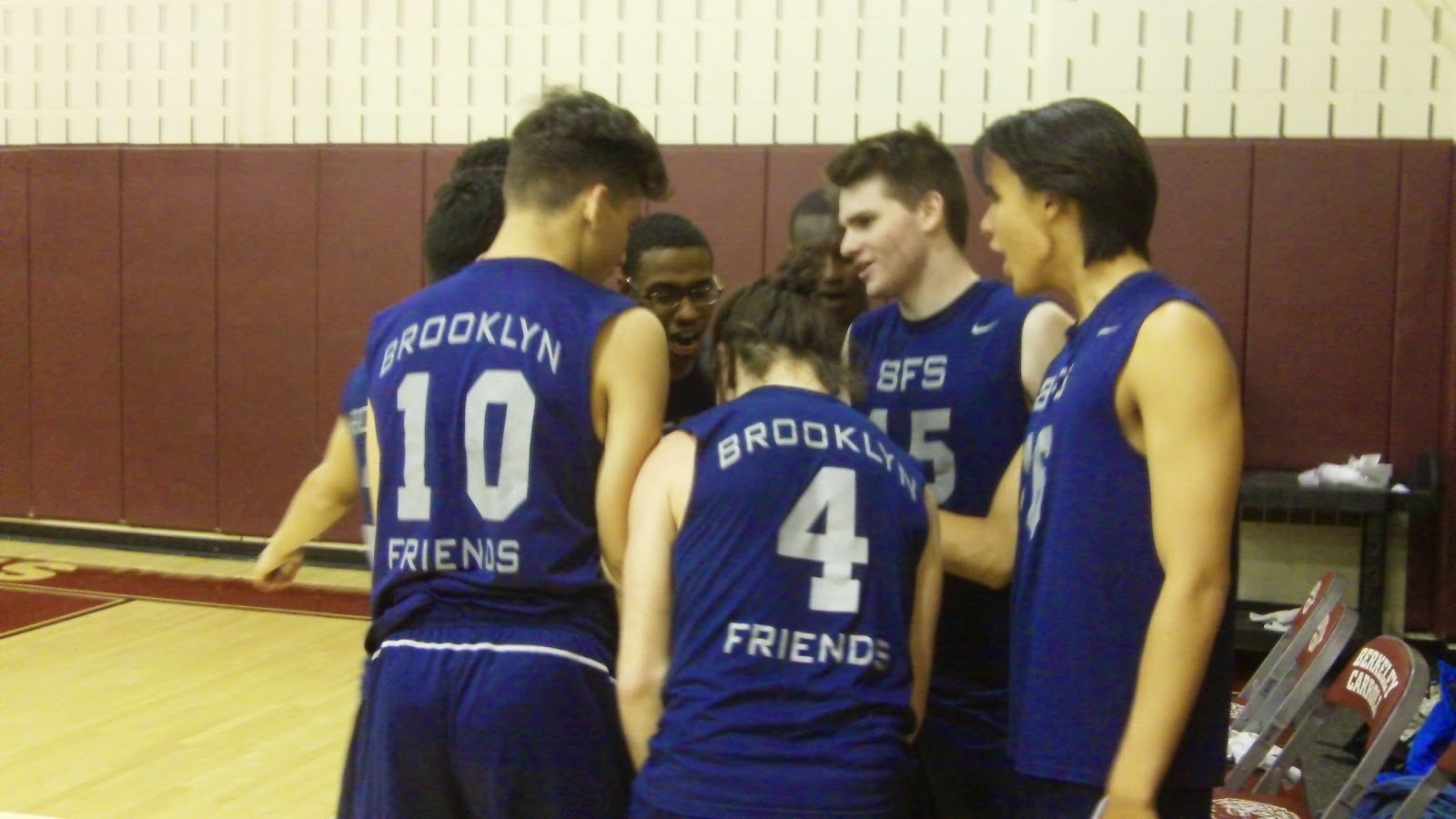 On Friday the BFS Boys Varsity Volleyball Team defeated St. Ann’s 3-0 (25-7, 25-14, 25-8) on the road. It was a great way to finish to a successful week. The team played hard, stay focused, and improved with transition. Everyone gave great effort and communicated throughout the match, supporting each other, and taking care of the ball. Griffin E. had 21 assists and 4 aces. Our middle hitters Chris B. and Phillip C. combined for 14 kills and 7 blocks. Our outside hitters Thomas C., Lucas M. and Tyler V. added 22 kills. Kamal G. and Ernest M. provided great serving and defense. Blue Pride!!