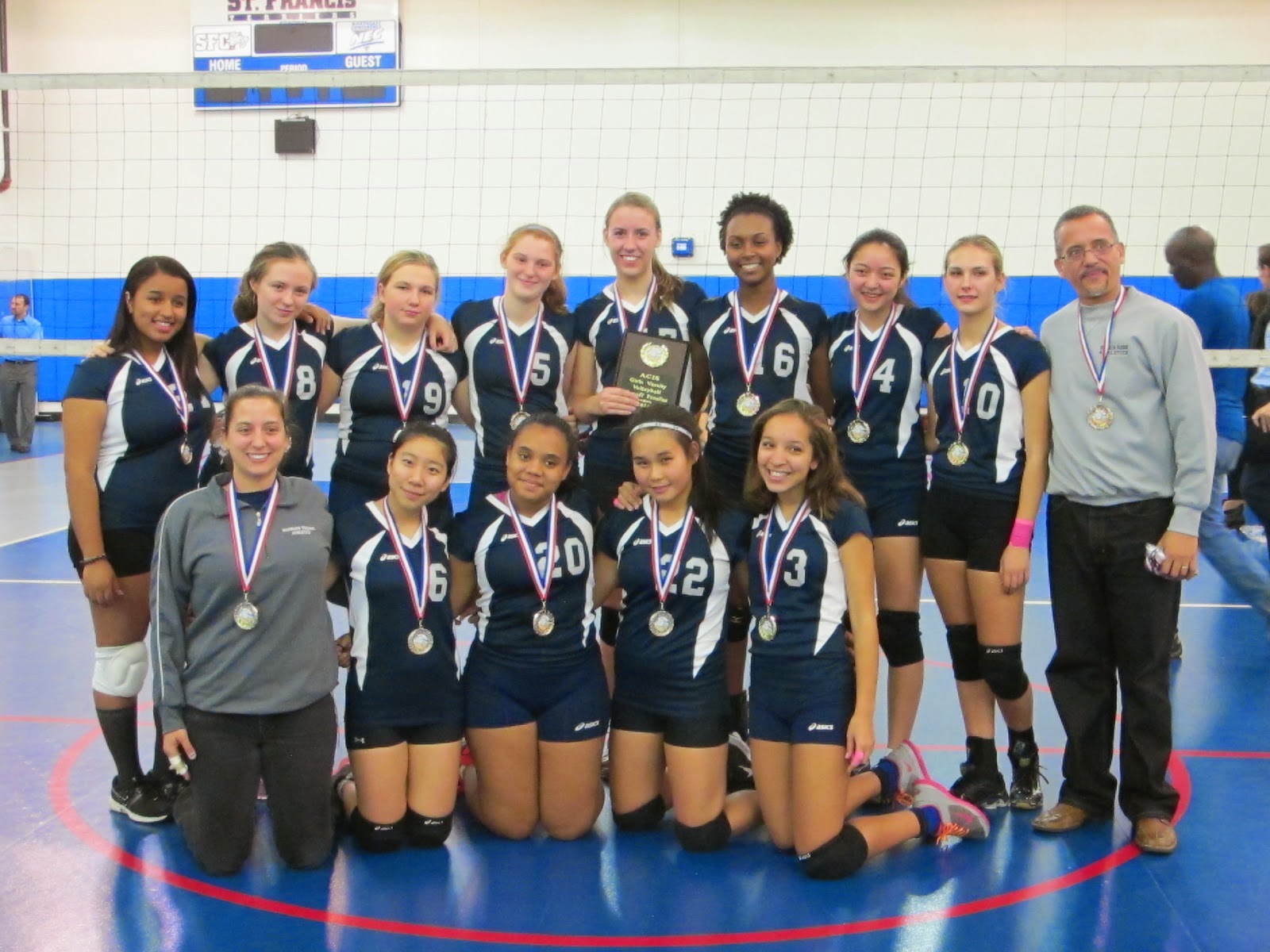 On Monday the BFS Girls Varsity Volleyball Team lost 3-2 (25-23, 25-23, 20-26, 19-25, 7-15) to St. Ann’s in the ACIS Finals at St. Francis College. The girls fought hard, putting pressure on St Ann’s, to take the first 2 sets, behind strong serving and strong offense from the middle.  St Ann’s recovered, showed great poise, and ended up winning the next 3 sets in a row.  Even though we got 2nd place, the girls have shown great improvement since the first time we faced them earlier in the season.  Everyone is more confident, consistent, and more aggressive when playing the ball.  This match was dictated by whoever gained early momentum.  It was a great experience ahead of our next challenge, the NYSAIS tournament tomorrow versus Spence at Convent Sacred Heart at 5:00pm.  Blue Pride Runs Deep, Friends Forever!! 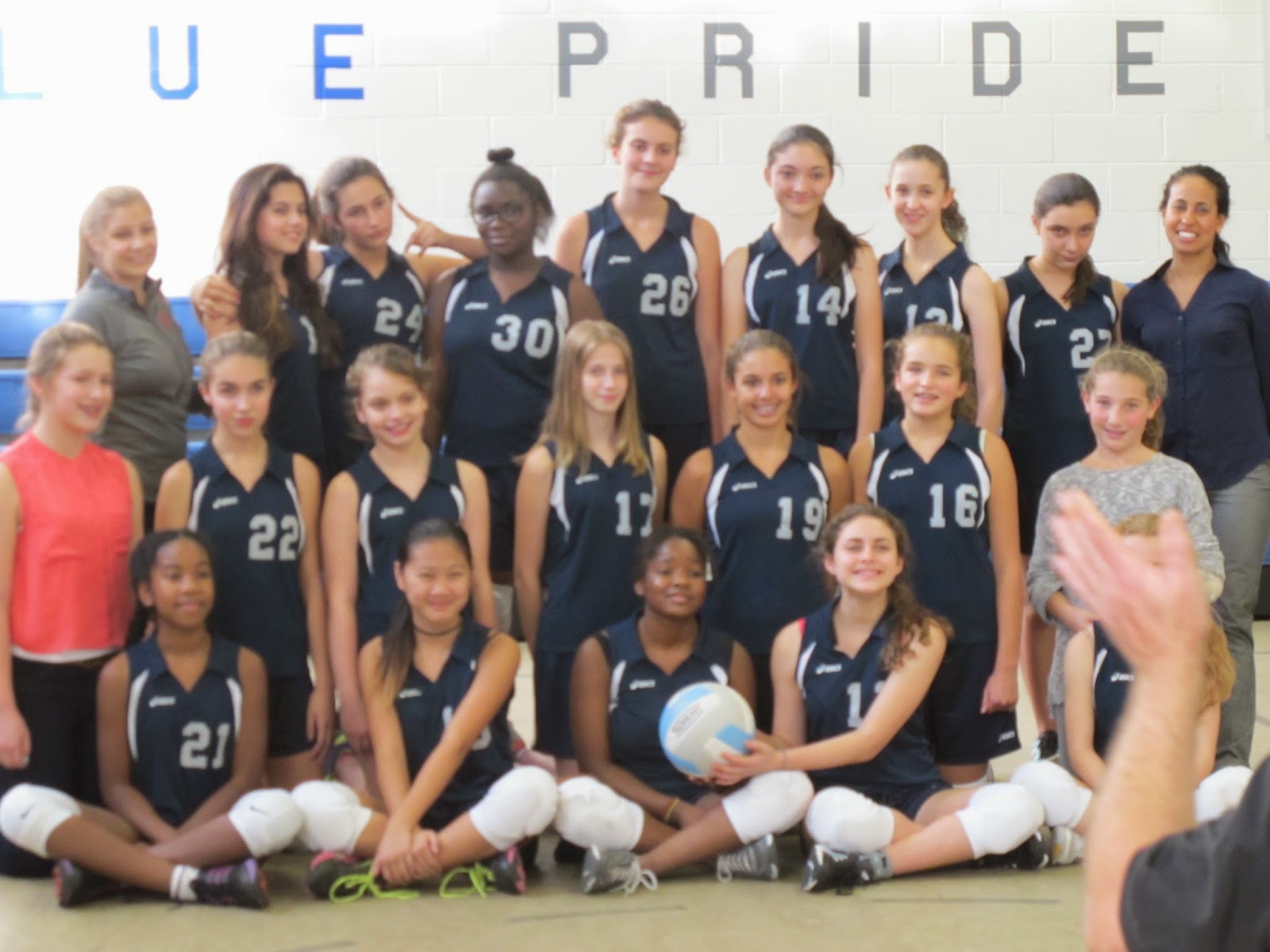 The BFS MS Girls Volleyball Team defeated Friends Seminary 2-0 (25-15, 25-15) in the upper gym. The team as a whole did a great job not only serving but defending the serve as well. Milla S. got her serve back and made beautiful serves, 6 of them were consecutive and the girls cheered her on with their ACE cheer. Spirits were high when Lily N-B made her first serve during a game. the team played a third match against Friends Seminary for fun and the 7th graders have proven how focused and dedicated they are to the program. See you next year!! Blue Pride!! 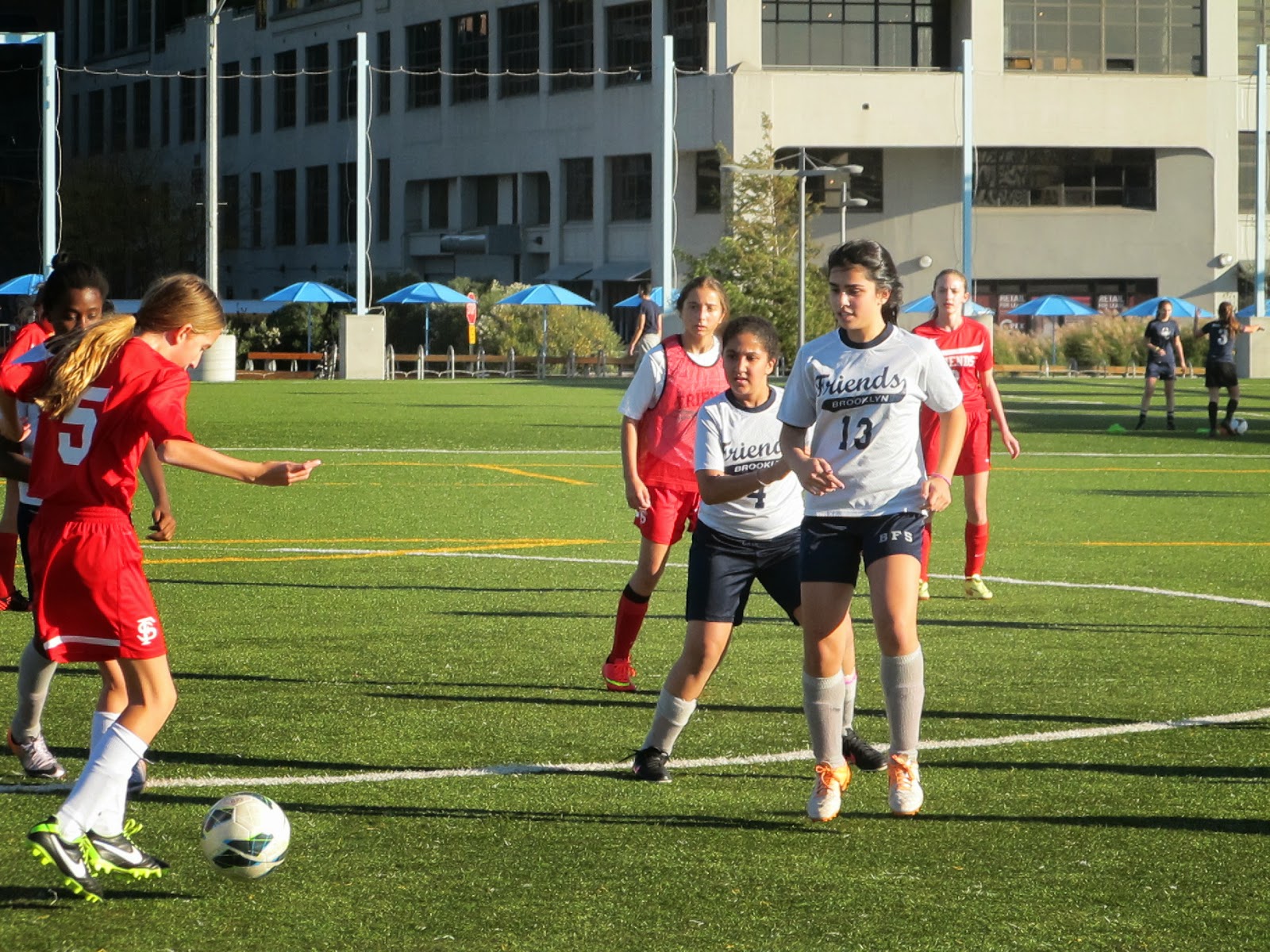 The BFS MS Girls Soccer Team defeated Friends Seminary School 2-1 at Brooklyn Bridge Park. After a sluggish start BFS found themselves down 1-0 early in the game. However, after a few changes, one which included changing the goalie to Nora S. BFS was able to gain momentum and offensive control. At the 16th minute mark, 7th grader Willa S. was able to tie the game 1-1, after beating her defender and sticking an impressive kick into the goal. The second half was played evenly as both teams struggled to score. That was until the 58th minute mark when Willa S. was able to score her second goal of the game right before the closing whistle and secured the 2-1 win for BFS. Way to go team. Overall, it was a great performance, with a very impressive, dramatic, and exciting win!! Blue Pride!!

The BFS MS Boys Soccer Team defeated Friends Seminary 3-2 at Brooklyn Bridge Park. The team turned the game around late to once agin pick up the victory.  The game was very closely fought as both teams played some excellent passing soccer, with chances being created at both ends.  BFS goalie Patrick D. made some excellent saves throughout the game to keep the score level.  BFS created some chances of their own, and Rafe F. was unlucky to see his shot drift wide of the far post.  BFS found the breakthrough just before halftime.  A long ball forward from Finn S. was flicked on by Miles J-P. into the path of Miles B. who ran clear of the defense and finished calmly to give BFS a halftime lead.  Friends Seminary, with a point to prove, struck back moments into the second half to level the score.  15 minutes later, they were 2-1 up after BFS failed to deal with an in-swinging corner.  However, just when it looked like BFS were out of ideas, they somehow managed to turn the game on its head.  They quickly changed from defense to attack, and Miles B. repaid Miles J-P. for his earlier assist by setting him up to score from a narrow angle.  5 minutes from the end, Gabe D. picked up a clearance on the the edge of the Friends Seminary penalty area and curled in a perfect long range shot to hand BFS a dramatic victory.  BFS defended well in the final minutes to ensure another excellent win.  Way to go team.  Blue Pride!! 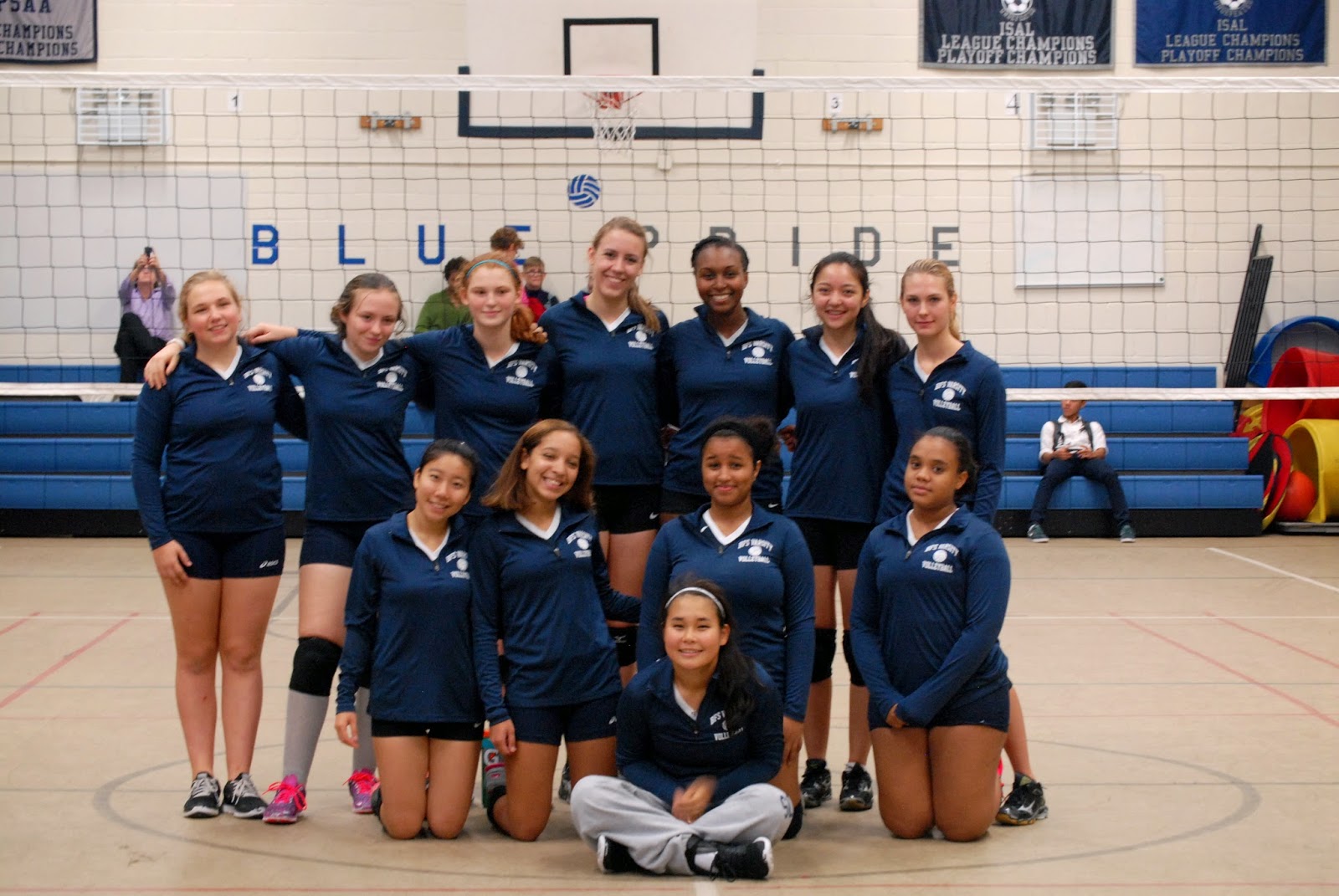 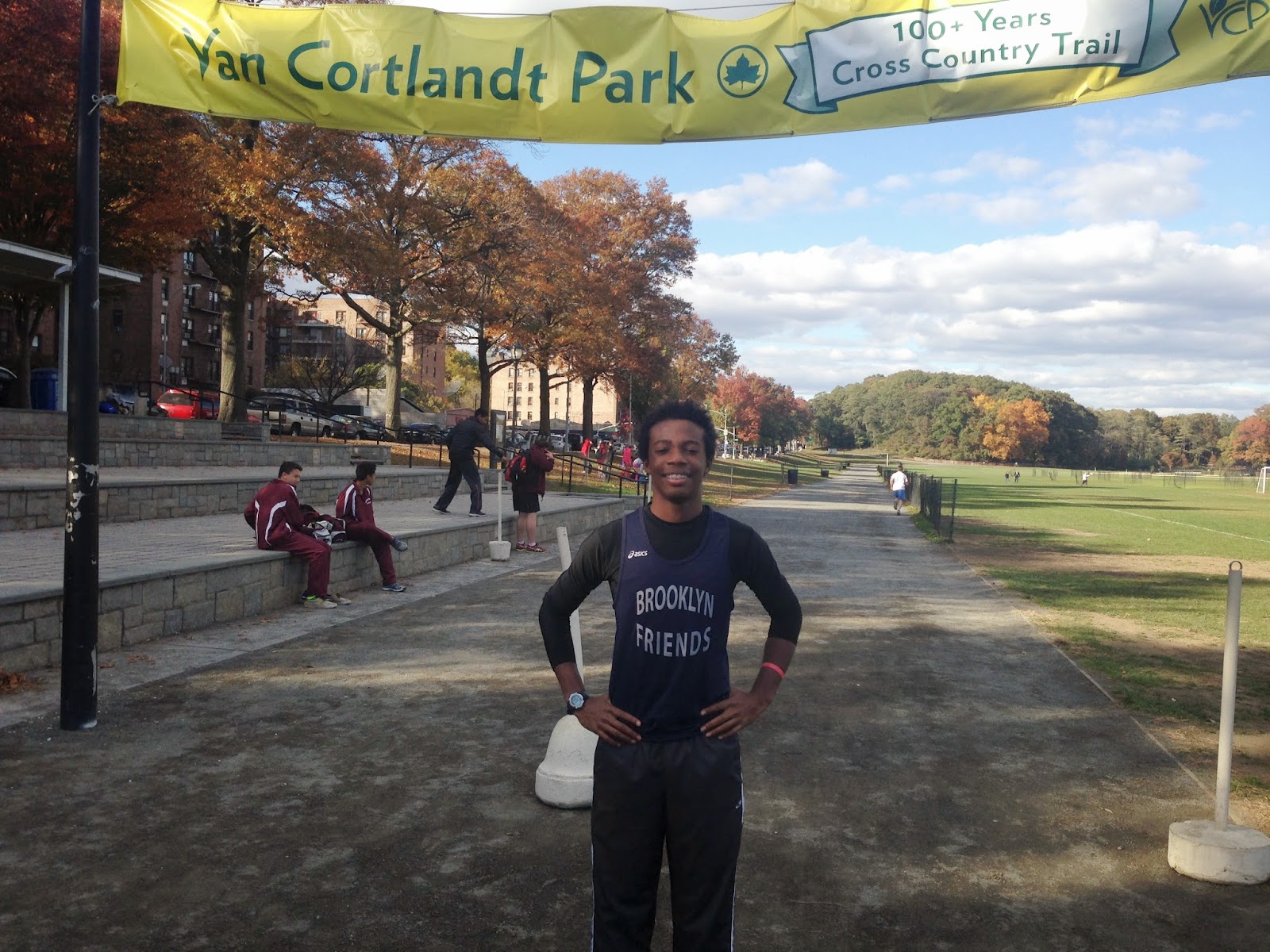 On Thursday the BFS Cross Country Team headed up to participate in the Churchill Invitational.  Mile N. ran a time of 21:34 good for 9th place out of 20 total runners. Miles had a great time at the race. He took the BFS Fall Athletics Program to the finish line. Blue Pride!!

See you next Season….Blue Pride!!
« Power Love Education and Justice (PLEJ) for Liberation
One Book, One BFS: The Spirit Catches You and Then You Fall Down »