On Wednesday the BFS Girls Varsity Softball
team defeated Martin Luther 15-6 at Van Voorhies Field.  It was a great win to start the season.  BFS re-enters the ACIS Softball League in impressive fashion.  The team has not competed in the ACIS in a long time.  What a great group of girls we have on this years squad.  The team has been growing the past three years and everyone has really developed and contributed to the teams overall success.  This season we have five seniors, 9 juniors, 5 sophomores, 4 freshmen, and two 8th graders who went through the selection classification process.  The weather looks liek it has finally turned the corner and the sun came out as the girls played one of the best overall games in the past three years.  It started with great pitching, as ace sophomore Taty R. took the mound and pitched a masterful a game.  She threw mostly strikes in the complete game victory.  And then there was tremendous defense.  BFS made almost all the plays they needed to pick up the victory.  Too many great plays to name, incudeling a couple nice double plays.  Senior catcher Anna E. played one of her best overall games over the years.  Senior shortstop Julia G. was a vacuum who threw perfect strike to our senior first base women Chloe B.  Great pitching, even better defense, as well as some wonderful hitting.  BFS looked cool and calm at the plate as they only swung at good pitches and took other pitcher to get on base with timely walks.  Everyone contributed on offense whether it was with base on balls, making contact, or drilling an impressive hit.  Chloe led the way with 4 RBI’s.  Every starter got on base with at least one hit or a walk.  Seven starters scored at least one run a piece (6 starters each scored two runs).  BFS has plenty of players on this years team and we always do our best to get everyone into the game.  The team is back in action today at Van Voorhies Park in another ACIS League contest.  The sun is out.  Play Ball. 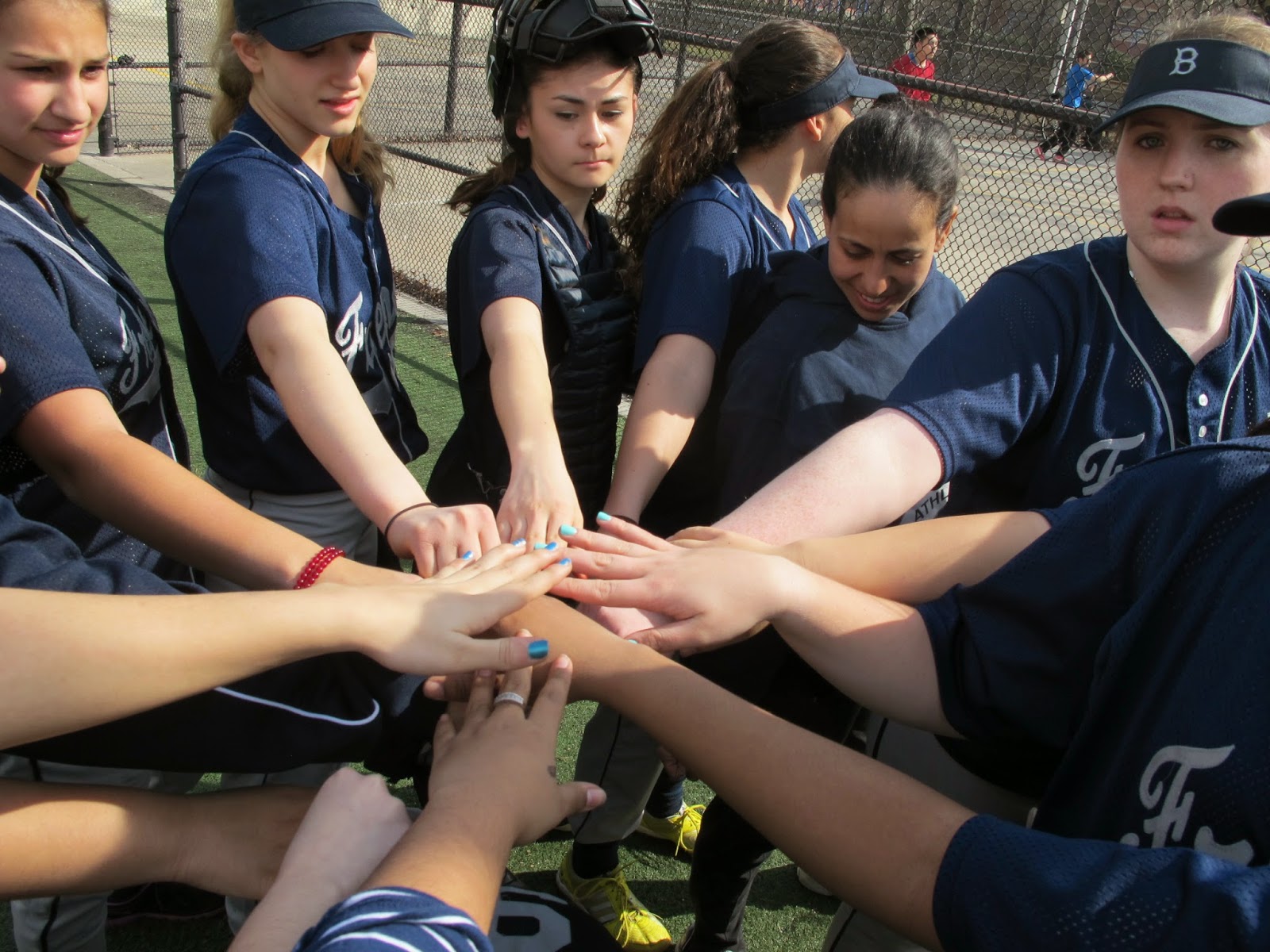 On Thursday the BFS Girls Varsity Softball team once again took the field.  They had some trouble getting their though.  The sun was out and the team was excited to get back to action as they left the school headed for the team bus.  The bus was nowhere to be found and after waiting while placing numerous phone calls we were told it broke down.  Blue Pride was on our side….suddenly a sparkling blue van pulled up with our driver and we were swept magically to the field.  Need I say more.  Upon arriving late we didn’t have much time to warm up as our opponent was already at the field and the umpires were ready to go.  We got organized as quickly as we could and were hoping for the best.  A little shorthanded due to a trip and some normal student-athlete conflicts we took to the field for our second game in as many days.  The sun was out but our team was lacking in the energy department.  Something wasn’t right.  We held our own and played through this lack of energy and sense of urgency against a very skilled opponent.  Their pitcher and team got better and better as the game went on.  We made a few mistakes but did a great job hanging in.  We found ourselves down 2-0, then 3-0, then 4-0 going into the bottom of the fourth inning.  Sophomore Taty R. was doing her job on the mound throwing strikes and the defense for the most part was making all the plays all the while with little to no energy or intensity.  We huddled up a few times during the game to go over strategy and to try to light a spark from within our own very talented group of players.  We said if we could just get on the board we could get back into the game as our opponent had become very comfortable.  A hit, a walk, and a run scored BFS found themselves down 4-1 after four innings of play.   Maybe the tide had changed.  The BFS coach forgot to put on his lucky hat with all the commotion that took place earlier in the afternoon, but when things calmed down he was able to regroup and locate his hat during the 4th inning.  BFS gave that run right back in the top of the 5th and BFS went down in order in the bottom half of that inning.  Down 5-1 going into the 6th we new we still had a chance.  Taty focused in and threw 10 total pitches while securing the three outs in the top of the 6th.  BFS got a lead off hit from junior lead off hitter Maret S-M, and Taty R. helped herself following the first hit with an RBI hit of her own.  Senior Julia G. (RBI single) and junior Julia B. each picked ups hits and BFS found themselves down only two with runners on second and third and less than two outs.  The rally stopped there.  BFS was going to have to hope for the best during the final inning of play.  The Berkeley Carroll clean up hitter led off with a smash grounder to second but Maret was there to scoop it up and throw onto first to senior Chloe B. for the very important first out of the inning.  The next two hitters singled to the outfield and BFS found themselves in trouble with only one out, runners on second and third, and only one out.  Taty kept throwing strikes and the next hitter lined it to third where Julia B. caught it and stepped on third for the inning ending double play.  BFS huddled up on the sidelines.  They had been in the situation before a couple times last year and those games ended with walk off victories….could they do it again?  The team hung in and hung as they kept their hopes alive. BFS made two changes to their line up during the 5th inning and now those two players were coming to the plate.  Sophomore Naya C. calmly stepped into the batters box and worked out a lead off walk, so important.  Then sophomore Sarah G. also stepped in and looked calm as can be, she hit a ball down the third base line and beat it out for an infield single.  The runners moved over on a wild pitch.  The stage was now set for the top of the BFS order.  Maret stroked one to shortstop and Sarah G. tried to advance, but there was a bang, bang play at third and she was called out.  One out, one on (the tying run) and the score now 5-4 in favor of our opponent.  Taty, our ace on the mound stepped in, while slugger Julia G. was on deck, and Taty picked out the first one she liked and hit a screamer just over the out stretched arm of the third base woman who caught everything else during the game.  The ball rolled and rolled and Taty ran and ran, Maret scored to tie things up, everyone was just waiting to see where Taty would end up, coach thought about holding her at third but as our opponents skilled shortstop caught the cut off BFS decided to send Taty and hope for the best, and the best took place.  Taty beat the throw and calmly walked into the dugout as the coach informed the team we just won a come from behind walk off 2 run homer run.  BFS 6, Berkeley Carroll 5.  Blue Pride Runs Deep, Friends Forever.  Need I say more?  Way to go team!!  Everyone contributed to the victory. 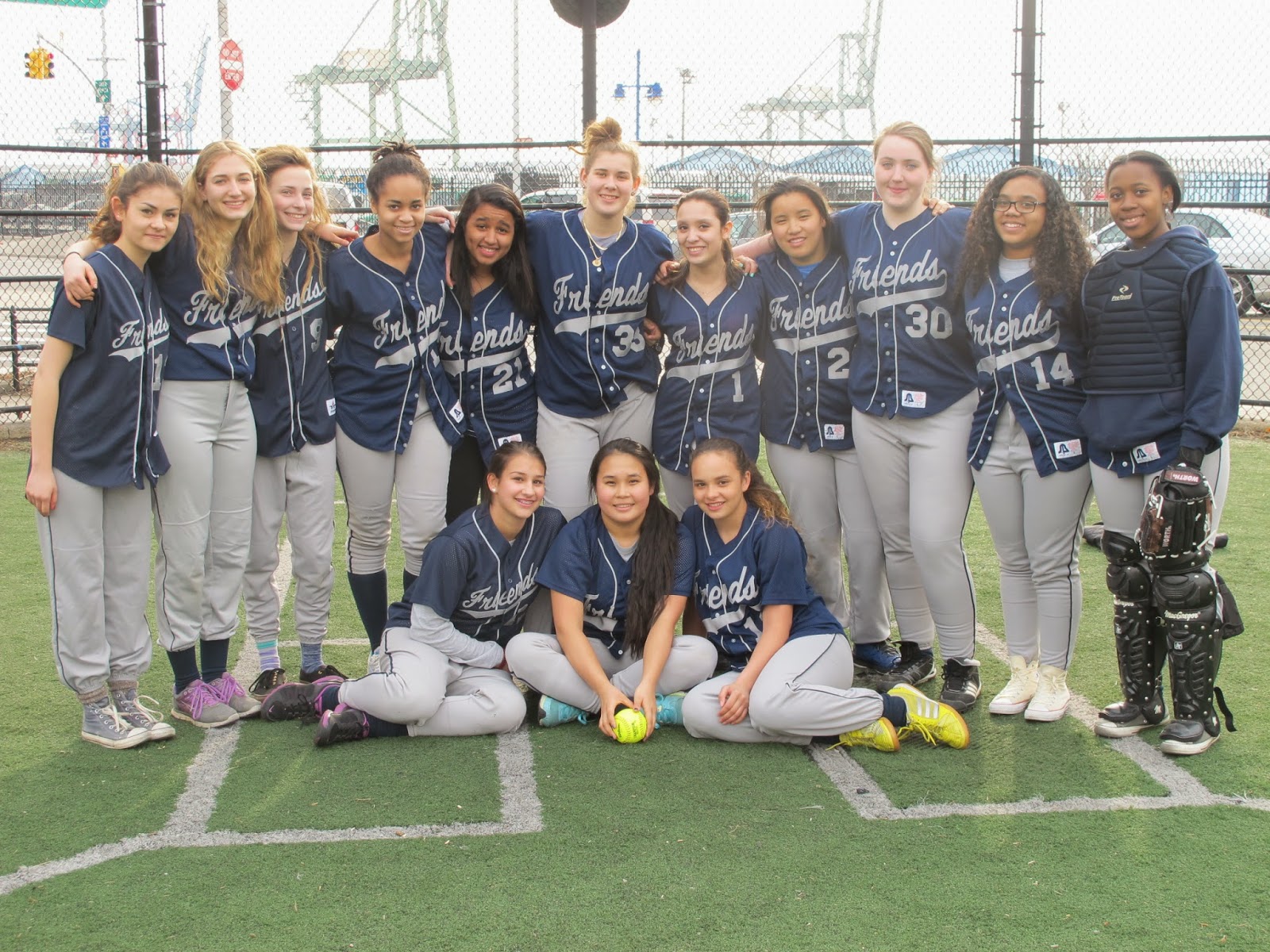 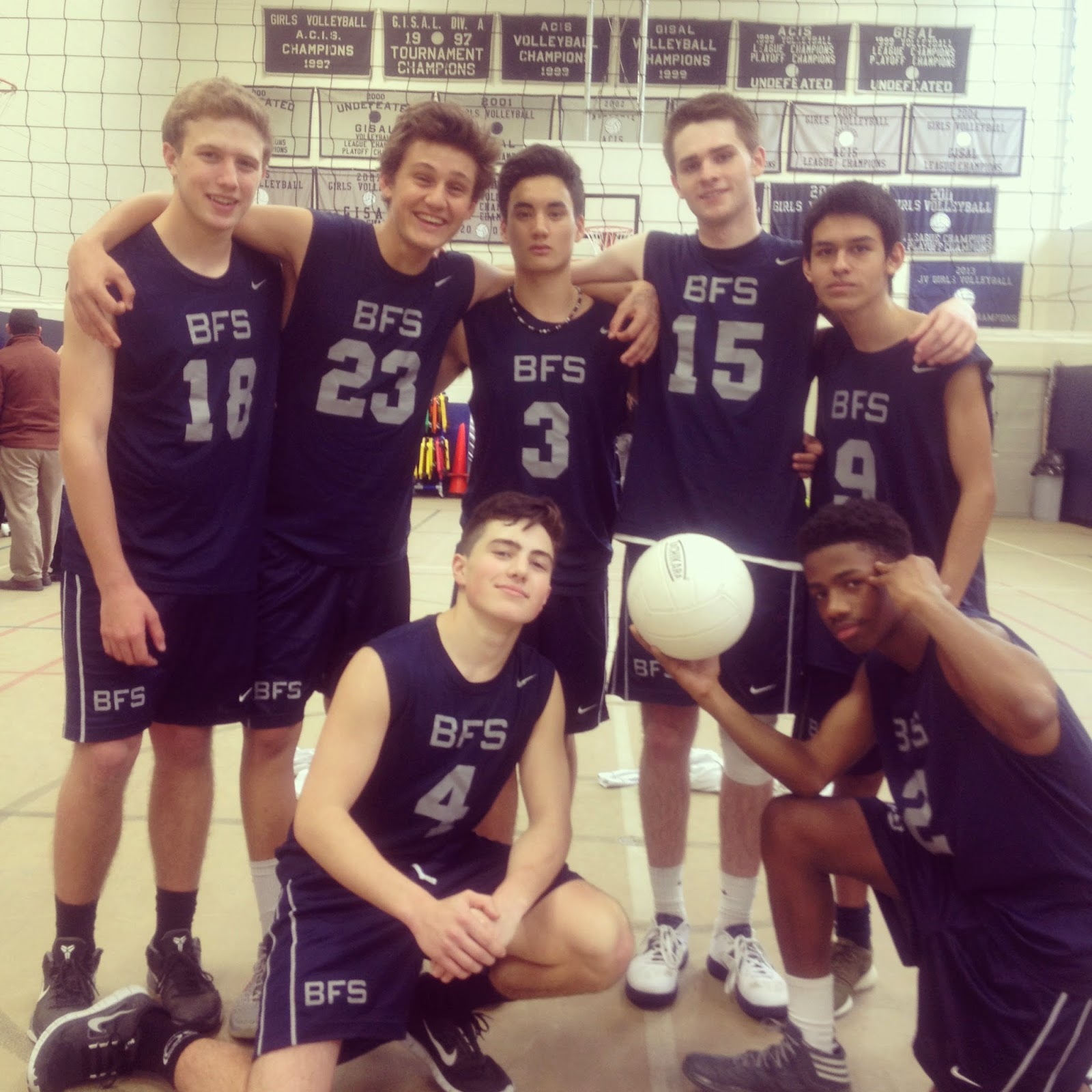 The BFS Boys Varsity Volleyball team defeated Greater NY Academy 3-0 (25-5, 25-12, 25-15) in the upper gym in its first ever league match.  Blue Pride!! The team played very well considering it was their first game of
the season.  Everyone was focused
and determined to see the match through.  The teams practice paid off today.  It was good
way to start the season.  The team will look to continue to practice, work hard, and improve on their our
rotation and system of play.  All 7 players
(Thomas C., Lucas M., Griffin E., Julien B., Quran D., Tyler V., and Juan A.) contributed to the matches
success, either offensively or defensively.  Junior Thomas dominated the offense with 15 kills, 5 aces, and 7
blocks, while fellow junior Griffin set up the pace with 17   assists.  Overall a good start to the season!  Looking forward to the next one….

The BFS US Boys & Girls Varsity Outdoor Track team ran in their first meet of
the season at the St. Ann’s Relays down at Red Hook.  All were excited to leave the snow and cold
of winter behind and run at the track on a beautiful sunny day.  The sprint medley was the first race of the
meet.  The lead off leg of this event is the 200 meters.  Senior Elinor H. quite ably
handled this leg.  She gave the quartet a nice lead on the first exchange as she
handed off to senior Tyler C. who powered through her 100 meter leg with impressive
desire.  Next up was senior Aria C.’s 100 meter leg.  She was undaunted by a three meter deficit as she gobbled up
the St. Ann’s runner in front of her and gave junior Maya K. a four meter lead.
Maya had a challenge on the anchor leg as runners from St. Ann’s and Dwight were
on her heels.  She took them out hard but was not able to hold off their charge
as Brooklyn Friends placed third.  Each runner ran with true heart and desire.
The race was a good start to the season.
Junior Giovanna M. and senior Sophia S. joined Elinor and Aria to
run the 4 x 200m.  Giovanna generally focuses on distance races but she was at
home on her first leg of this sprint race.  She showed her speed and gave Elinor
a two stride lead.  Elinor
increased BFS’ lead another stride for Sophia as a relentless runner from St.
Ann’s shadowed her.  Sophia was caught in about 70 meters on the penultimate
leg but stormed back to regain the lead in another 100 meters and passed the
baton in first at the exchange to Aria.  Victory was in sight and Aria ran like a veteran as she
leaned into the turn and zoom down the straight away for the first place finish.
All the runners performed beyond their expectations given
all had just returned from spring break.  The competitive run of the sprint medley team and the victory for the 4 x 200 team sends the BFS runners into the
rest of the season with confidence and anticipation of some great performances.
This momentum will send everyone flying down the track in their next races.