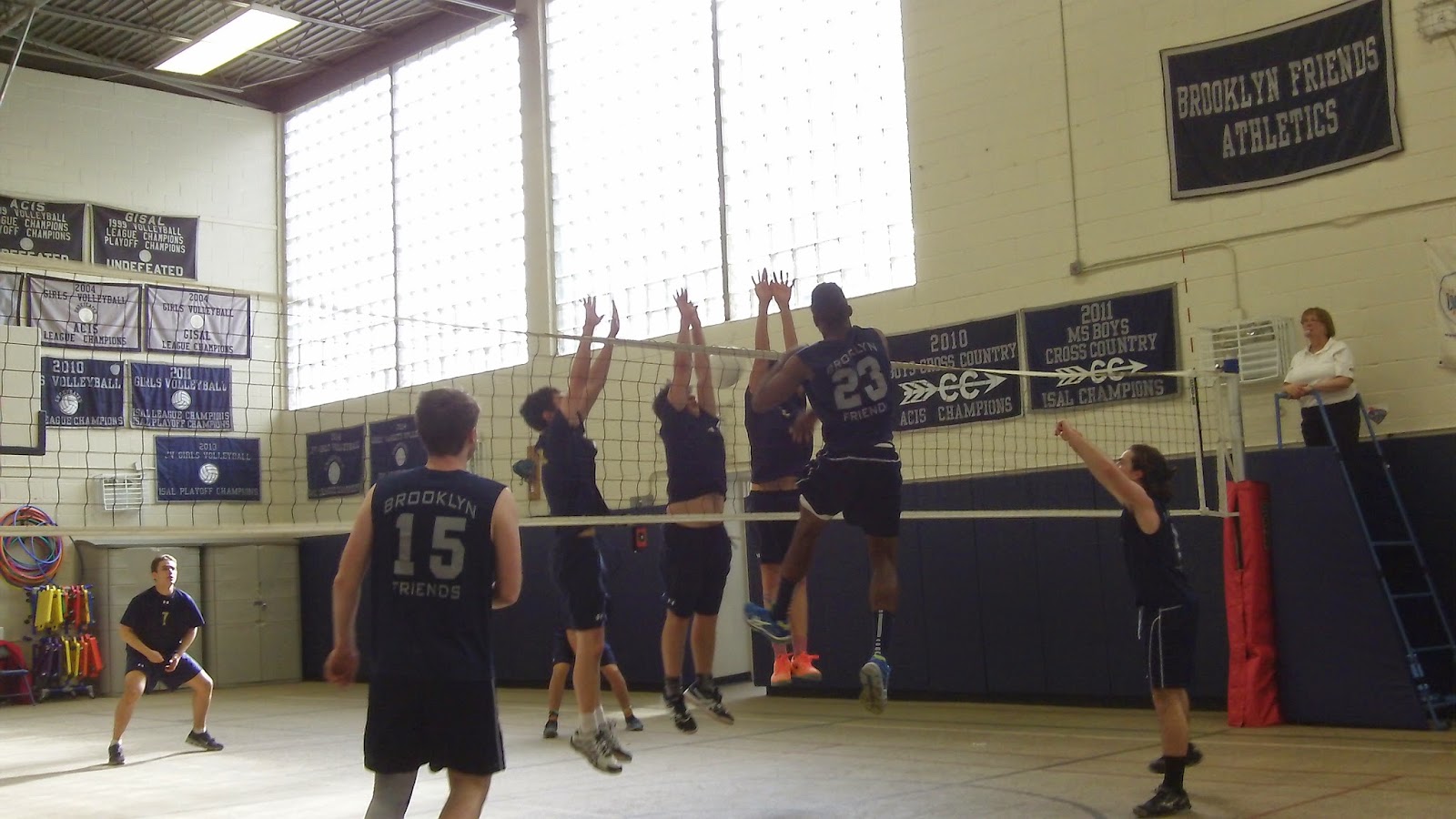 On Tuesday the BFS Boys Varsity Volleyball Team defeated Staten Island Academy 3-0 (25-20, 26-24, 25-15) on the road. The team was challenged by a skilled, hustling, and competitive opponent. BFS struggled with its consistency and with a new rotation since it only had 6 players. The team played together and stayed focused throughout, even when they felt behind. BFS worked hard, kept their composure, and managed to come from behind to defeat SIA in three straight sets. Senior Griffin E. contributed with 27 assists. Fellow senior Thomas C. added 15 kills and 9 aces; Tyler V. had 8 kills, and the rest of the group, Lucas M., Kamal G., and Ernest M. helped out both defensively and offensively to secure the league win. Blue Pride!! 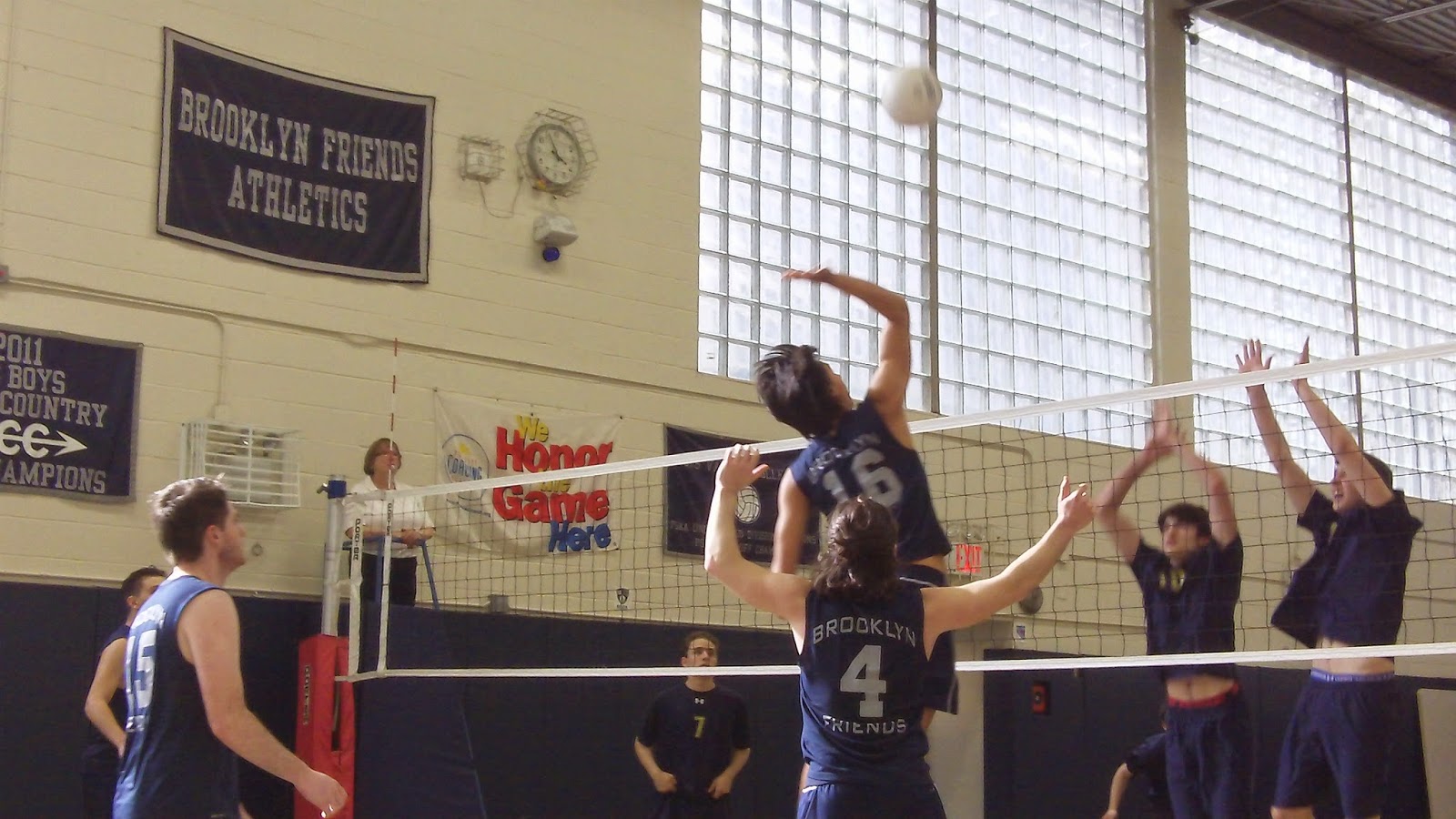 On Wednesday the BFS Boys Varsity Volleyball Team defeated Packer 3-0 (25-21, 25-18, 25-14) in the upper gym. The team played a very competitive match to defeat their opponent. Even though BFS controlled the pace of the match, each set presented a great challenge against a strong opponent. BFS made consistent progress throughout the match, reflected on the improved scores per set. Senior Thomas C. led the offense with 19 kills and 5 aces. Fellow senior Griffin E. continues improving his decision making skills as a setter, accumulating 30 assists. Chris B. added 3 blocks; Tyler V., Philip C., and Lucas M. combined for 12 kills. Kamal G. and Ernest M. continued showing a better understanding of the game helping out on defense and offense. Overall a well-played match against a highly competitive team! Blue Pride!!

The BFS Girls Varsity Softball Team picked up their first win of the season as they defeated BWL 13-3 at Van Voorhies Field. Its was a chilly spring day at the field. The team got off to a good start getting out of some minor trouble in the top of the first inning as senior third base woman Julia B. snagged a hard liner and turned the inning ending double play (a little help from your friends).

BFS picked up two runs during the bottom half of the inning as junior pitcher Taty R. started things off with a hit and helped herself as she scored, along with senior Julia B. Taty once again was able to maneuver out of a slight jam during the top of the second inning as she struck out the final two hitter. BFS scored four more runs in the bottom half of the inning as freshman Rosemary D-C picked up her first career hit, followed by senior Maret S-M hit. Taty then calmly drove them home with a sharp double down the line. Taty continued her dominance on the hill as she shut down BWL for the third straight inning. BFS picked up two more in the bottom half of the inning as junior Naya C. walked for the second time in the game and senior Greta L. had a hit. BWL picked up their first two runs during the top half of the fourth inning. Their clean up hitter hit a moon shot that just passed the outstretched glove of our center field for a long single to get them started. It was only their second hit of the game.

After giving up the two runs Taty settled back in. BFS started the bottom half of the inning strong with a leadoff walk from senior Julia B., followed by hits from sophomore Ivy L., senior Julia C., and then senior Ariel G. who smacked a two RBI double. The game was well in hand at 12-2 after 4 innings of play. Even though it was brisk out there BFS’ spirits were high. Taty pitched the fifth inning and gave up one more running while picking up her 5 strikeout. BFS needed one more run to close things out during their time at bat. And that is just what they did. With two outs sophomore Silvely A. got things started out of the three hole with an infield single. Julia B. smashed a liner to short and somehow their shortstop got a glove on the ball and kept it in the infield. It she didn’t knock it down that ball would have most likely traveled all the way to the wall for a game winning home run. With Ivy L. at the plate and the chance to close things out for BFS with a hit their pitcher through a wild pitch and Silvely raced home for the win. Taty picked up the complete game victory.

Everyone on the team contributed. The team is now 1-0 in ISAL league play. Looking forward to the next one. Blue Pride!!