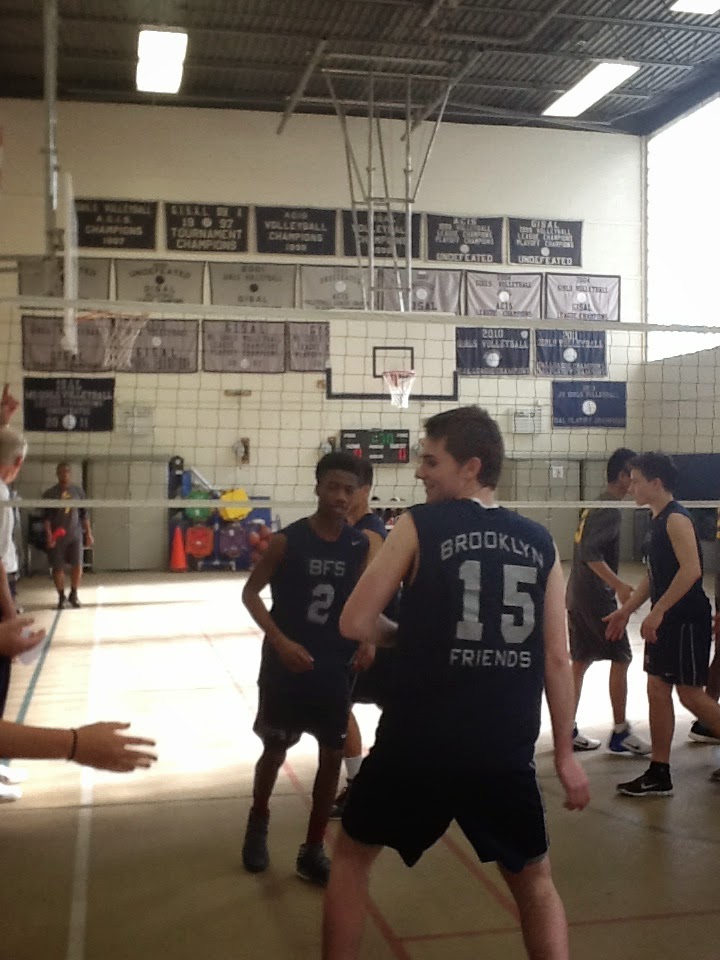 On Monday the BFS Boys Varsity Volleyball team defeated Greater NY Academy 3-0 (25-21, 25-9, 25-12) in the upper gym.  Considering that we had exactly 6 players, the team played a good overall game, ending up with the home victory and keeping the undefeated streak alive.  After a rough start, with a first set full of errors, the team settled in and took control of the match during the 2nd and 3rd sets.  Juan A. did a good job filling in for Lucas M.  Quran D. and Tyler V. played very consistently combining for 5 aces and 8 kills.  Thomas C. led the way with 12 kills, 7 aces, and 2 blocks.  Griffin E. continues improving his decision making, accumulating 22 assists.  Today the team was really focused on improving their overall play, while controlling the pace of the game.  Another good team effort!  Blue Pride Runs Deep!! 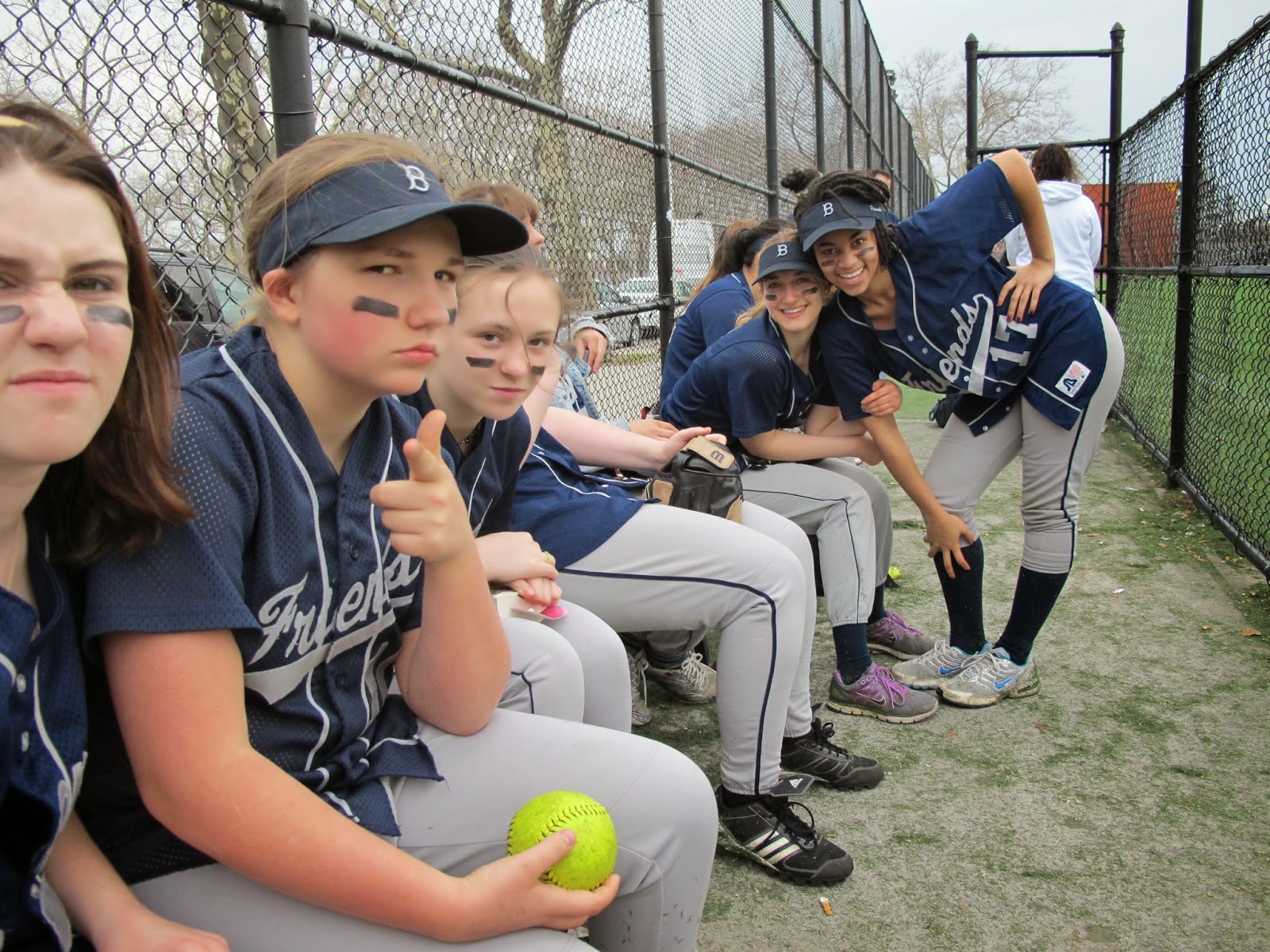 On Tuesday the BFS Girls Varsity Softball team defeated Bay Ridge Prep 13-1 on the road.  BFS traveled to Bay Ridge hoping to get back on the winning track.  The team enjoyed the smooth bus ride and was very excited to play a new field.  As the game started, so did the rain. It drizzled throughout game play.  BFS scored one run in the first inning but stranded the bases loaded as they hit into an inning ending double play.  Coach continued to remind the girls to watch the line drive, but someone forgot, and the team continued to say “Coach you keep saying watch the line drive”.  Our regular pitcher had to stay back to finish an exam so we went with our senior closer Julia G. on the mound to start things off.  She was phenomenal.  She threw 10 pitches during the first inning recording all three putouts.  BFS then jumped out in the top of the second inning as they batted around and plated six runs to give them an early 7-0 lead.  Julia G. gave up two hits to start off the bottom half of the inning, but with a little help from her friends in the field she got out of the inning giving up only one run.  The rains continued to come down softly and BFS continued to hit, score and play solid softball.  BFS found themselves up 10-1 after three innings of play and Julia G. pitched another wonderful inning as she used only 6 total pitches to secure the three outs.  Two more putouts for her and one strike out.  BFS continued to play well and was now up 13-1 while getting all 18 players into today’s game.  The ace of the staff, sophomore Taty R. showed up and pitched the fourth inning.  BFS was up and about to close things out when with two outs Taty walked BRP’s number three hitter and then BRP’s best player, their shortstop who was batting cleanup stepped to the plate.  If she managed to get a home run or at some point scored during the inning, the game would continue, if not the game would be over.  She drove the second pitch to left field where our eighth grader Lucy S. was waiting calmly, Lucy got under the high fly ball and squeezed it for the third out.  Blue Pride!!  back to their winning ways.  Another league game tomorrow.  See you at the field. 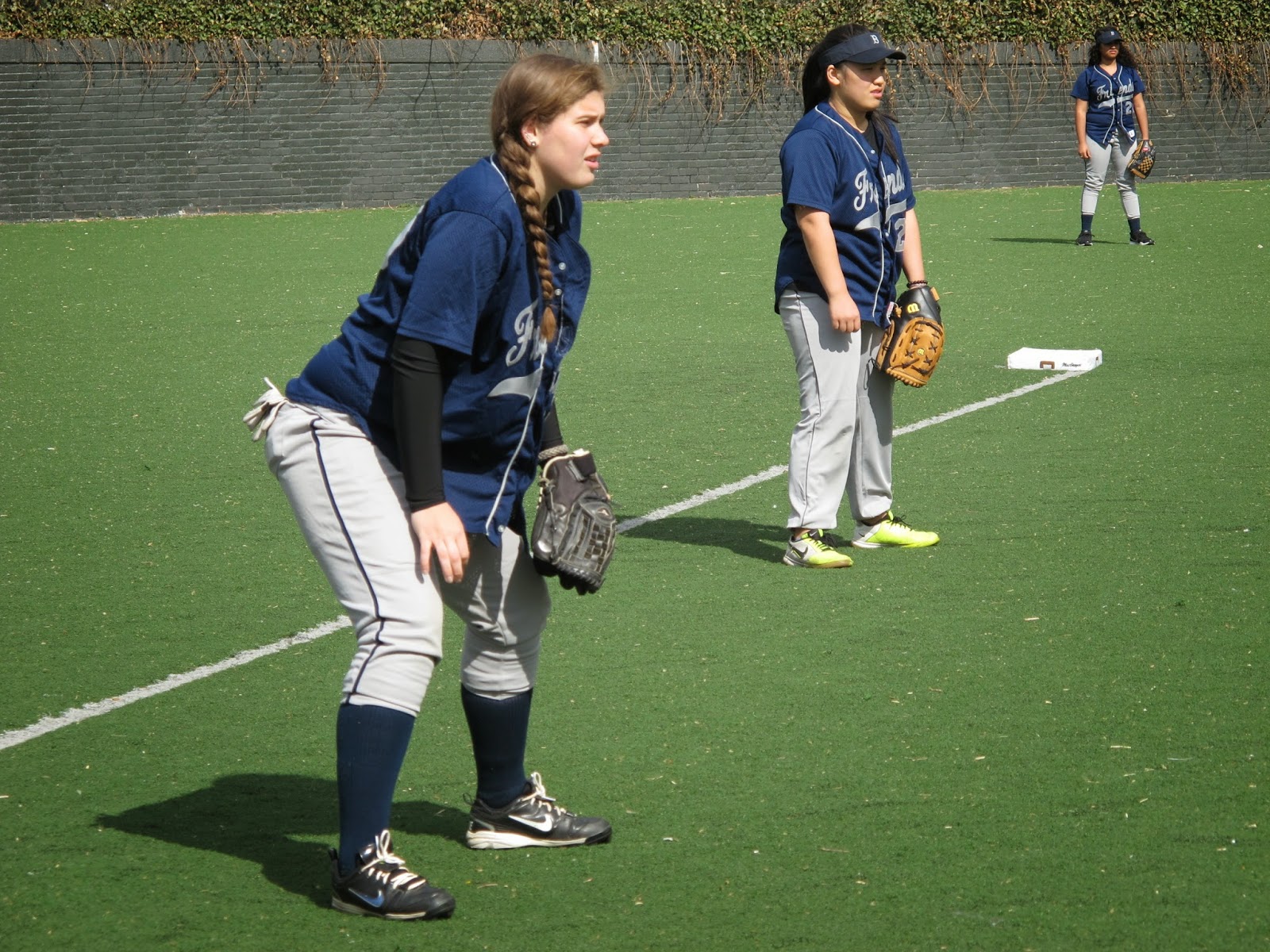 On Wednesday the BFS Girls Varsity Softball team defeated Churchill 16-3 at Van Voorhies Field.  The team picked up its second ISAL League win in as many days.  The clouds rolled in and the wind picked up.  BFS started slow but finished strong.  BFS gave up three early runs with sophomore Taty R. on the mound.  The team answered back with four runs of their own during the bottom half of the first inning.  BFS settled in and the pitchers pitched, the defenders defended, and the bats were alive.  BFS didn’t not give a run after the first inning as Taty and Julia G. shot down their opponent collecting 9 strikeouts combined along the way.  Senior pitcher Julia G. struck out the side during the top of the fourth inning.  After being held scoreless in the bottom of the second inning, BFS scored three runs in the third, five runs in the fourth, and four more runs during the fifth and final inning.  The offensive charge was led by Julia G. in the three whole who went 4 for 4 with a double and her first home run of the season.  She also scored four runs and had 2 RBI’s. Junior clean up hitter Julia B. walked twice and picked up two hits, while scoring four times and driving in two for BFS.  Five hitter senior Chloe B. picked up three hits and two RBI’s, while scoring three runs.  Senior Anna E. smoked a RBI triple in the third inning.  Everyone contributed to the teams victory.  Off day tomorrow, then back to practice on Monday and Tuesday before taking the field again next week for two more important games.  Blue Pride!!

The BFS Boys & Girls Varsity Track team participated in an ISAL Meet at the Red Hook Track.  Many of the runners
toed the line for the first races of their competitive track careers.  It was,
subsequently, a day of new challenges and exploration for the team.  Senior Sophia S. began the team’s day with a strong effort in
the 400M. Normally a short sprinter, Sophia attacked the full lap race with
confidence yet a little uncertainly.  She found the race challenging but
manageable.  The ideas of pace and strategy discussed in practice were
crystallized. All in all, Sophia saw a payoff from her hard work in practice
and room for additional improvement.  Junior Jacob I., junior Maya K., senior Elinor H., and junior Giovanna M. ran the 800M race.  Elinor found a rhythm in her race and finished well. Maya,
Giovanna, and Jacob all agreed the 800M is the hardest race they have run. The
athletes found the races demand of strength and speed daunting.  The 800M is the
one race where almost its entire duration is shear pain. The athletes met this
challenge and now have a comprehension of how to handle the tests the 800M offer.  The next time they take on the race
they will be prepared.  The final group of runners took on the 100M.  The race was
the first competition for senior Tyler C., sophomore Grace M., senior Aria Cato, senior Sophie
A., freshmen Naomi M. and Alexia S.  Each approached the race with
enthusiasm.  They knew the pain their teammates endured in the 800M was not in
store for them.  On the other hand, they all learned a lot transpires for a race
of less than fifteen seconds.  The nuances of running became apparent for the
sprinters through their competition in the 100M.  The race gave rationale to all
the drills, stretching, and running the athletes experienced in practice.  Now
with the connections made, further improvements will follow. 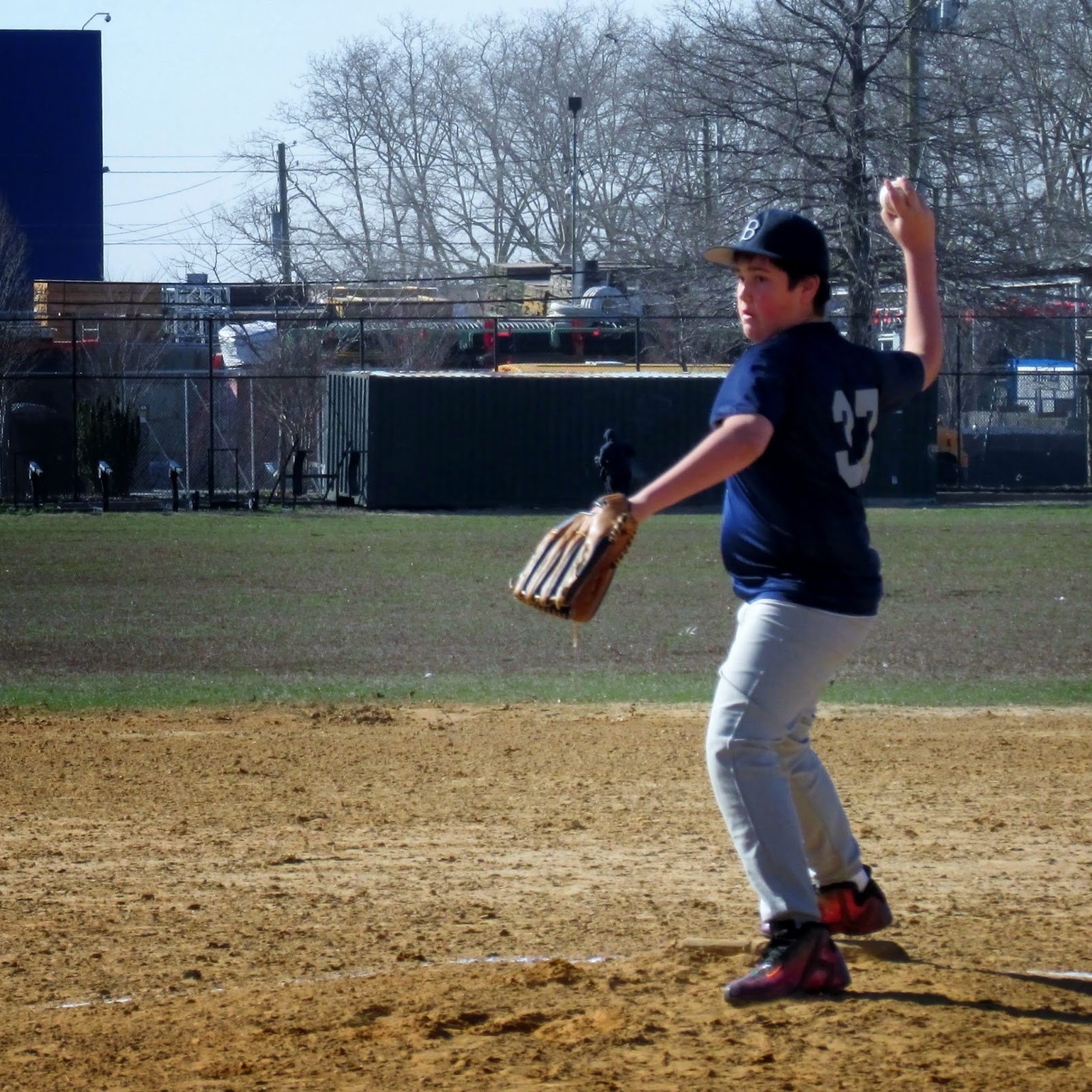 On Thursday the BFS MS Boys Baseball team defeated UNIS 6-5 in dramatic fashion.  The team notched it’s first victory against UNIS in Red Hook.  The game was highlighted by the pitching of eighth grader Jackson W. who recorded 8 strikeouts and helped his cause at the plate with a 2-run triple.  Timely hitting and discipline at the plate led to every BFS player reaching base.  Congrats to Jackson, Emmanuel B-S, Jabulani C., Patrick D., Jordan B., Luca J., and Miles J-P.  Thanks to sixth grader Gabriel D. for  taking photos.  Blue Pride! 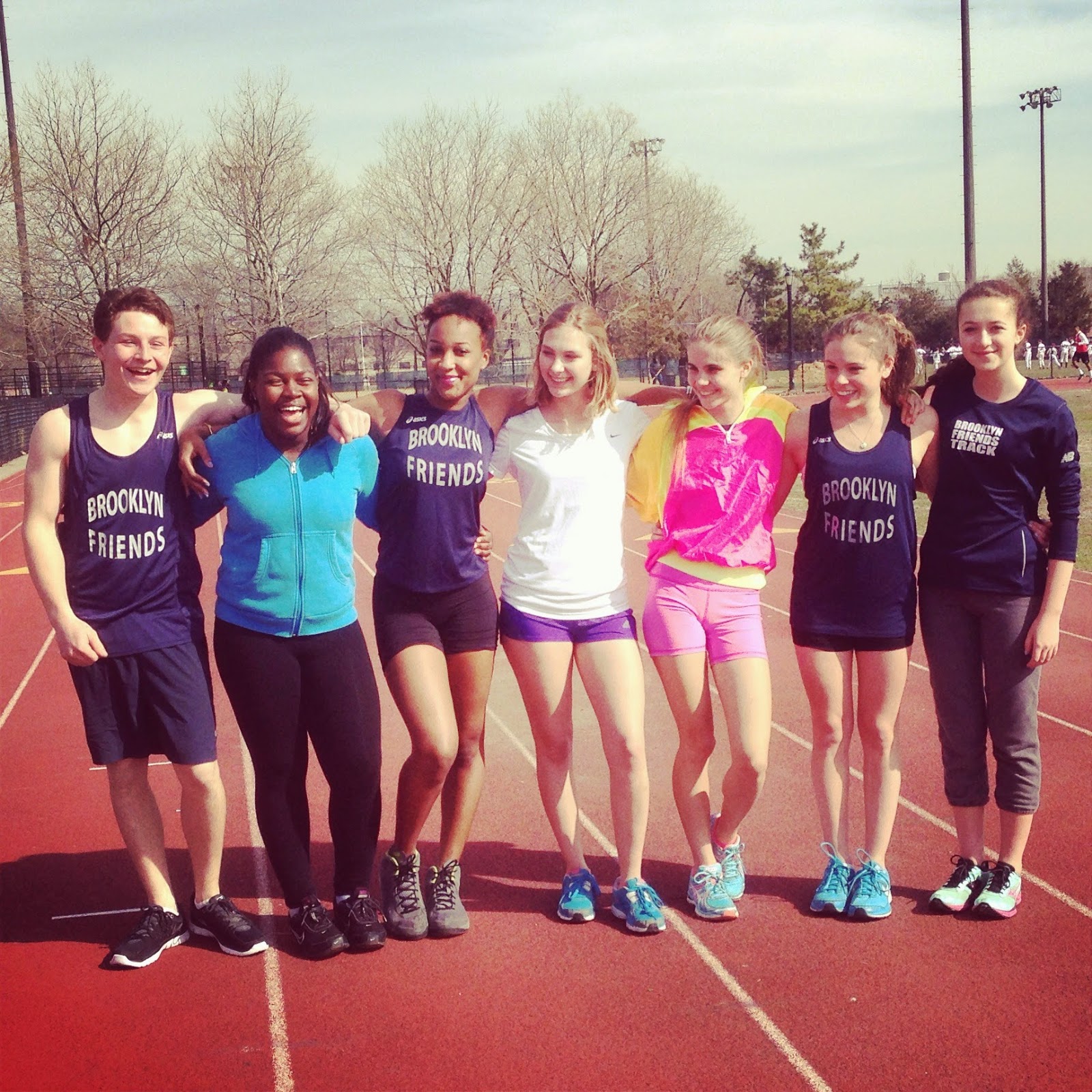 The BFS Boys & Girls Varsity Track team participated in an ACIS Meet at the Red Hook Track.  The team participated in back to back competitions at Red Hook. Jacob I. ran the mile, he equaled his best time from last season which bodes well for the rest of his races this season.  Elinor H. ran the 400M.  In spite of a sore knee, she finished strongly.  Each race for the athletes is a building block for the races in the future. They all established a tone for good results ahead.  Naomi M. and Alexia S. ran the 100M.  They each had a chance to work on their starts which helped them improve their performances from the previous day.  They are becoming season veterans and will make a strong mark on the competition as the season continues. 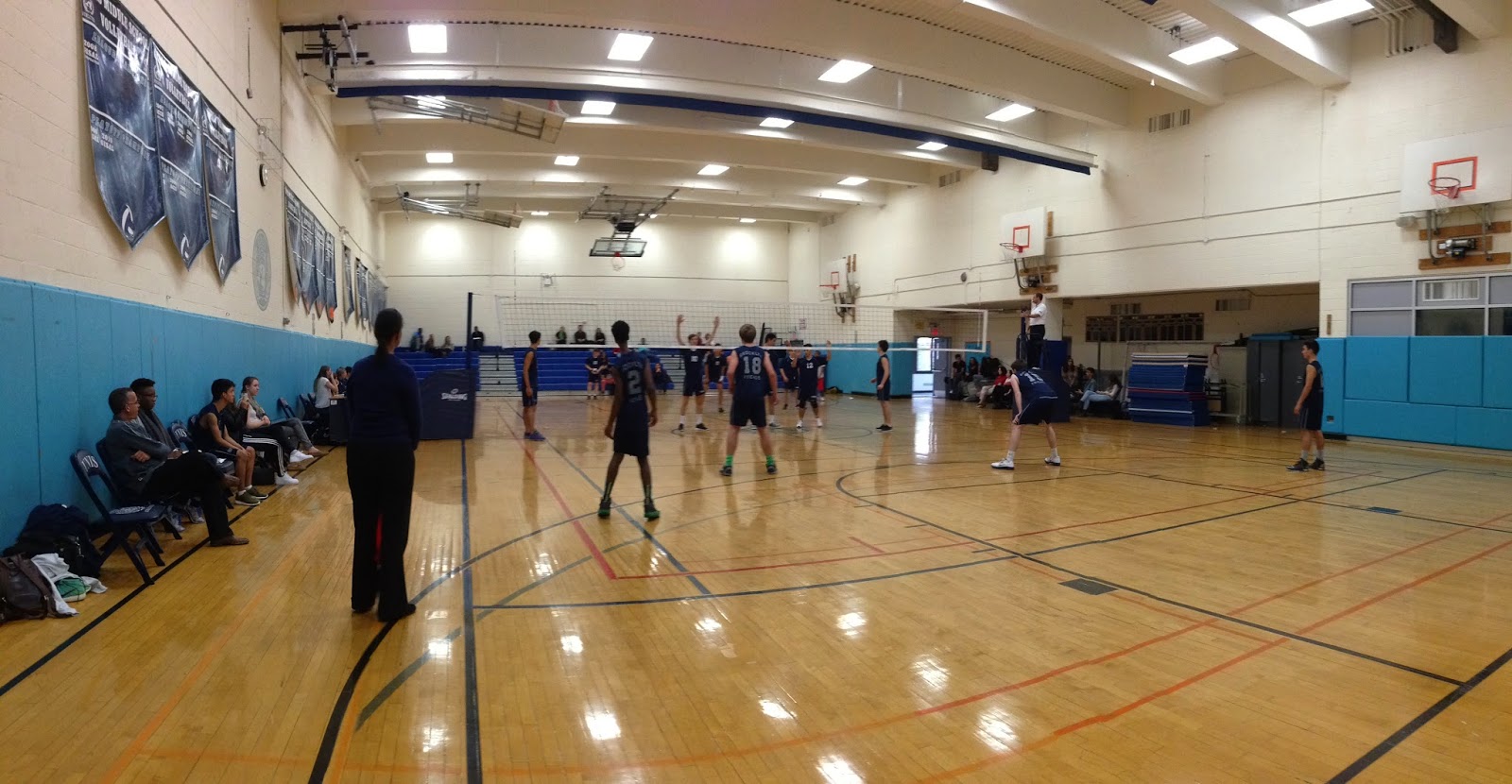 On Friday the BFS Boys Varsity Volleyball team defeated UNIS 3-0 (25-23, 25-15, 25-15) on the road.  The team played very inspired and determined to continue improving during its first season in league play.  The first set was very competitive, despite both teams showing some inconsistency at times.  After the team settled down, they took control of the match to win in 3 straight sets.  It was, once again, another great team effort where everyone contributed to the successful outcome against a very competitive team.  Thomas C. led the way offensively, Lucas M. and Philip C. were a blocking force at the net, Quran D. and Tyler V. played very consistently, Juan A. show improved defense, and Griffin E. continued developing his setting skills and abilities.  Overall a well executed team effort!  Blue Pride!!