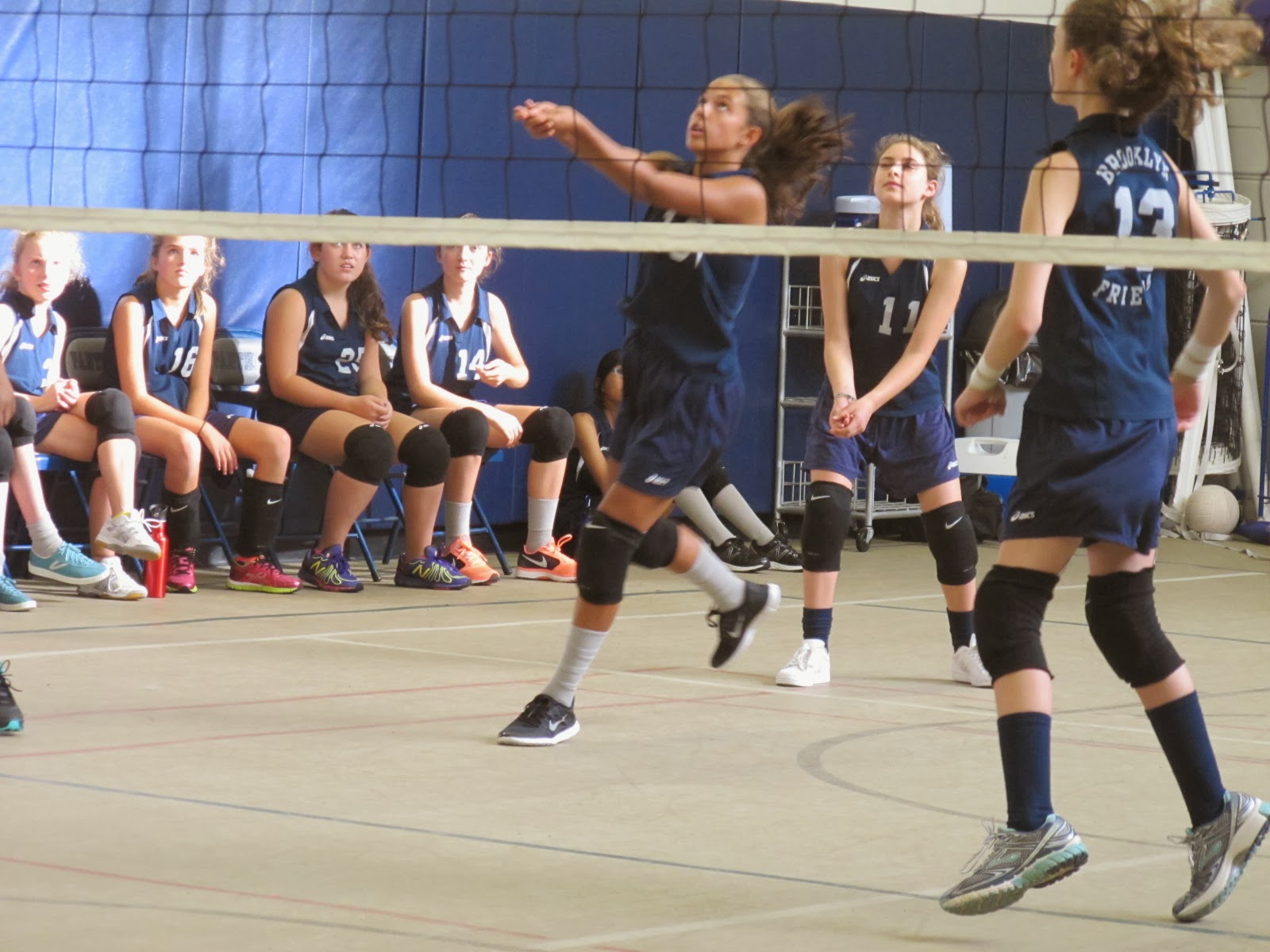 On Monday the BFS MS Girls Volleyball team defeated Churchill in the upper gym 2-0 (25-10, 25-15).  The team continues to improve their communication and serving. New 8th grader Joy F. helped put us in the lead with 6 consecutive serves. Michaela G., also a new 8th grader to the team moved well on the court. The team as a whole is motivated and determined every time they step on the court. The girls are quick learners and understand the game. 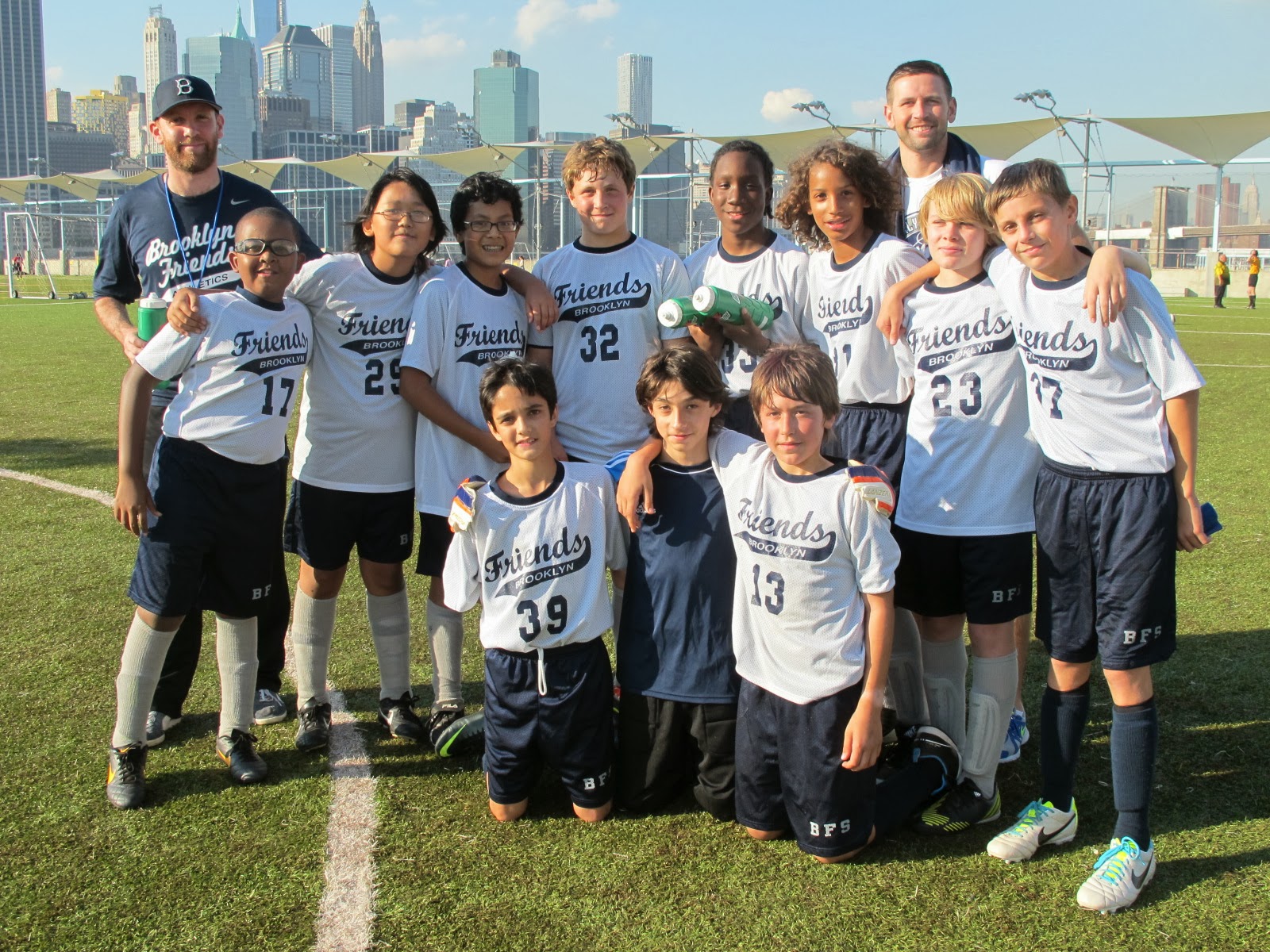 The BFS MS Boys Soccer team secured a second consecutive win with another 7 goal haul, this time against Churchill.  The team took the field for the first ever middle school soccer game at beautiful Brooklyn Bridge Park, what a day for a game.  BFS started brightly and had multiple chances to open the scoring.  Eighth grade strikers Ben B. and Peter H. were causing the Churchill defense problems with their pace and close ball control.  After 5 minutes the pressure finally paid off, and Miles J-P. was on hand to slot the ball low past the goalie.  Ben opened his goal scoring account for the season after capitalizing on a loose ball played out from the Churchill defense.  Ben was very unlucky not to have scored in previous games, and he was clearly happy to put that behind him.  Ben turned from scorer to provider as he set up Peter for his 7th goal of the season.  Emmanuel B-S. was then on hand to steer a Peter pass over the line by the slightest of margins, before Ben capped off a wonderful half of soccer with his second goal of the game.  The halftime score of 5-0 was very well deserved, and BFS started the second half with the intention of not losing their concentration.  Miles doubled his goal tally for the game by scoring from close range and Kwesi S. got a well deserved goal after Emmanuel put him through on goal.  BFS continued to work hard and pass the ball around with confidence and accuracy.  When called into action, goalie Patrick D. made several fine saves.  Tenzin C., Luca J., Owen B. and Jabulani C. also turned in fine defensive displays in the second half.  Chris K.  controlled the midfield for long periods of time, and overall it was an outstanding team display by BFS.  Blue Pride!! 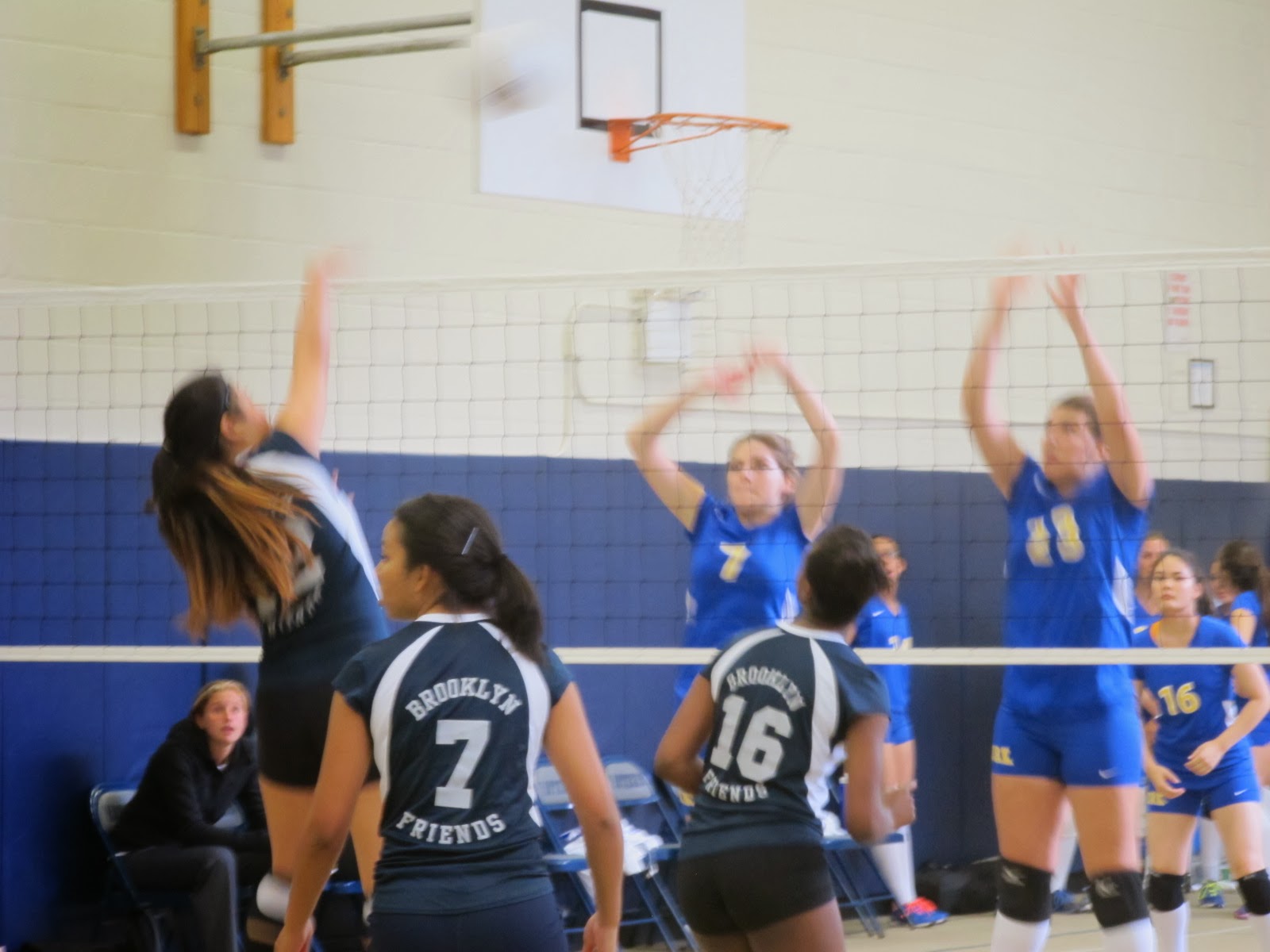 The BFS Girls Varsity Volleyball team defeated Churchill 2-0 (25-1, 25-19) on the road.  Th team continues to excel, while meeting and overcoming various challenges.  Even though we played inconsistently during the match, we still outplayed Churchill to earn the victory.  We continue to show great flexibility as a team, since the last 2 weeks we had to change the rotation due to illnesses and injuries.  Hopefully everyone gets healthy soon so we can continue developing together in preparation for the play-offs.  Overall the team continues showing a good understanding of our strengths and weaknesses.  Onward and upward. 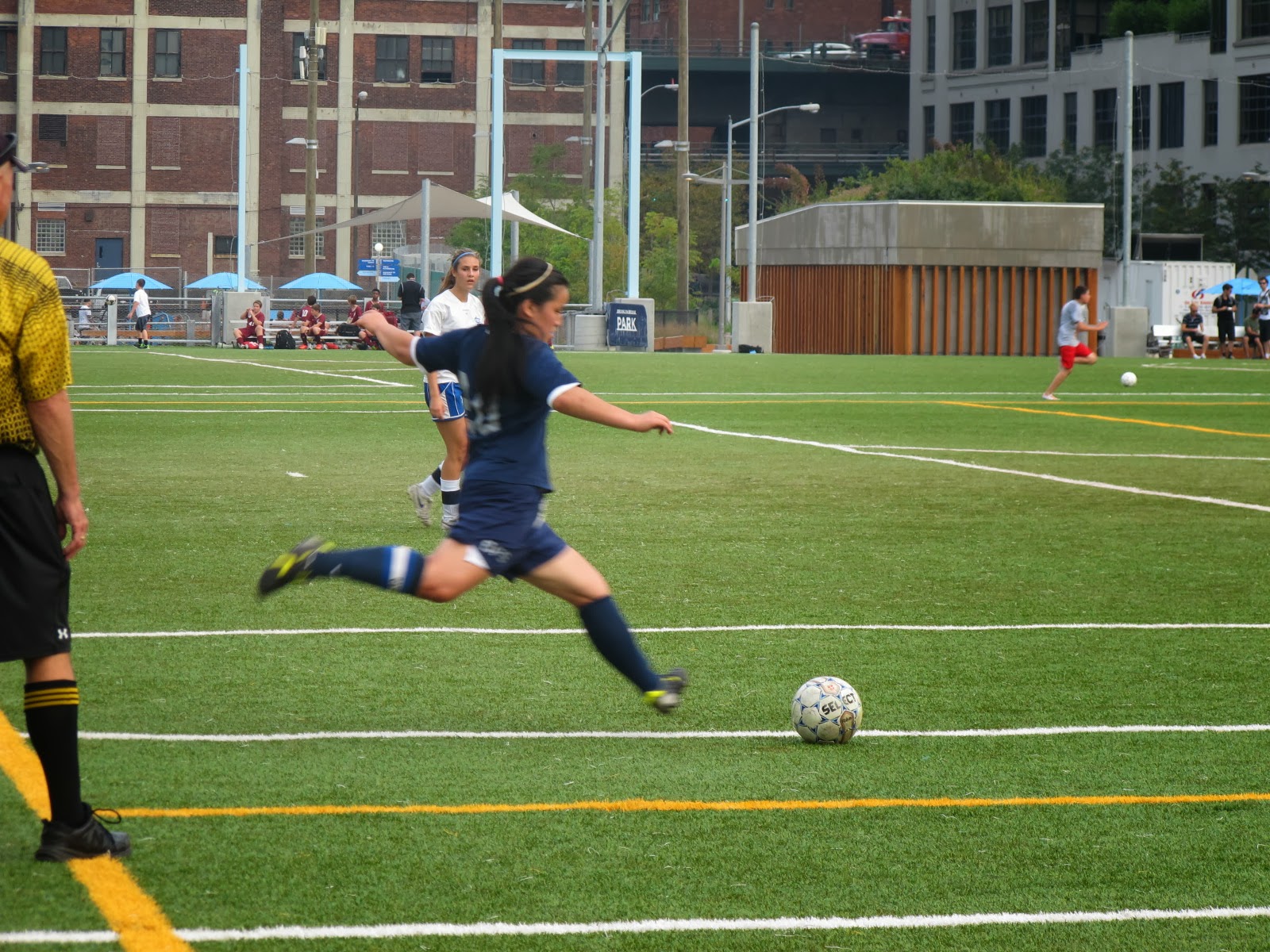 On Tuesday the BFS Girls Varsity Soccer team played to a 2-2 tie at Randalls Island versus UNIS.

BFS 2-2 UNIS  (Half-Time 1-0)  Goalscorers: Halima (2) Assists: Aoife (2)  Two assists from #7 Aoife and two goals from #13 Halima nearly caused an upset, only for UNIS to equalize in the last minute of the game to tie 2-2.  The Panthers took the lead through Halima’s low strike on goal after breaking free of the UNIS back line. This was after UNIS had just hit the crossbar from a shot from distance.  This would be the ebb and flow of the game, UNIS peppered shots from distance unable to break down the BFS defense, leaving the Panthers’ strike force to counter attack with purpose.  After UNIS equalized to make it 1-1, the Panthers responded with #13 Halima’s 2nd goal of the season. BFS were defending deeper and deeper trying to hold onto the win, but UNIS scored from a volleyed finish after BFS had conceded a corner. The UNIS #19 had lost her marker at the back post and was unmarked 6yards out and made no mistake from close range. 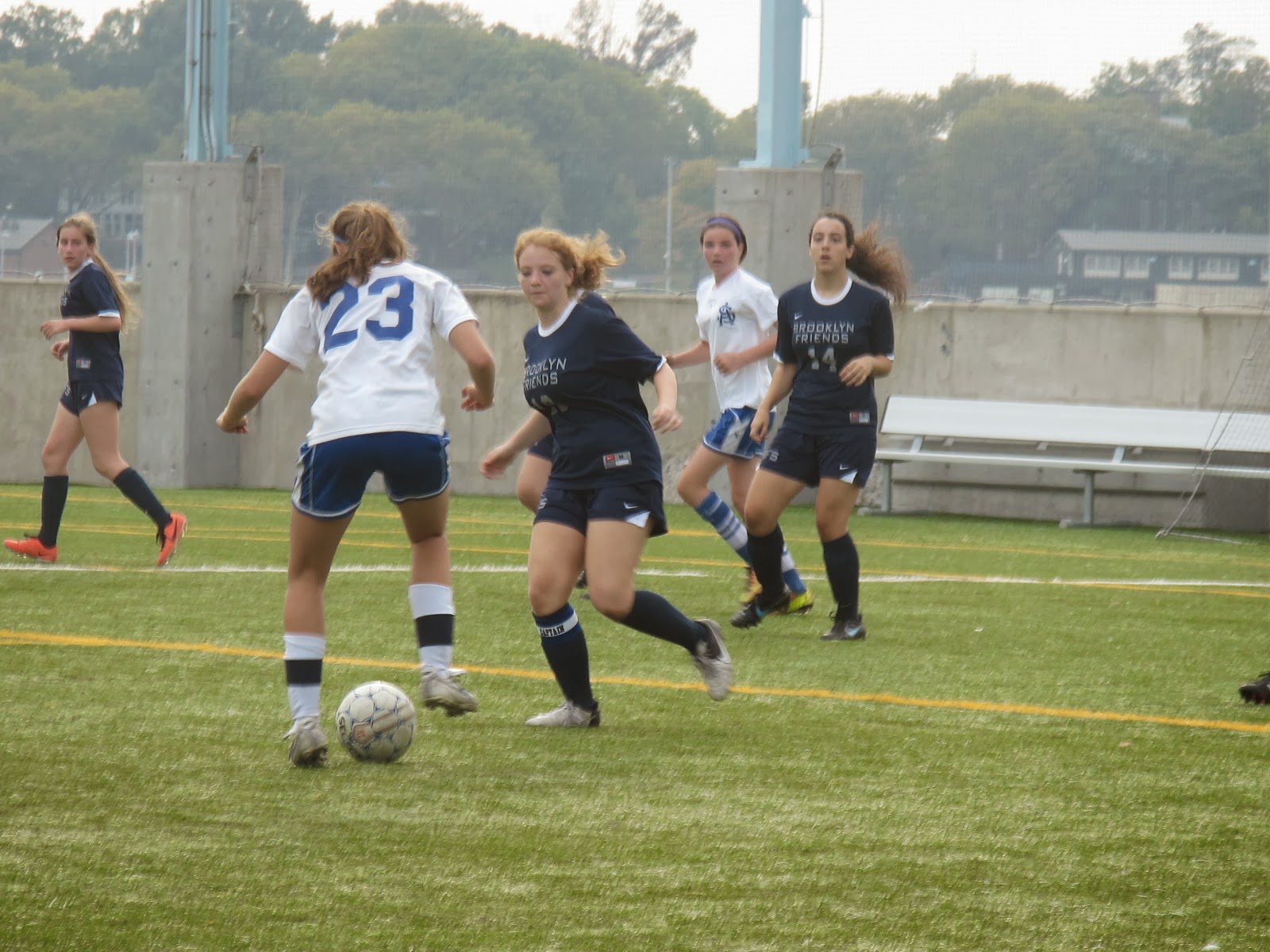 BFS 6-0 York Prep (Half-Time 4-0) Goalscorers: Halima (4), Aoife (2) Assists: Halima (2), Aoife, Olivia Saved Penalty: Sophie  #13 Halima and the team celebrated the Panthers’ Freshman scoring her 50th goal in only 21 games, as BFS Girls Varsity were victorious against York Prep and maintained their undefeated streak this season.  The Panthers are also yet to concede a single goal in ISAL league play and move to a record of 5-0-3. (3-0-0 ISAL). This was under threat early in the first half after a penalty was awarded for a handball in the box. #1 Sophie dived low to make a great save and protect the clean sheet.  #13 Halima started the rout with an early finish after a through-ball from #7 Aoife. The first goal of the day was a milestone in BFS girls soccer history with it being Halima’s 50th goal. She would extend her tally to 53, and 19 in the season by the end of the game. #7 Aoife scored a brace of goals, with a notable impressive 2nd strike from the edge of the 18 yard box.  #12 Naya’s excellent man-marking job on York Prep’s #13 helped nullify her threat and hindered her ability to effect the game and help BFS to finish the game with a 6-0 victory. 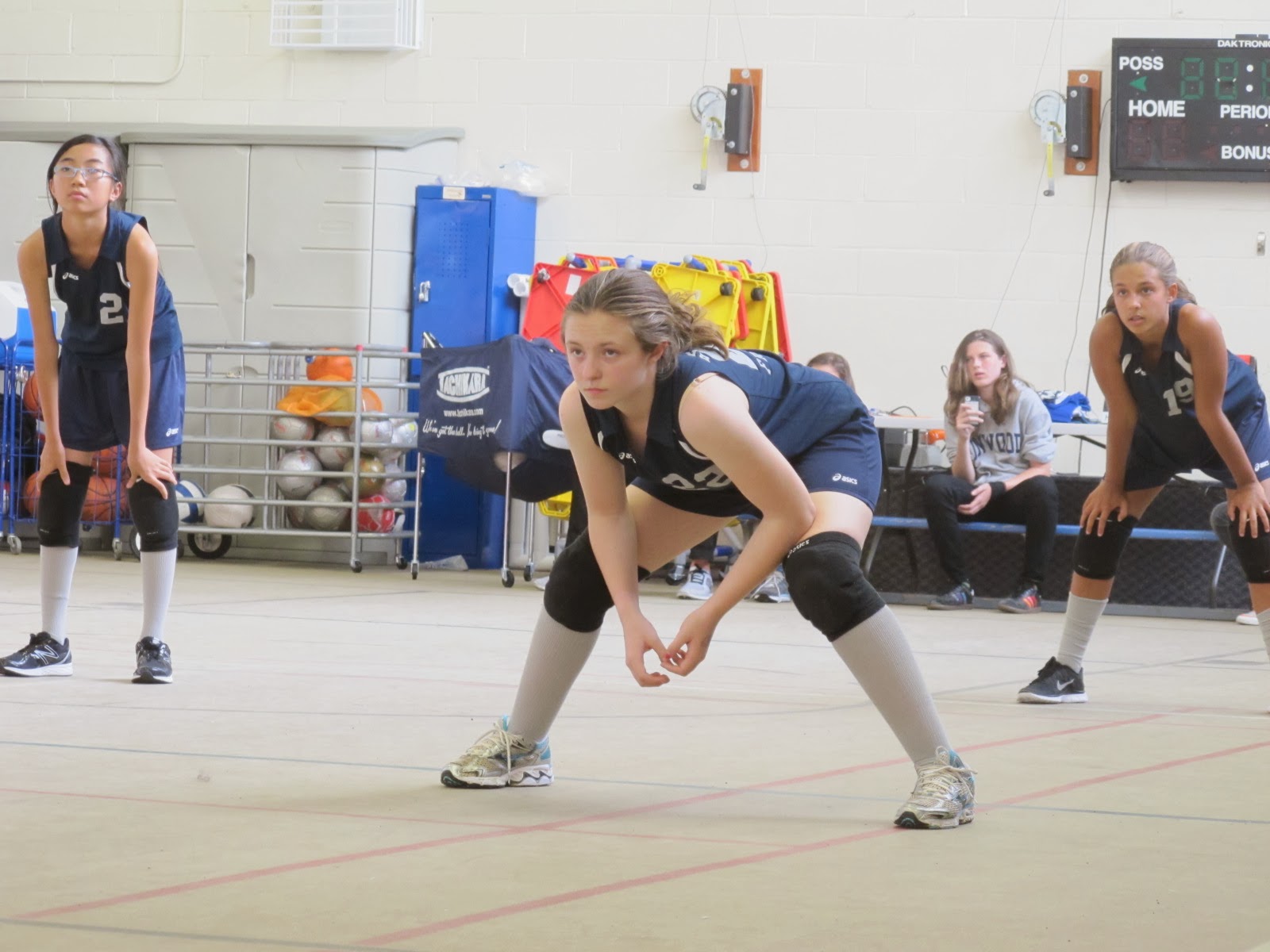 The BFS MS Girls Volleyball team defeated Dwight 2-0 (25-8, 25-7) in the upper gym for their second win of the week.  With the crowd cheering us on we put up most points with consecutive
serves. Maxine S. with 10, Lucy S. 6, and Joy F. 5.  The girls also put new
tactics into play.  Our setters communicated well and the team worked
together to pass the ball to the setters and over the net. The girls
advance their skill level with every game.  Blue Pride!! 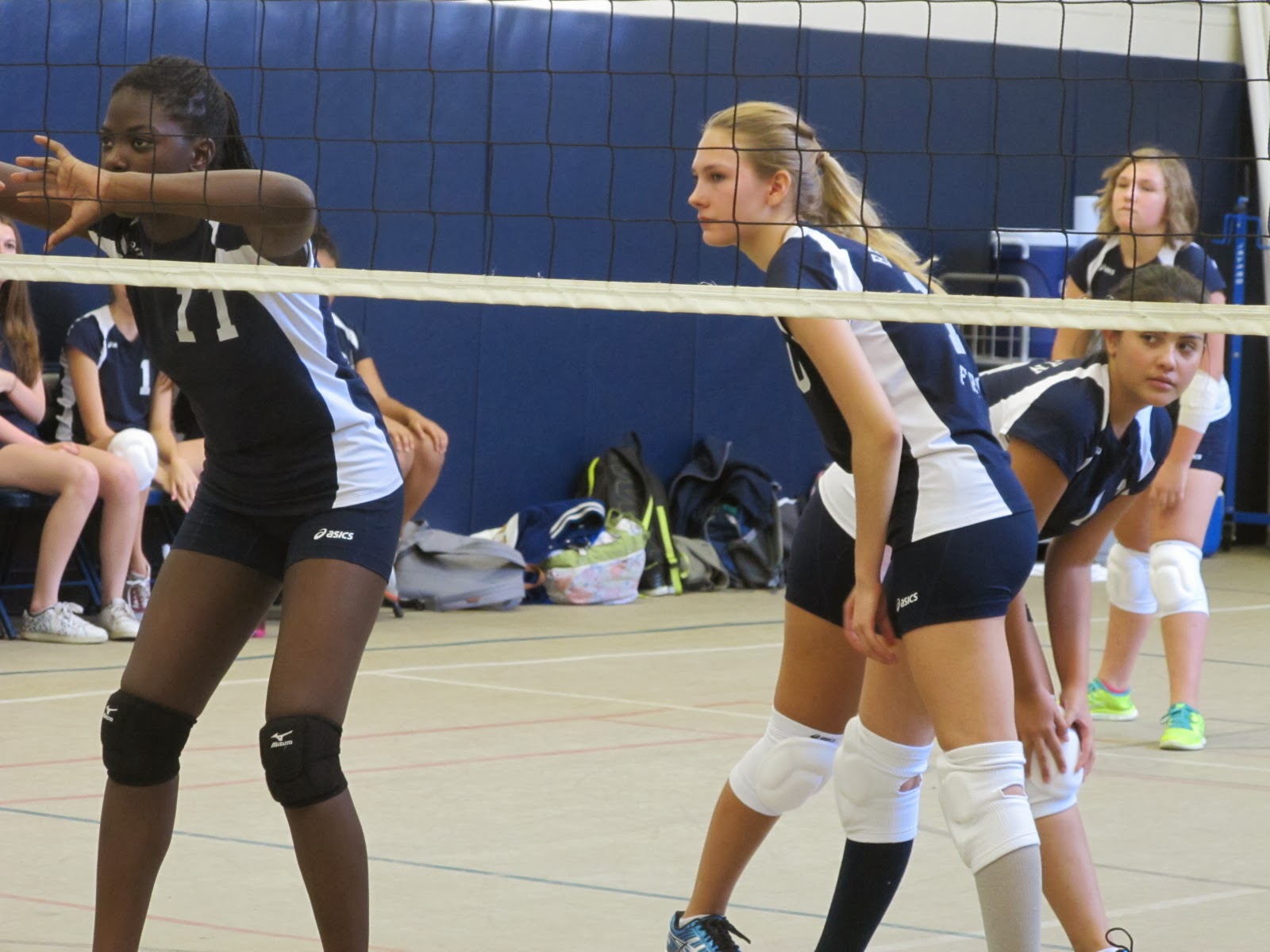 The JV Volleyball team defeated Dwight in an exciting three-set match on Wednesday.
All fourteen players present contributed to this win.  Throughout the
match BFS players showed improved court movement, serving consistency
and team communication.  BFS dominated in the first set outscoring their
opponent 25 – 18.  In the second set BFS concentrated on making more
3-touch (pass-set-spike) plays.  This was definitely a challenge since
our opponent was quite unpredictable and most often put the ball back
over to our side of the court in one touch. Midway through the set
Dwight was able even up the score and won by serving better at the end,
winning with a score: 21 – 25.  BFS dominated right from the start of
the third and deciding set, never looked back, and won with a 25 – 21
margin.  The players are to be congratulated for this team victory –
Blue Pride! 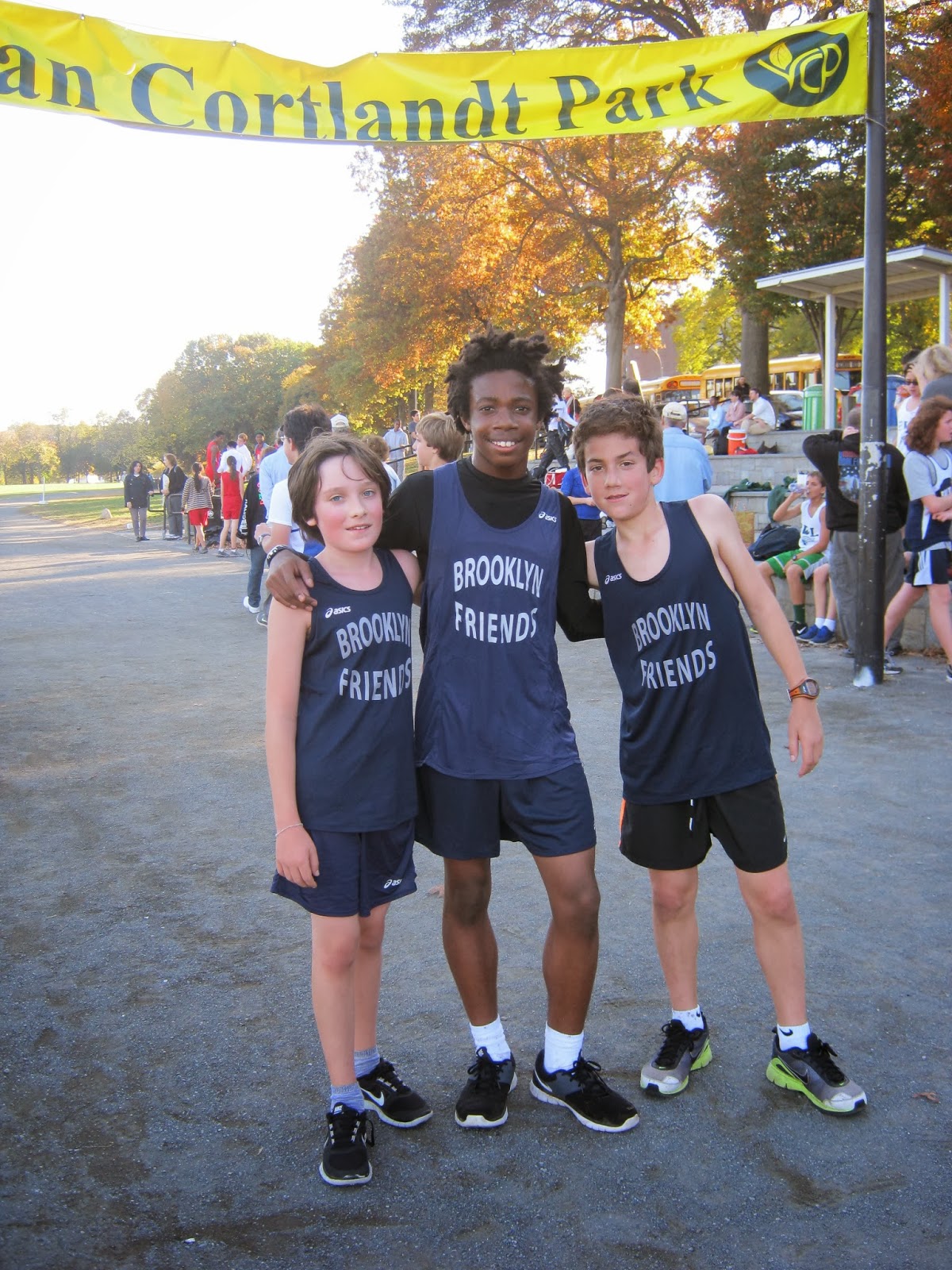 The Brooklyn Friends cross country team is rounding into shape. Three runners joined Miles Nabritt for the second race of the season at Van Cortlandt Park. It was a beautiful Indian summer day for the athletes and they took advantage of the fine conditions.
Helen Lipsky started the afternoon races off with a solid sixth place finish out of twenty runners in the middle school competition. This was the first race for the seventh grader. She was not intimidated by the hilly course or scrum of runners who began the race. Helen ran steadily and confidently. Continued dedication to her training and added experience will help her climb even farther up the results lists in her next competitions.
Giovanna Molina and Maya Kaul placed second and fourth, respectively, out of seventeen runners to lead the BFS Varsity girl’s team to a strong showing in their first ISAL competition for the season. Giovanna took the lead after three quarters of a mile of the 3.1 mile race as she entered the rolling hills of the middle segment of the race. Maya was close on her heels in fourth.
This part of the races shows the athletes’ mettle. The BFS woman demonstrated a resolve to finish strong. Only a need for a little seasoning of hill practice kept the athletes from pulling away from the competition. Giovanna exited the woods in second place and Maya was fourth. They maintained these positions to the finish line.
Miles Nabritt continued his successful cross country season. He placed second. More importantly, he beat three of the runners who finished ahead of him in his previous race. Miles gained confidence and experience from his first race and used this consciousness to attack the first third of the race more aggressively and run the middle section of hills with greater abandon and intent.

The competition was right with Miles for the final half mile of the race. This part of the race is where desire decides the outcome. Not lacking in this department, Miles held onto to second place with the third and fourth place pursuers only four and six seconds behind. It was an exciting finish to a fine day for the BFS cross country team. 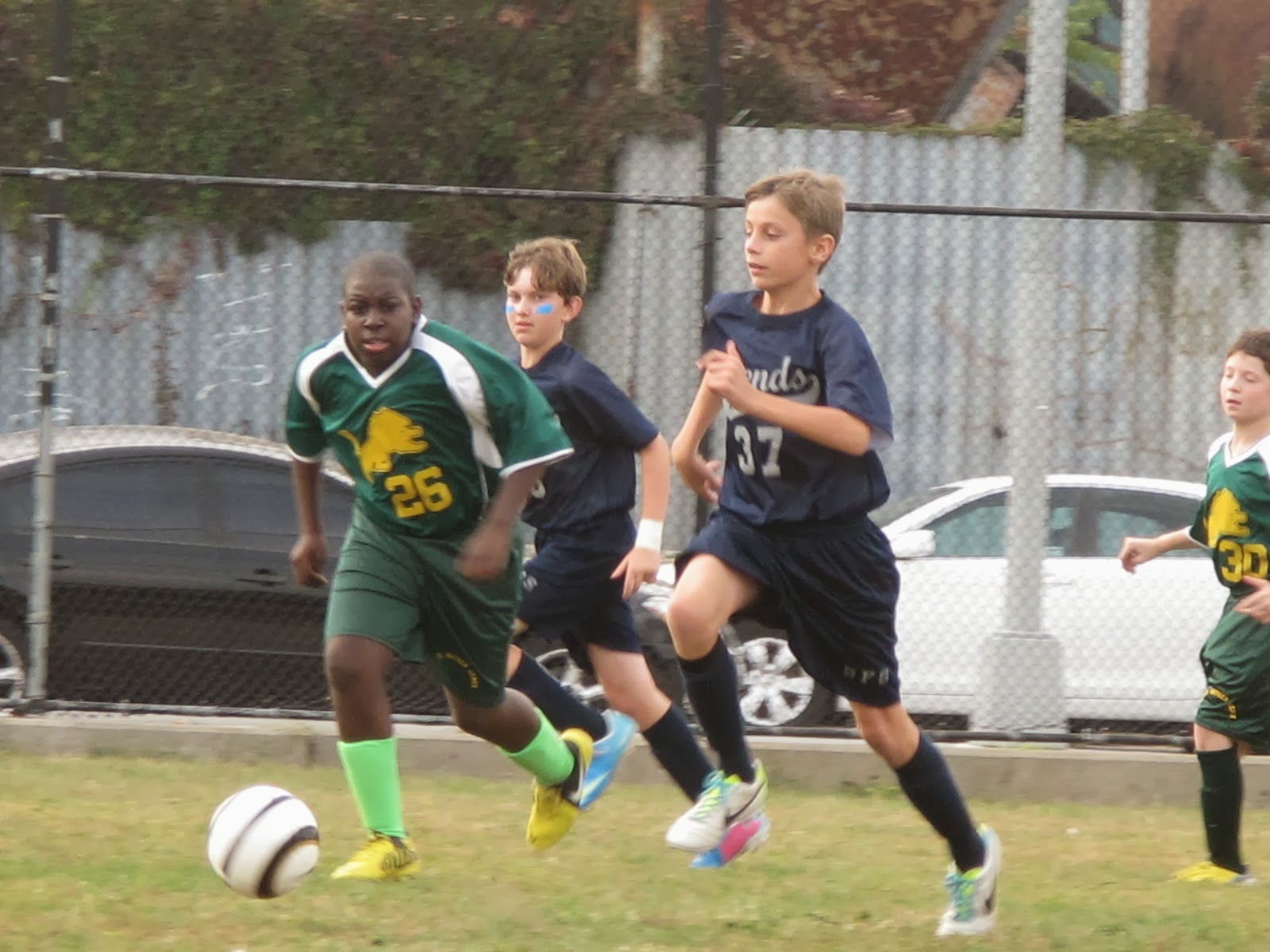 On Thursday the BFS MS Boys Soccer team was looking to extend their winning streak
against a strong BWL team.  In the early stages of the game BFS had
large spells of possession but were unable to find the breakthrough.
Miles B. went closest but his close range shot cannoned off the top of
the crossbar.  At the other end, BWL were causing the defense problems
but the heroic defending of Luca J. and Owen B. kept the attack at bay,
resulting in a 0-0 halftime scoreline.  The stalemate continued in the
second half, although Ben B. was very unlucky to see his effort on goal
hit the crossbar once again for BFS.  The deadlock was finally broken
after 45 minutes.  Ben B. raced on to a diagonal ball from Miles B. and
slid the ball across the goalie and into the far right hand corner.  The
BFS defense were under immense pressure in the closing stages of the
game.  Just when it looked like they may hold out for the win, they
conceded a penalty for handball with 2 minutes left on the clock.  The
BWL striker kept his composure to level the score, although BFS can take
credit for their hand-working and well organized performance. 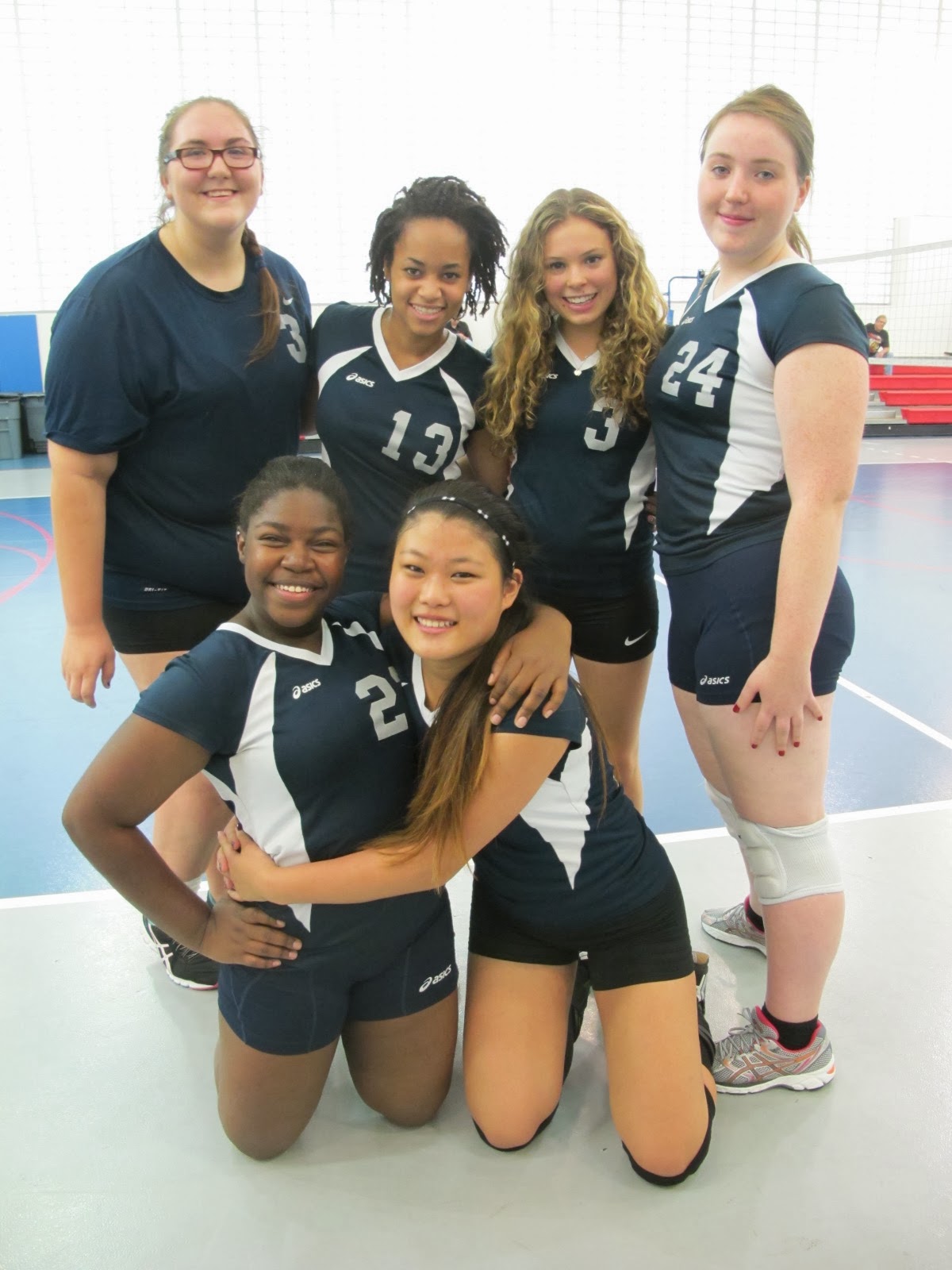 On Friday the BFS Girls Varsity Volleyball team defeated UNIS 2-1 (26-24, 21-25, 25-23) in a very exciting match at St. Francis College.  After playing one of the most inconsistent
matches of the season two days ago, and after some adjustment at practice
yesterday, today we played the best match so far.  UNIS is a very good and organized team, but tonight we had
the upper hand and came away with the victory.  The first set was probably the best come back of the
season.  We were down 24-19, and
after UNIS missed the serve, we rallied behind Chloe B.’s serve to establish our
mindset for the match.  We played
to compete and fight for every point.
At the end of the match we got rewarded with a good win against a great
team. 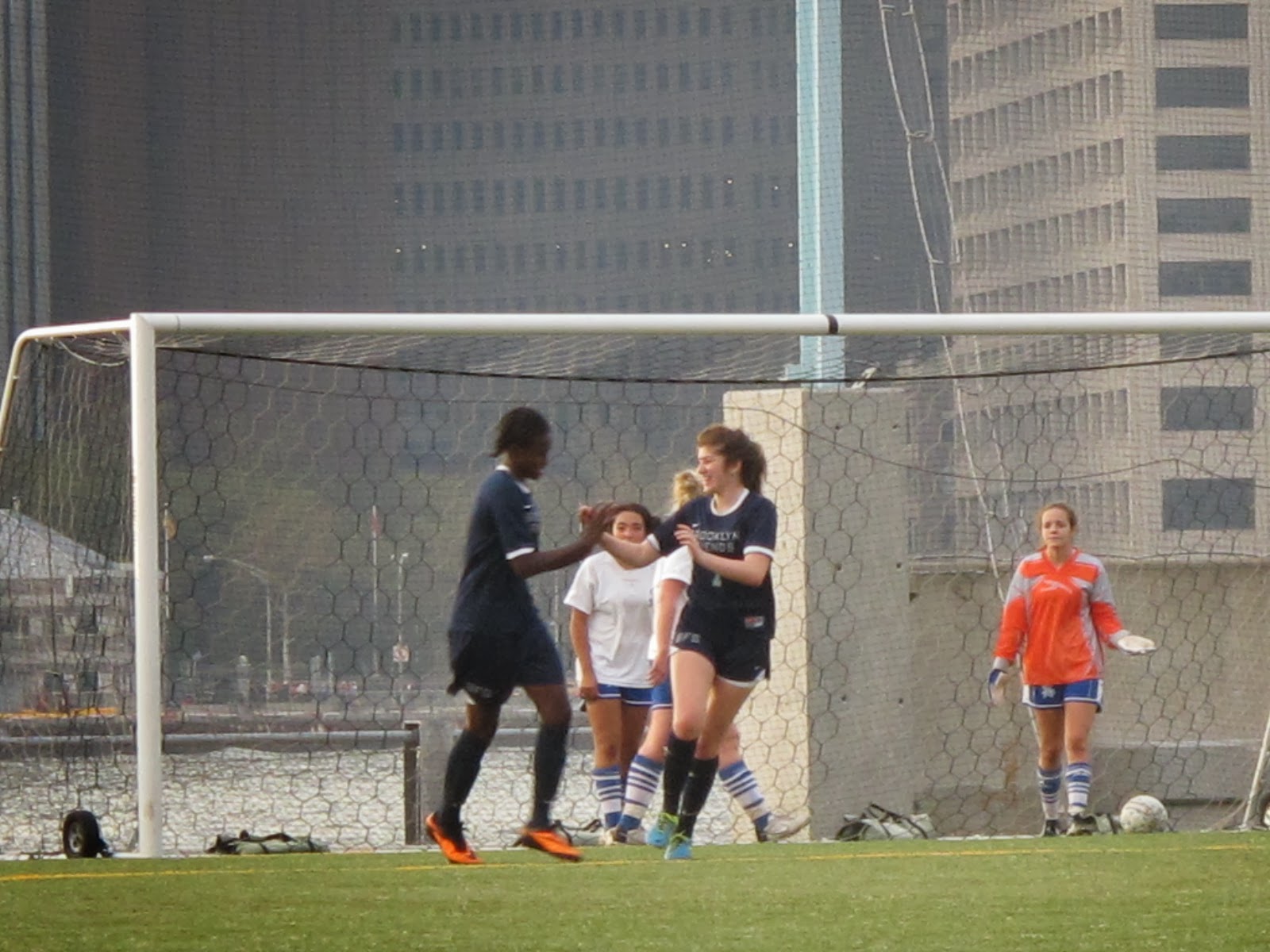 #13 Halima M. scored all five goals taking her season tally to 24 goals and all five were assisted by #7 Aoife H.
Although Saint Ann’s outshot BFS 25-9 and enjoyed
the better of possession, the difference was in how clinical BFS were in
front of goal. Many of the Saint Ann’s shots were from distance and
rarely troubled the BFS goal.
Early in the 1st half #1 Sophie A. pulled off an
excellent blank-point save, only for BFS to breakaway and take a 1-0
lead after a superb turn and shot from #13 Halima M. Three minutes later
BFS extended their lead to 2-0.
With a 2-0 scoreline at half-time, Saint Ann’s
chased the game and got their rewards in the 55th minute, capitalizing
on a defensive mix-up and goalkeeping error to make it 2-1. But 60
seconds later, BFS would restore the two goal cushion with another
breakaway goal after good combination play from #13 Halima and #7 Aoife.
On 62mins, the score was 4-1 with #13 Halima M. scoring with a header in the 6yard box from a dangerous corner by #7 Aoife H.

Saint
Ann’s would score again before the end of the game to close the gap to
4-2, only for BFS to kill the game off with two minutes remaining and
#13 Halima breaking away to score the Panther’s fifth goal of the game.