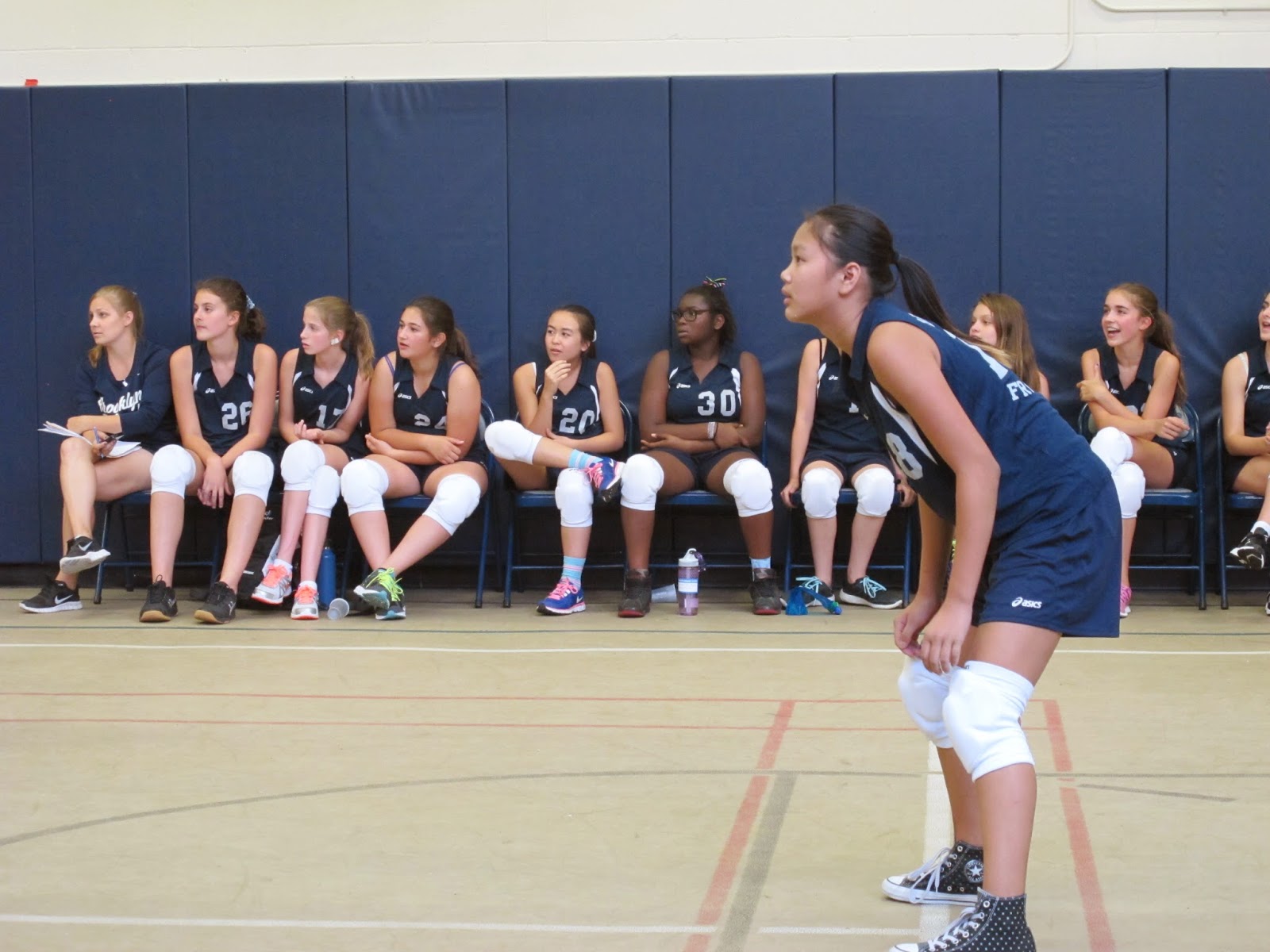 On Monday the BFS MS Girls Volleyball Team defeated Dwight 2-0 (25-23, 25-13) in the upper gym. The team played a captivating first set, keeping up multiple volleys throughout the game. Sylvie B. stepped up with four consecutive serves during the second set. Charlotte T., Violet G., Maxine S., Grace F., Galen J., and Milla S. kept the energy level up with their swift movements and communication throughout the game.

The BFS MS Boys Soccer Team defeated Staten Island Academy 7-0 at Brooklyn Bridge Park. Today the BFS middle school boys soccer team enjoyed a comfortable victory over. It was an organized and well-disciplined performance, with some fine attacking play from the first whistle. BFS took control straight away, forcing the SIA goalie into making some fine saves. The teams patience was rewarded when they took the lead after 12 minutes of play. Gabe D. latched onto a pass from Coby W. to score his second goal of the season. Three minutes later BFS doubled their lead. Thomas L-H opened his goal scoring account for the season by converting on a cross from Jack B. Then Miles B. made it 3-0 in the 26th minute as he beat the defender to a Coby W. through ball and finishing calmly to give BFS complete control. On the stroke of halftime Zaine O. made it 4-0. A long ball out of defense from Tenzin C. was picked up by Thomas L-C and his unselfish square pass set up Zain O. who finished in style. The second half was much of the same story. A penalty kick from Miles B. made it 5-0. Then Miles B. turned from scorer to provider in the closing minutes. His pass found Lewis W. who scored with a long range shot from outside of the penalty area. BFS rounded off a fine display through Jack B. who finished from close range after racing onto a pass from Gabe D. It has been an excellent start to the season for BFS, and the team will be looking to continue their unbeaten start to the season as they take the field again Tuesday. 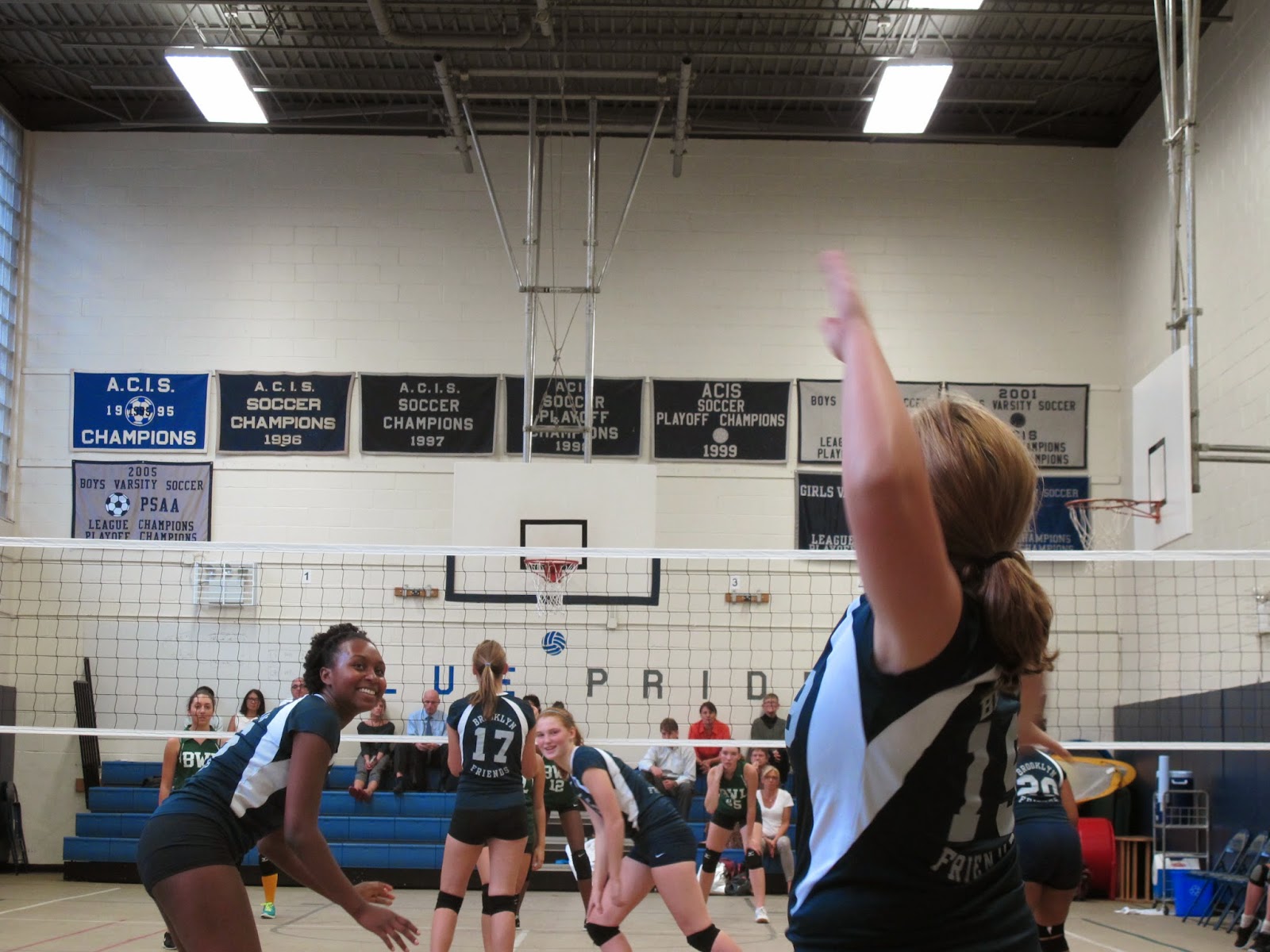 The BFS Girls Varsity Volleyball Team defeated Dwight 3-1 (25-1, 25-11, 21-25, 25-16) at the Dwight Athletic Center. The game against Dwight was a very unique experience. After a dominating first set, behind the strong serves of Charlotte S. and Fiona S., to win 25-1, both teams settled in to play a more consistent and even match. We ended up winning 3-1, after loosing one of our players to an injury. Our team continues developing its character through the various challenges of the game. We’ve been able to continue learning and developing our consistency, as we keep adjusting our rotation. Everyone continues contributing and working together. Blue Pride! 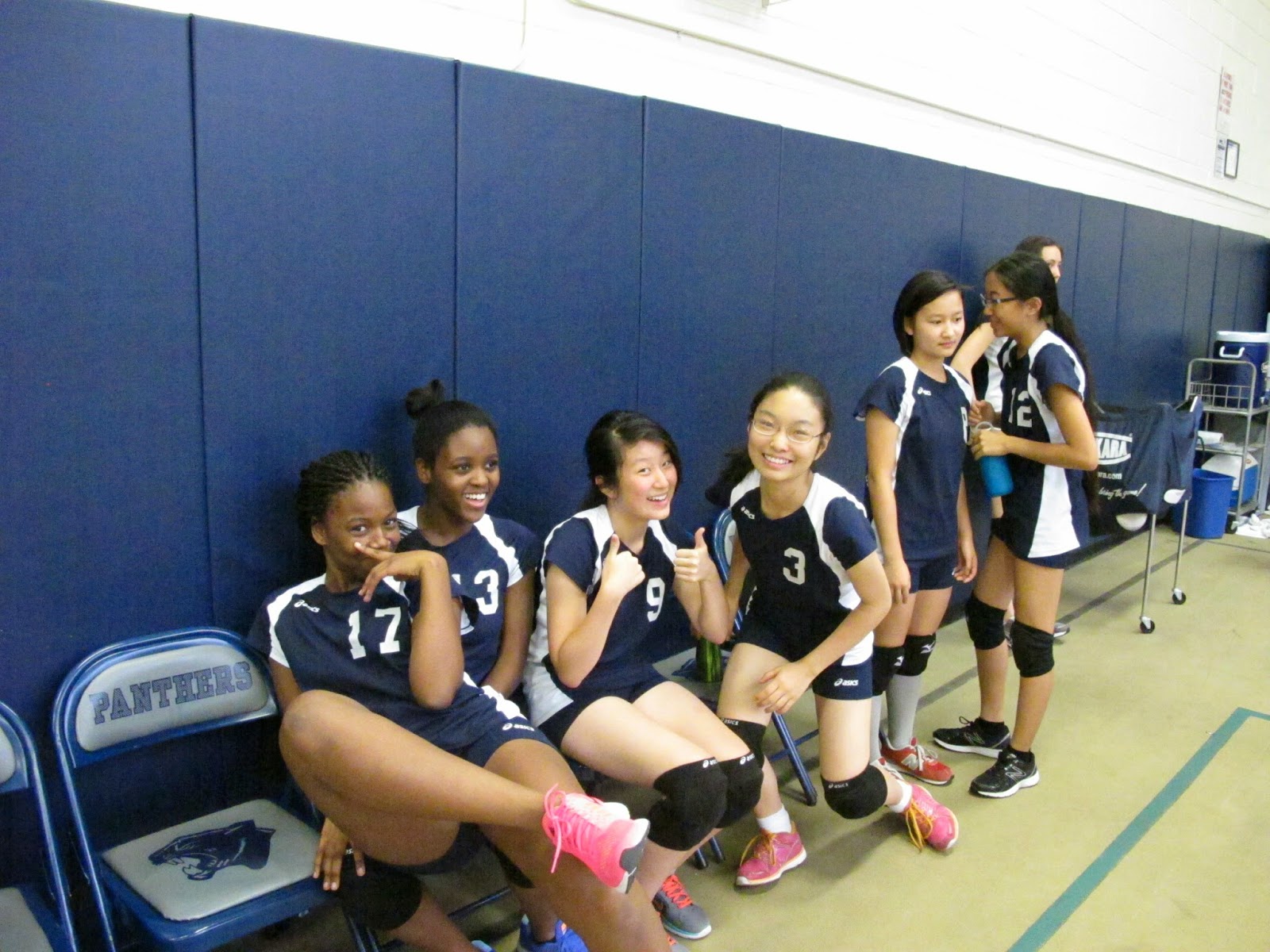 The BFS Girls JV Volleyball Team defeated Dwight 2-0 (25-22, 25-13) in the upper gym. The team continued its winning streak. The first set was neck and neck, with several lead changes, until 20 – 20. BFS dug in, took the next four service points, lost the serve and then won a side out to win the set. In our second set Naomi M. showed incredible focus at the service line, serving 15 consecutive serves (Wow), 6 of which were aces. All of our team members are gaining a better understanding of their position and improving their passing accuracy. Blue Pride! 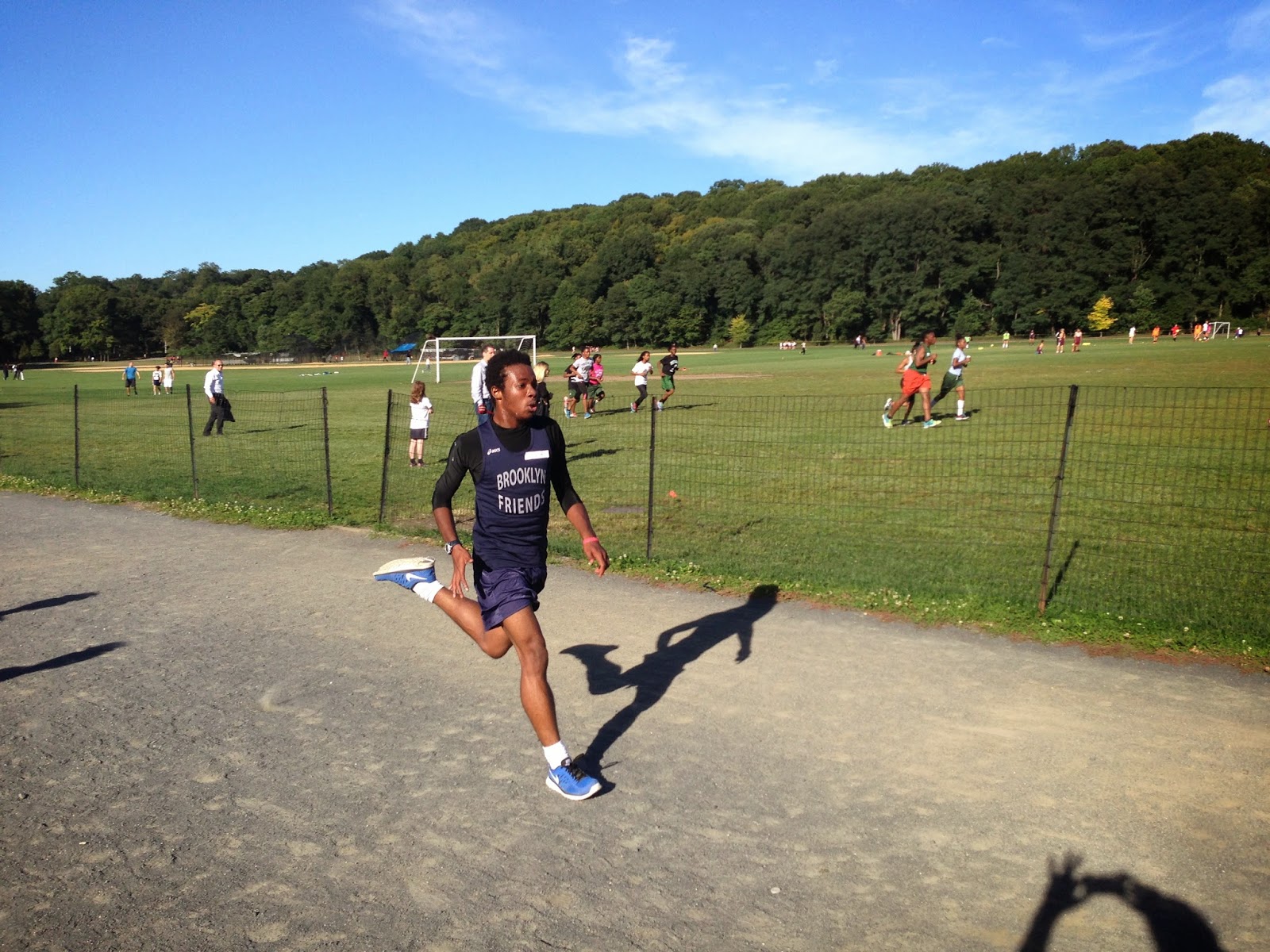 On Tuesday BFS Boys Varsity Cross Country Team participated in its first meet of the season at Van Cortlandt Park. The coach was so proud of the young men that competed in today’s meet. They arrived just in time for the meet.  During their warm ups they were so excited.  There were over 40 total participants in todays meet. Sophomore Miles N. placed 5th overall with a time of 21:00 minutes. He told the coach that he had been thinking of the race for a couple of weeks now and he really put pressure on himself to do well. He wanted to place in the top 10 and was 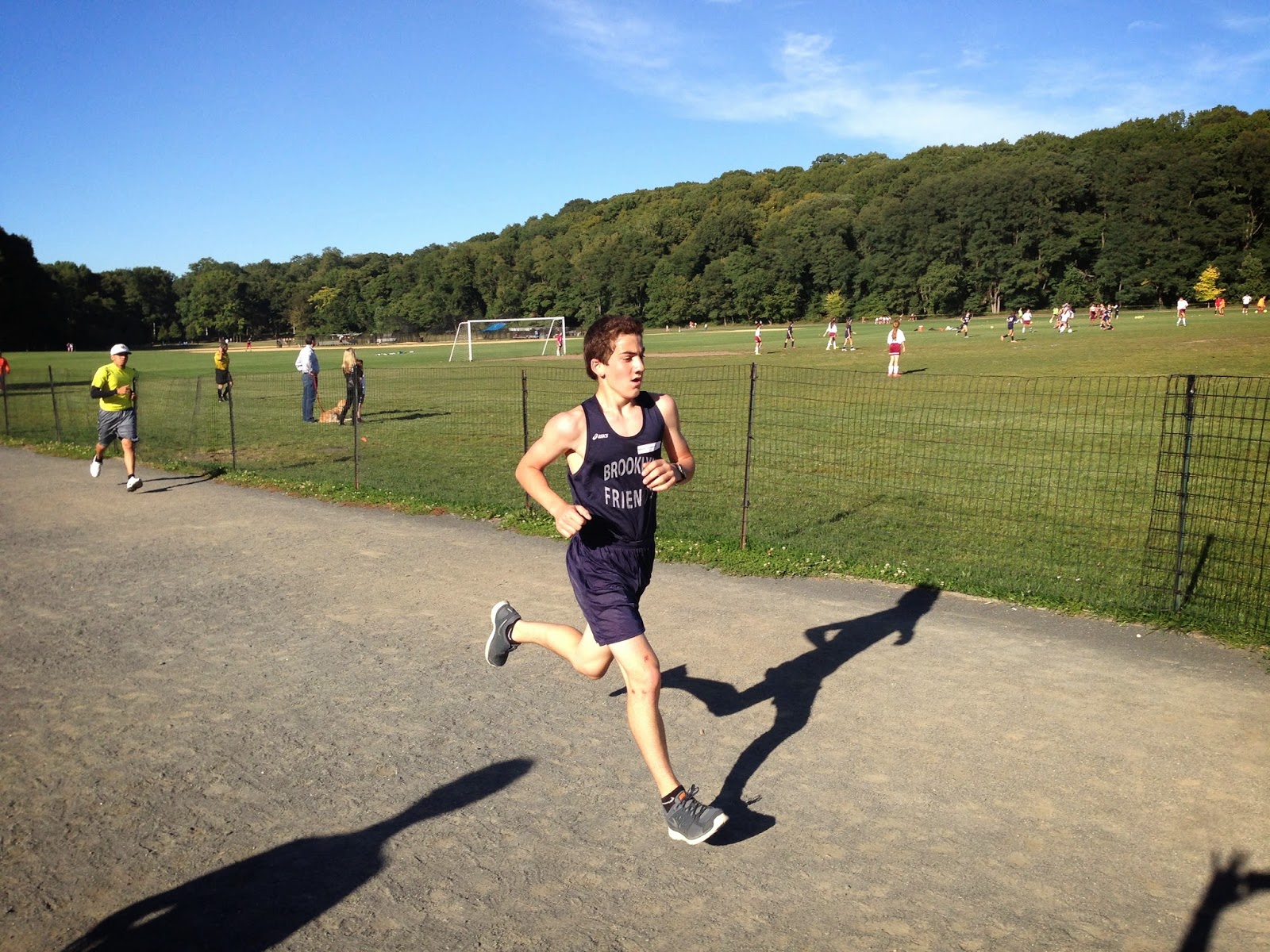 very pleased with his performance today. He is eager to continue learning and growing as a racer and competitor. Fellow sophomore Emmitt S. placed 12th overall with a time of 22:48 minutes. He came to the race with the goal of seeing where he is amongst his peers. He was using the race to see where he needs to improve. He learned today that he needs more hill training. The hills were a little challenging for him, but he was very pleased with his performance as well. Overall it was an outstanding day for our boys team. After the race, the coach and the team were treated to a BFS Cross Country tradition, the best carrot cake in NYC. Blue Pride! 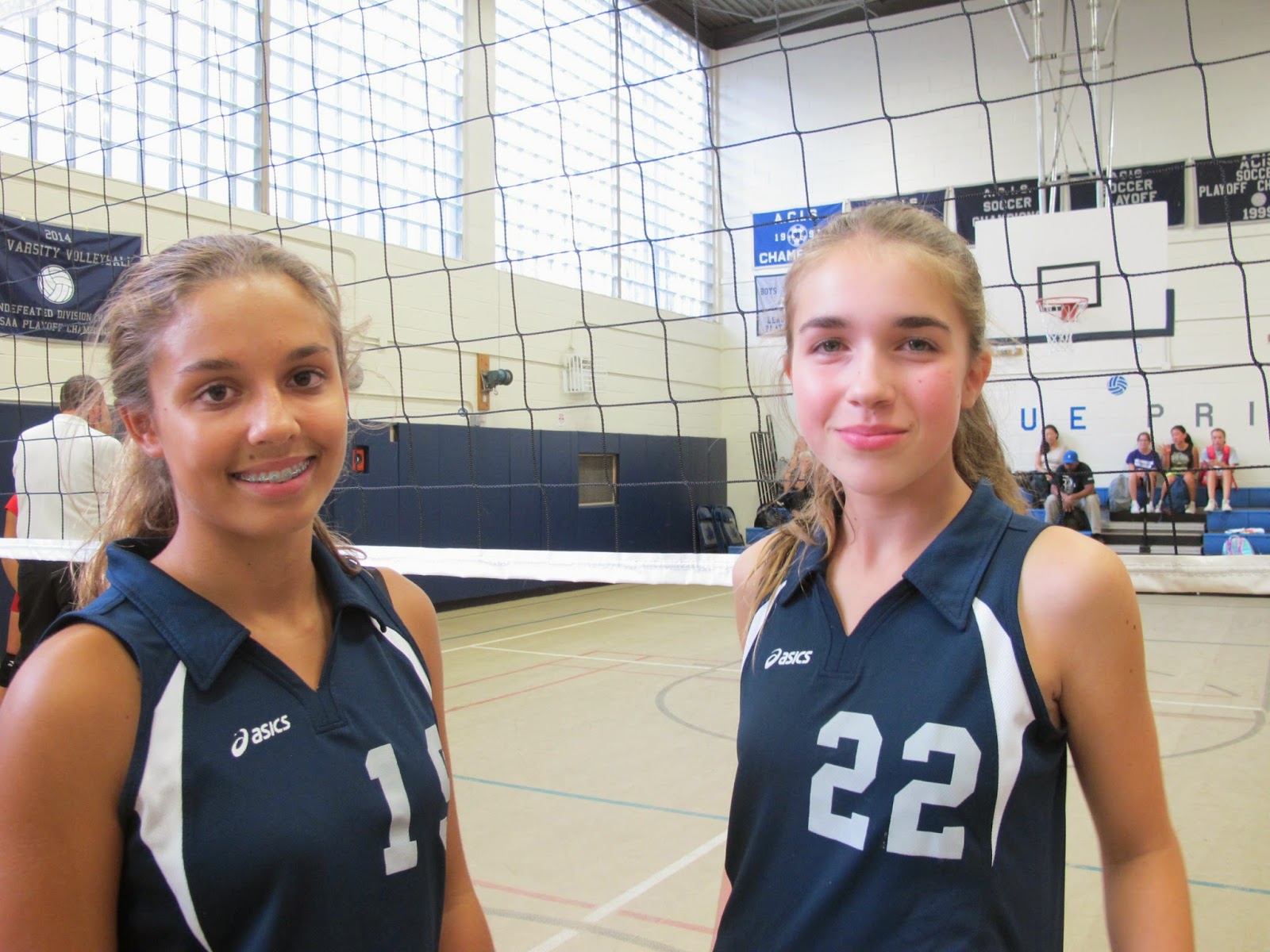 The BFS MS Girls Volleyball Team defeated Elisabeth Irwin 2-1 (25-15, 21-25, 15-10) in the upper gym. The team came out strong during first set 25-13.  During the second set the team struggled and found themselves on the losing end 21-25. The BFS girls came out strong during the third set and came out on top 15-10. Galen J. and Grace F. led us with some great serves. Both Sylvie B. and Isabelle J. had amazing saves at the net, and Maxine S. and Milla S. kept their cool and placed the ball over the net throughout the game. With each game the girls gain more confidence and trust in one another. Their communication on the court is something we continue to work on but have already improved in that area. The girls continue to work hard and show their dedication to the team.  Blue Pride!

The BFS MS Boys Soccer Team defeated Elisabeth Irwin 7-0 down at Red Hook. The team recorded their second straight 7-0 victory this week with a one sided display against their opponent. Gabe D. got the ball rolling after only two minutes. He picked up a pass from Miles B. and unleashed an unstoppable shot into the bottom corner. Coby W. made it 2-0 after seven minutes. He capitalized on a defensive error and finished emphatically for his second goal of the season. Gabe D. slotted in a rebound from a penalty kick before MIles J-P scored to make it 4-0 at halftime. The one way traffic continued in the second half. Mile B. scored a well deserved goal having picked up a delightful pass from Coby W. There were also goals from Sam E. and Zaine O. to round off the scoring. The BFS team remained organized throughout the game, particularly defensively. Finn S. put in an excellent performance in central defense, as did Ty S. on the left side. Lewis W. controlled the midfield for long periods of the game. Goalie Patrick D. posted two consecutive shut-outs. Overall, it was another outstanding performance and BFS thoroughly deserved their win. 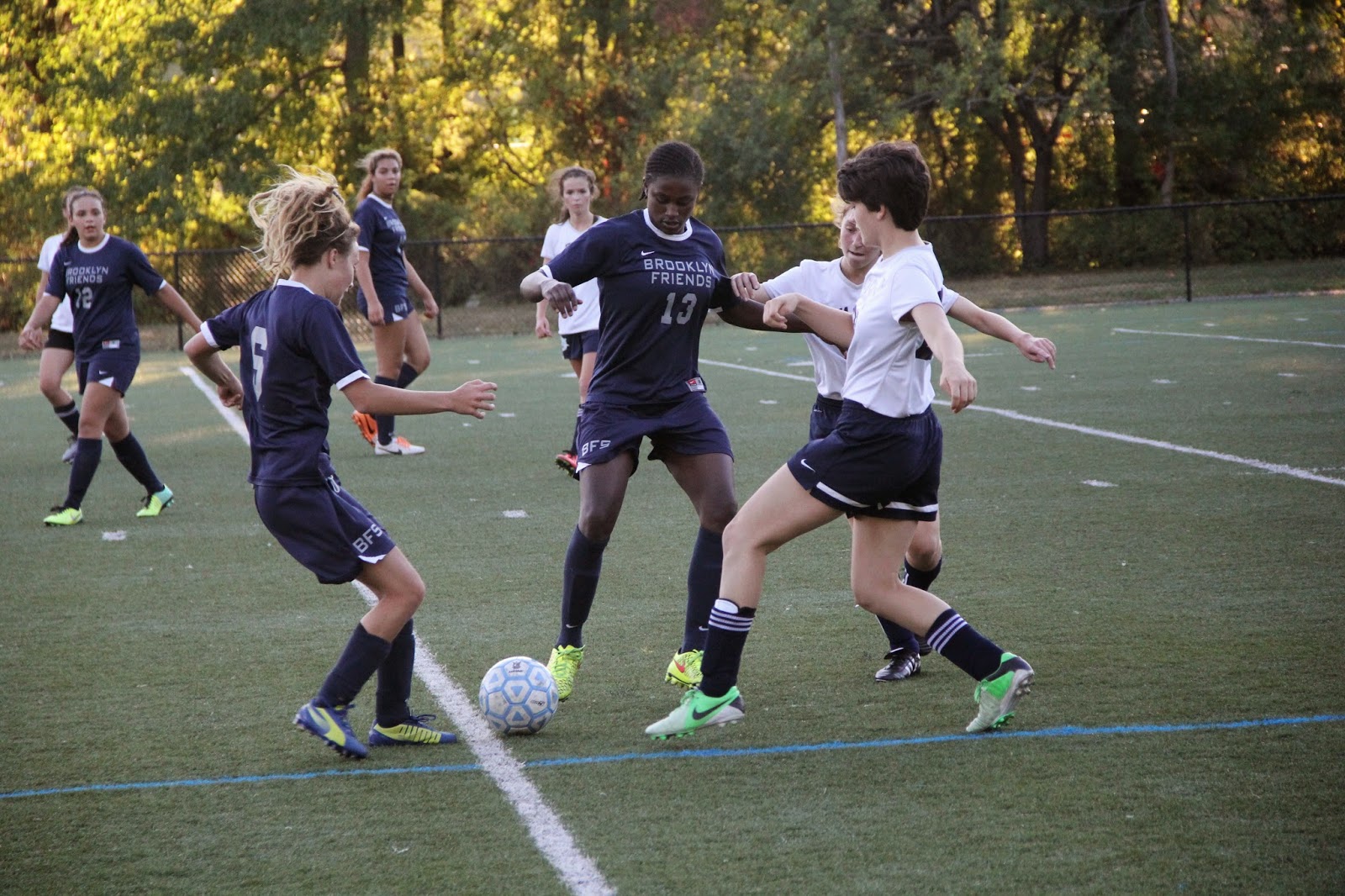 The BFS Girls Varsity Soccer Team defeated LFNY 5-1 down at Red Hook. Freshman Molly R. scored her first goal in high school soccer career. Halima M. and Devon O. had a brace of goals each to help the Panthers pick up the victory. With several seniors missing from the action due to numerous reasons, junior Naya C. stepped up as a captain and leader for the game and rallied the team to a convincing win.  Go Panthers! 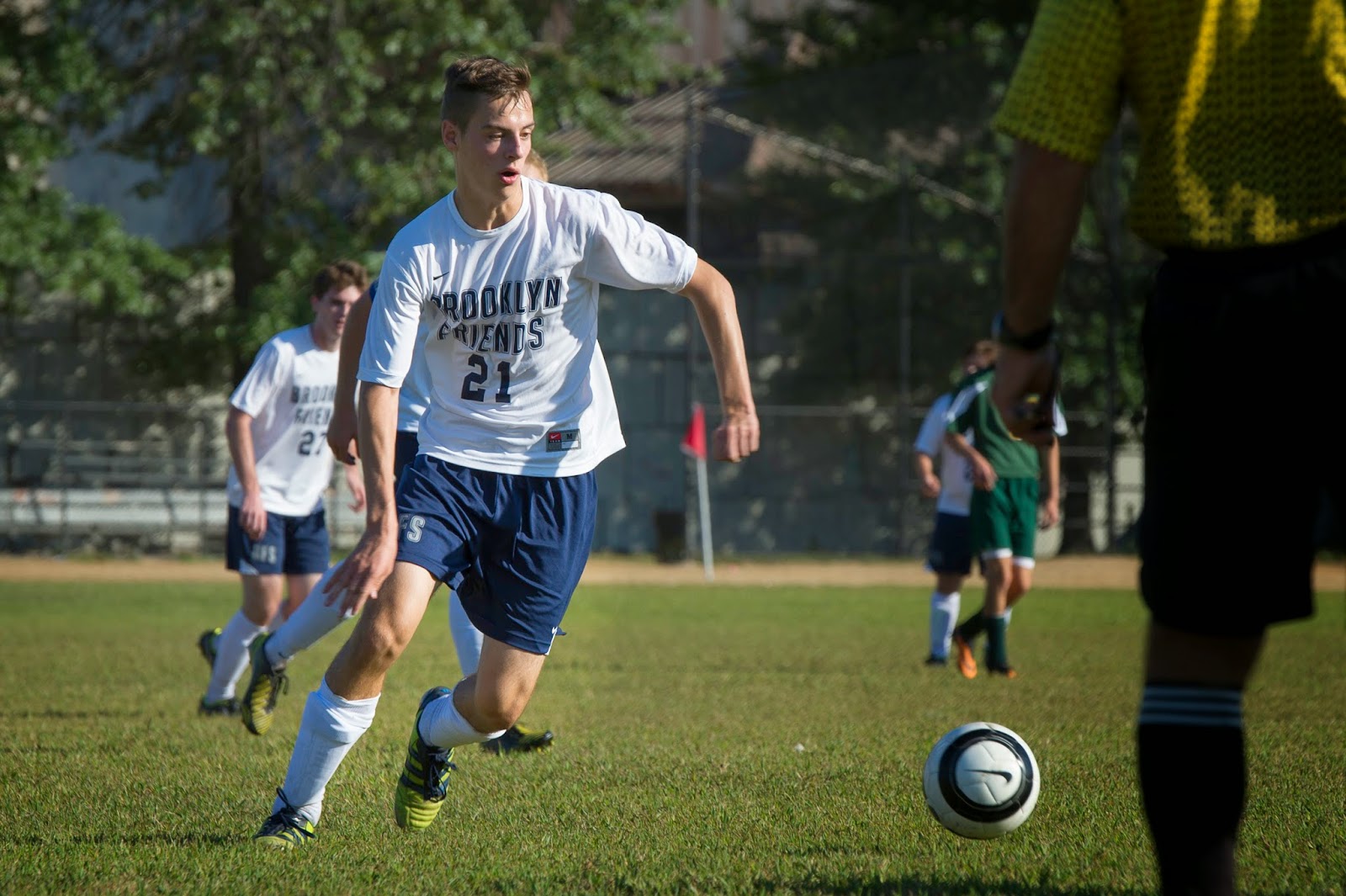 The BFS Boys Varsity Soccer Team defeated Bay Ridge Prep 5-3 on the road. The team picked up their third win of the season. The Panthers got things started quickly with a goal from Quran D. (3rd of the season) two minutes into play, assisted by Henry K.. The second goal came only five minutes later, this time by Noah W. with Henry K. playing provider once again. Henry K. completed his hat-trick of assists in the seventeenth minute after passing to Noah W. for his second goal of the game (2nd goal of the season). Henry K. got himself onto the score-sheet with ten minutes left in the first half after a perfect through ball from senior captain Lucas M. BRP got onto the scoreboard in the second half, after two goals in five minutes. But Henry K. put the game to rest with a late tap in goal to complete his brace. Honorable Mention: Omar M., Lateef F., Henry J., Sam G., Charlie H., Colin P., and Angel I. 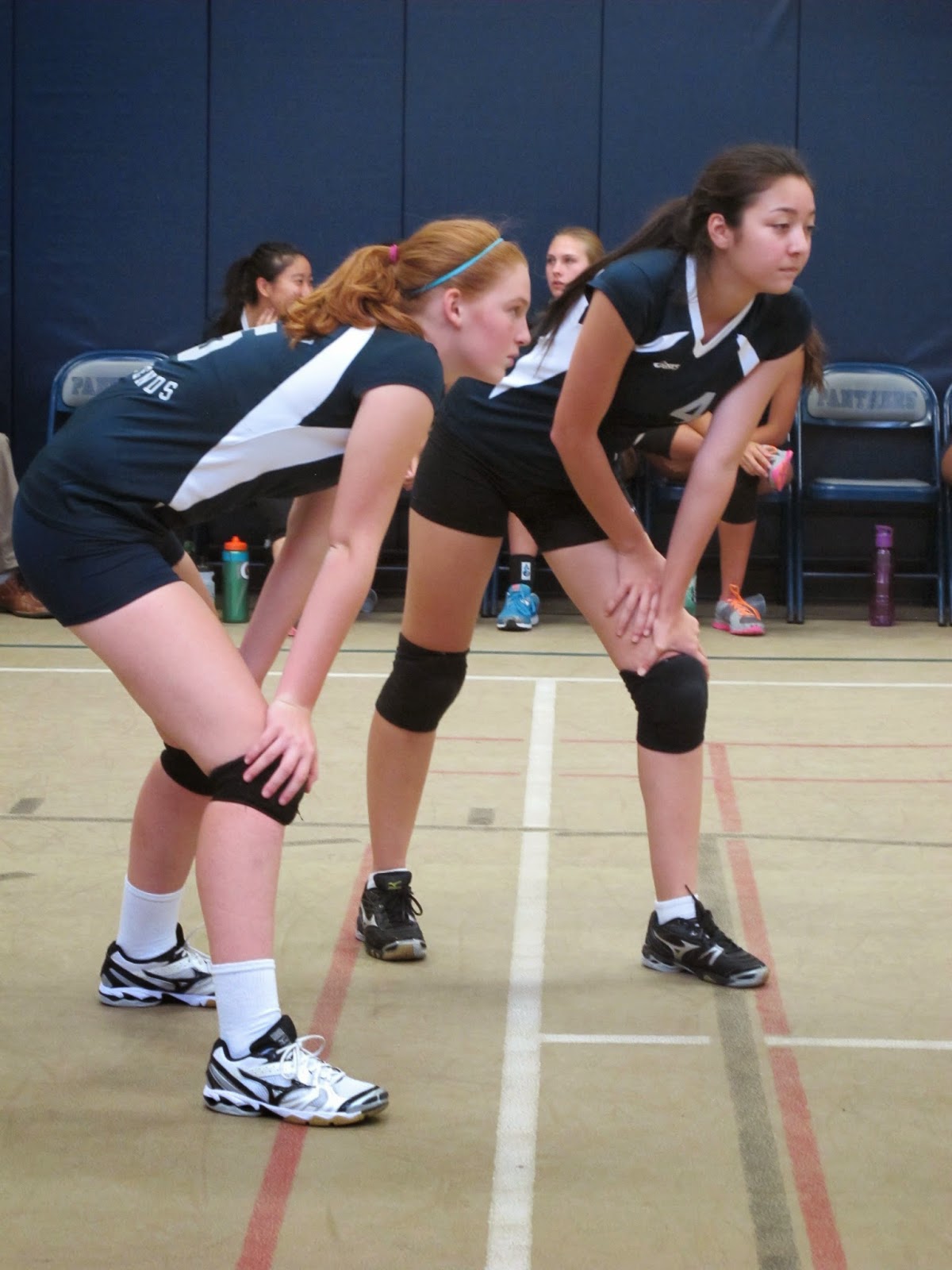 The BFS Girls Varsity Volleyball Team defeated Elisabeth Irwin 3-1 (25-9, 20-25, 25-8, 25-16) on the road. Today the team played a very competitive match, which tested our mental focus and determination. After starting the first set strong, to dominate the pace of the game, Elizabeth Irwin came back more aggressive during the second set, to win it, and test our competitiveness. At that point, we really stepped up and refocused, playing one of the most consistent matches of our young season. Everyone improved not only their skills, but their ability to stay focused and pull together the victory as a team. Overall, a great team performance against a strong opponent. Blue Pride! 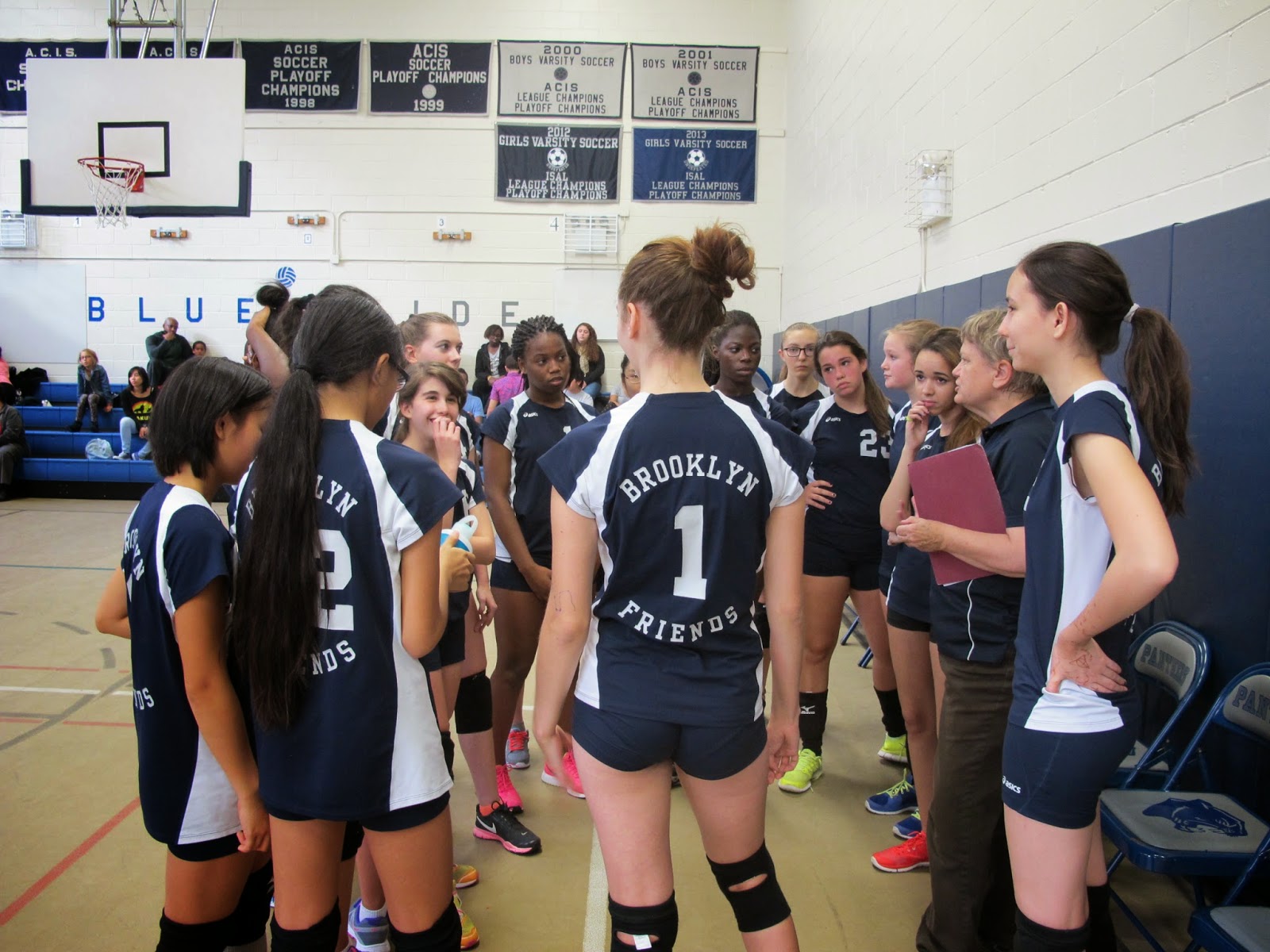 The BFS Girls JV Volleyball Team defeated Grace Church 2-1 (19-25, 25-19, 25-8, 25-15) on the road. The team had a slow start both defensively and offensively, and found themselves down 3-10 after the first four servers. Down 10-20 the girls started playing with more determination and focus, and although they lost the first set they were able to build the score up to a respectable 19-25. BFS worked hard throughout the 2nd and 3rd sets, playing as a team, supporting one another, and making smart choices. Anna L. brought us “home” in the 3rd set serving seven consecutive points and securing the victory. This match was a huge learning experience for the team! Blue Pride!