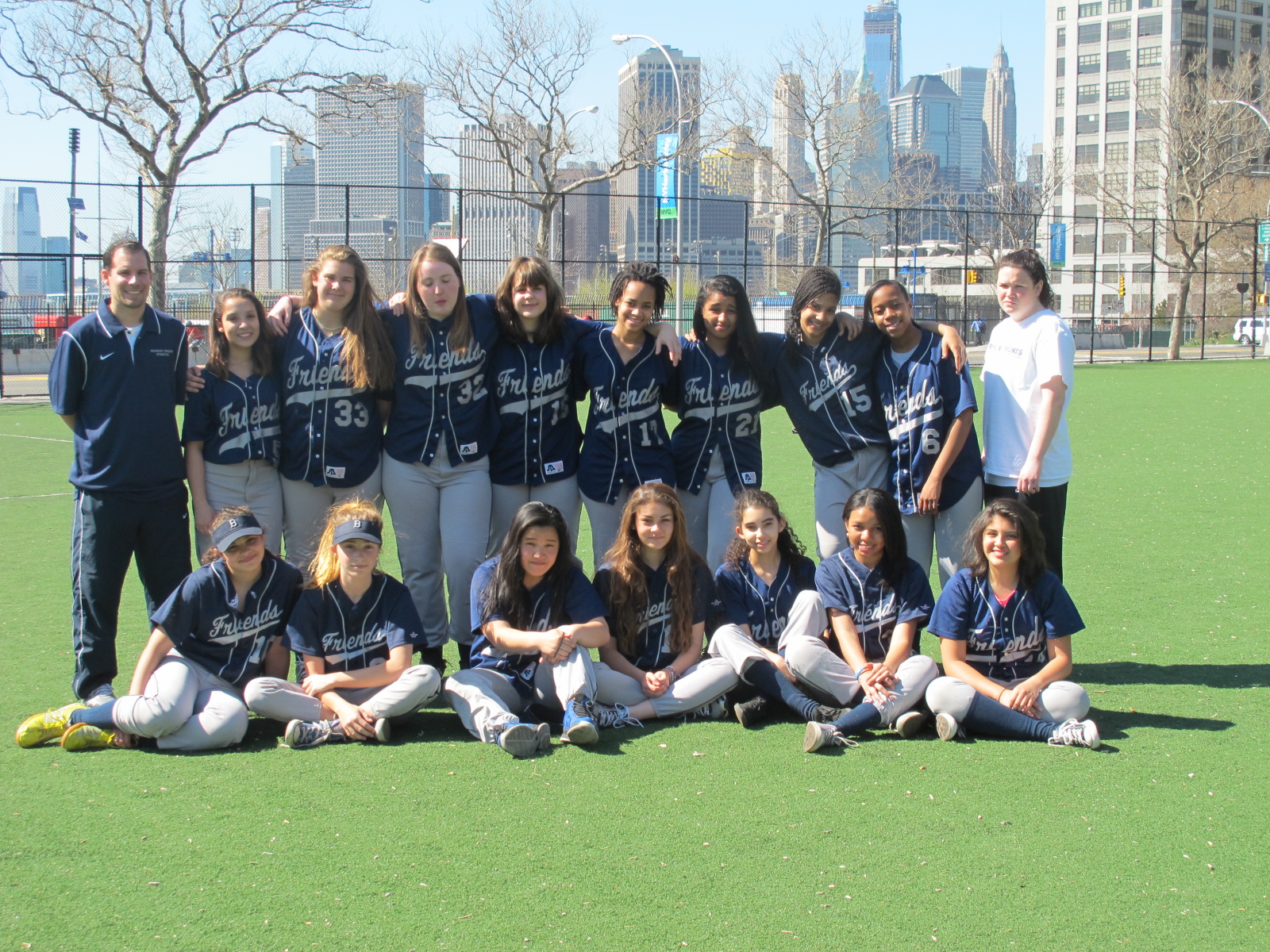 On Monday the BFS Girls Varsity Softball team defeated Bay Ridge Prep 21-13 in the ISAL Semifinals at Van Voorhies Field to advance to the championship game on Wednesday.  The team was missing a third of its players.  A couple of the missing players were regular position players.  The team had to make adjustments as usual.  On a chilly Monday down at the field the team got off to a slow start as the first two Bay Ridge Prep batters walked.  BFS struggled threw the top of the first giving up five runs (the same thing happened last time we played them).  BFS came up and managed to get their first four batters to reach base with hits and a walk.  After scoring a couple runs and picking up their second out of the inning BFS decided to try to take things into their own hands and sent Julia B. from third in attempt to steal home and steal a much needed run, it worked as they caught Bay Ridge Prep off guard.  They tried it again, but this time Julia G. was cut down at the plate even though she slid under the tag.  BFS was down 5-3 after one inning of play.  BRP picked up two more runs in the top of the second inning and BFS found themselves down 7-3 going into the bottom half of the inning.  Christeline V. led off the inning with a very important walk.  The next batter made out but advanced Christeline to second.  Daisy F. picked up another important walk and BFS now had the top of the order coming up.  Taty R., Sarah M., Julia B., Julia G., and Sophie A. had a hit parade going as they drove in six runs, then Ariel G. walked and Airenakhue O. followed with an RBI single for the seventh BFS run of the inning.  BFS was now leading 10-7 as they took the field in the third inning.  Taty R. settled down on the hill as the team settled down in the field.  She only faced four BRP batters during the third inning, striking out two of them.  BFS kept up the offensive attack as they had a another parade of base runners.  The first batter reached on an error and then Taty R. singled, Sarah M. singled, Julia B. walked, Julia G. blasted a base clearing triple, and in between a couple outs Anna E. and Kariesha picked up hits.  BFS scored six more runs to take a 16-7 lead.  No lead is ever big enough.  BRP got back three runs in the top of the fourth and closed the gap to six at 16-10.  BFS once again had their top of the order coming to bat, so things looked good.  But after a lead off out, a walk, a nice play by BRP’s shortstop, and a BFS runner getting cut down on a nice play, BFS only added one more run to make it 17-10 going into the fifth inning.  Taty came up big as she struckout BRP’s first batter and then BFS made two plays in the infield to retire BRP one, two, three on seven total pitches.  BFS had the bases loaded in the bottom of the fifth but couldn’t add to their lead as all three of their outs were strikeouts and they didn’t advance any runners.  BFS ran into some trouble during the sixth inning giving up three more runs.  Kariesha M. made a very nice catch for an out on a BRP line drive to help them get out of that inning.  BFS found themselves up 17-13 going into the bottom of the sixth inning.  Once again, BFS had their top of the order coming to the plate.  Taty started the inning off with a line drive single.  Sarah M. followed up with a walk.  Julia B. hit a blast for a 2 RBI double.  Julia G. picked up a hit (she finished 5 for 5 with 2 doubles, 1 triple, and 6 RBI’s) and Sophie walked.  The four runs scored that inning gave BFS some insurance going into the final inning.  Up 21-13 and facing the bottom three in BRP’s line up, BFS just needed three more outs to advance in the playoffs.  The ever important first out came on a grounder to second where Sophie cleanly played it and threw over to first.  Sophie had not played second base all season, but when coach asked her on the bus ride over if she could play it, she calmly responded “I can do anything”.  That confident response enabled coach to fill the whole at second today.  The next ball was also hit to Sophie at second and she once again cleanly fielded the ball and threw it over to first base where Julia B. stepped up to cover that position since we were not only missing our second base woman, but also our first base woman.   BFS was now one out away from heading back to the ISAL Championship Game after last years thrilling 10-6 semifinal upset win over BWL at the Great Lawn.  Taty revved up and fired three strikes to catcher Anna. E. for her seventh srikeout of the game and the complete game victory.  The team took care of business today and will practice tomorrow as they gear up for Wednesdays ISAL Championship Game against undefeated league opponent LREI who boasts a great ninth grade pitcher who really brings it.  First pitch is scheduled for 3:30pm at Van Voorhies Field.  We hope you can make it.  Thanks to all the fans that came out to support us today and during the season.  Blue Pride!! Championship Bound!! 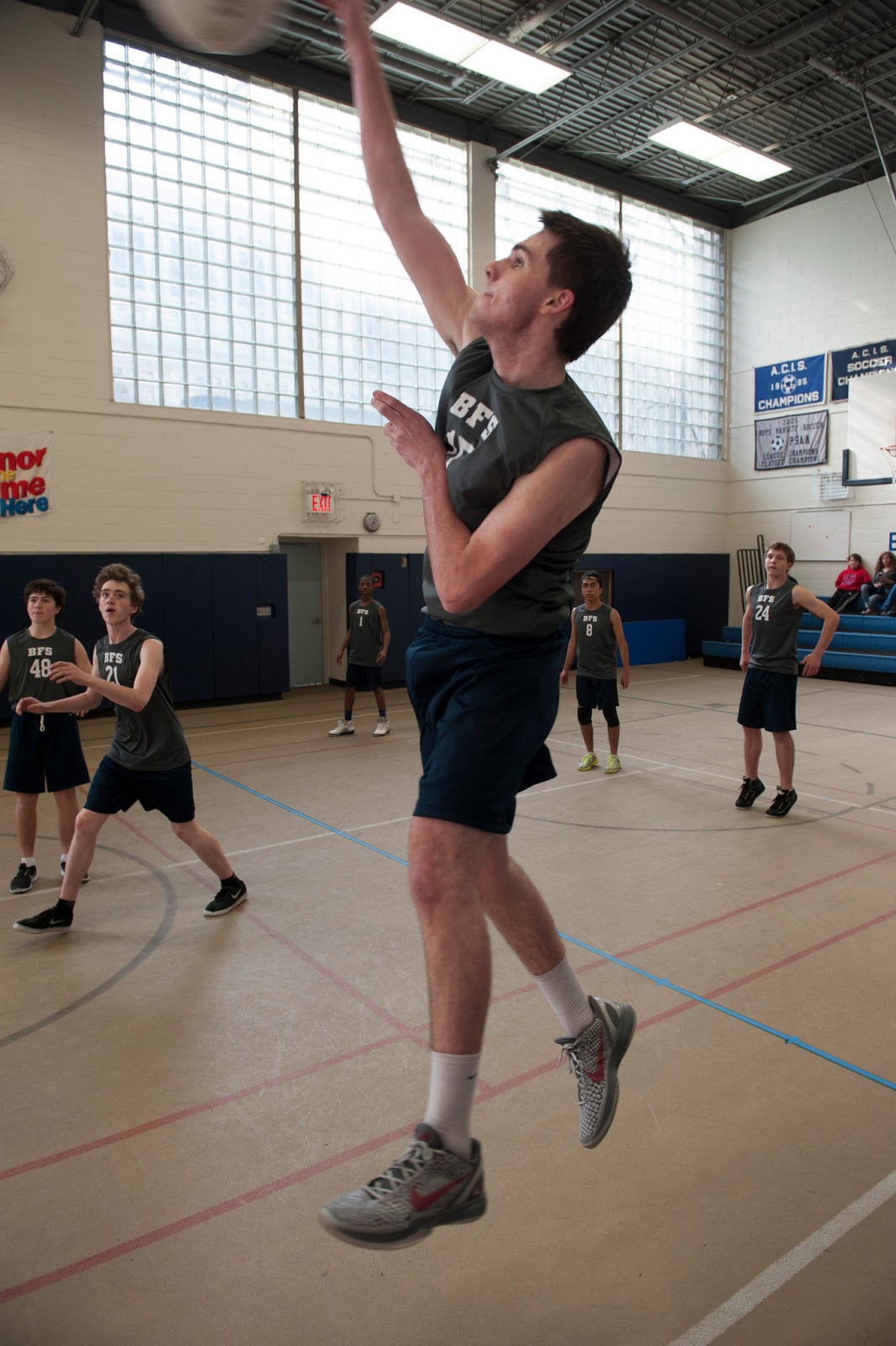 The BFS Boys Volleyball team defeated Berkeley Carroll 3-0 (25-10, 25-15, 25-10) in their final home game of the season.  The team used the match to measured how much they have
improved over the course of the season.  BC started the first set with the lead, then BFS caught up and never
looked back.  After a shaky start, BFS took over and dominated the whole match, wining in three straight sets.  Griffin
E. controlled the transition beautifully dishing 19 assists.  Thomas C. once again had a dominating
overall performance, accumulating 14 kills, 9 digs, 6 aces, and 2 blocks.  Sebastian J., Nick E., Alex D-L, and Sam M.
completed their last home game as seniors, playing great defense at the net and
on the back row.  The younger
players, Quran D., Tyler V., Juan A., and Kamal G. played very
consistently overall.  The team was
determined to have a strong last home game performance against a neighborhood
team.  They will look to complete their very successful season on a high note this Wednesday on the road in their final game of the year. The BFS MS Boys Baseball team defeated Berkeley Carroll 8-7 in Prospect Park for their second straight win.  Jackson W. took the hill and struck
out eight, including the final batter with bases loaded to end Berkeley Carroll’s rally.  The balanced BFS offensive attack was led by
the big bats of Miles N. and Alex B. in addition to the aggressive base
running of Emmitt S.  This is the first winning streak of the season for
the middle school sluggers.  Blue Pride!!

The BFS US Outdoor Track team participated in the ACIS Championship Meet down at Red Hook.  Our small team of six runners demonstrated immense desire in all the races they competed in. Their participation in the Championships bodes well for the team next year.
The BFS males athletes who competed in the ACIS Championships were Jacob I. and senior Jose U.  Jacob started the day off for the team in the 1600m run.  The race equates to almost exactly a mile.  The top runners in the league toed the line and at the gun they set off on a blistering pace.  Jacob had a decision to make, he could stick his nose into the battle or run at a pace in his comfort zone.  Jacob’s competitive instinct took over and he went with the pack.
In running vernacular it is called a adverse pace: A pace which will only serve to bring on early
exhaustion and pain. Yet, exploring new horizons also stretches one’s realm of capabilities.
Jacob came through the first lap ten seconds faster than he had run the first laps of his previous
races.  He said it felt comfortable.  The excitement of competition can mask ensuing pain rather
well.  In addition, Jacob was focused and determined.  Nevertheless, the effort of the first lap
began to take its toll and the pack forged ahead as Jacob worked to maintain contact.  Ultimately,
the more experienced runners had their day.  Jacob, however, finished with a two second personal
best which was only achieved because of his willingness and desire to “go for it” and this is all
we can ask of our athletes.  Jose U. went for it in the 400m.  This shorter race of one lap around the track can be as taxing as the 1600m. Jose came home fourth in his heat. It was the close to a good day for Jose who earlier in the day secured an internship with a big time fashion designer.
The young ladies of BFS had Elinor H. competing in the 400m and Maya K., Giovanna
M. and Mali A. joining her in the 4x400m relay.  Elinor also finished fourth in her heat.  Her time was almost exactly the same time she has run in three previous races.  Next year she will break through this seemingly impenetrable barrier. The relay team ran in special section against a boys team from Friends Academy.  The girls were inspired and the boys were motivated.  Such a setting drove both teams to compete at their highest level.  In the end, the girls could not over take the boys but they improved their best time from earlier in the year by one second.

The track season ended on a high note.  The team gelled and became a close knit group which enjoyed their runs, trainings, core work, and competitions.  The group always knew there would be work but also came realize a bunch of fun also came with membership on the team. 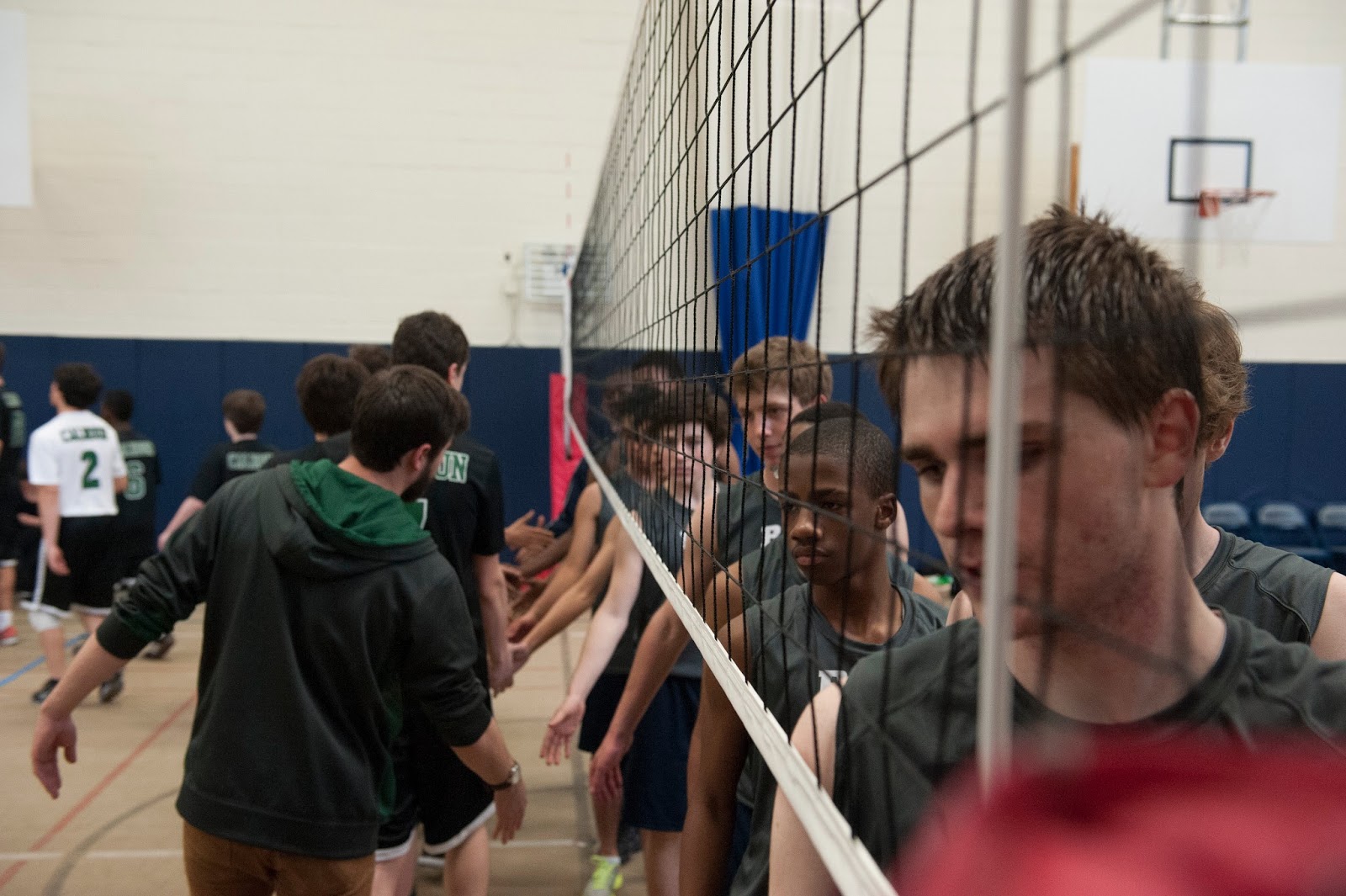 On Wednesday the BFS Boys Varsity Volleyball team defeated Evangel Christian on the road 3-0 (25-14, 25-14, 25-19) in its final game of the season.  And what a season they had.  This was their tenth victory with only three defeates.  The team represented BFS with lots of Pride.  They dominated the first two
sets, winning 25-14, 25-14, then
they lost their focus on the third set, allowing ECHS to tie the game at 14-14;
after
a timeout, they re-focused, and played with more consistency, putting the
pressure back
on ECHS.  Both Griffin E. and Lucas
M. led the way with the serve, and Thomas C. controlled the net with his
offense.  The team ended up winning the
third set 25-19.  It was a great
test for our young team, who showed great growth, determination, and
will to
improve in each and every match.  Thomas
finished the game with 23 kills, 10 digs, and two aces.  Griffin set a great
game, finishing with 26 assists.  Lucas added 8 kills, 8 digs, and 3
aces.  Nick E., Quran D., Sam M., Alex D-L,
Tyler V., and Kamal G. competed and contributing with
their
defense, as well as their consistent overall play. 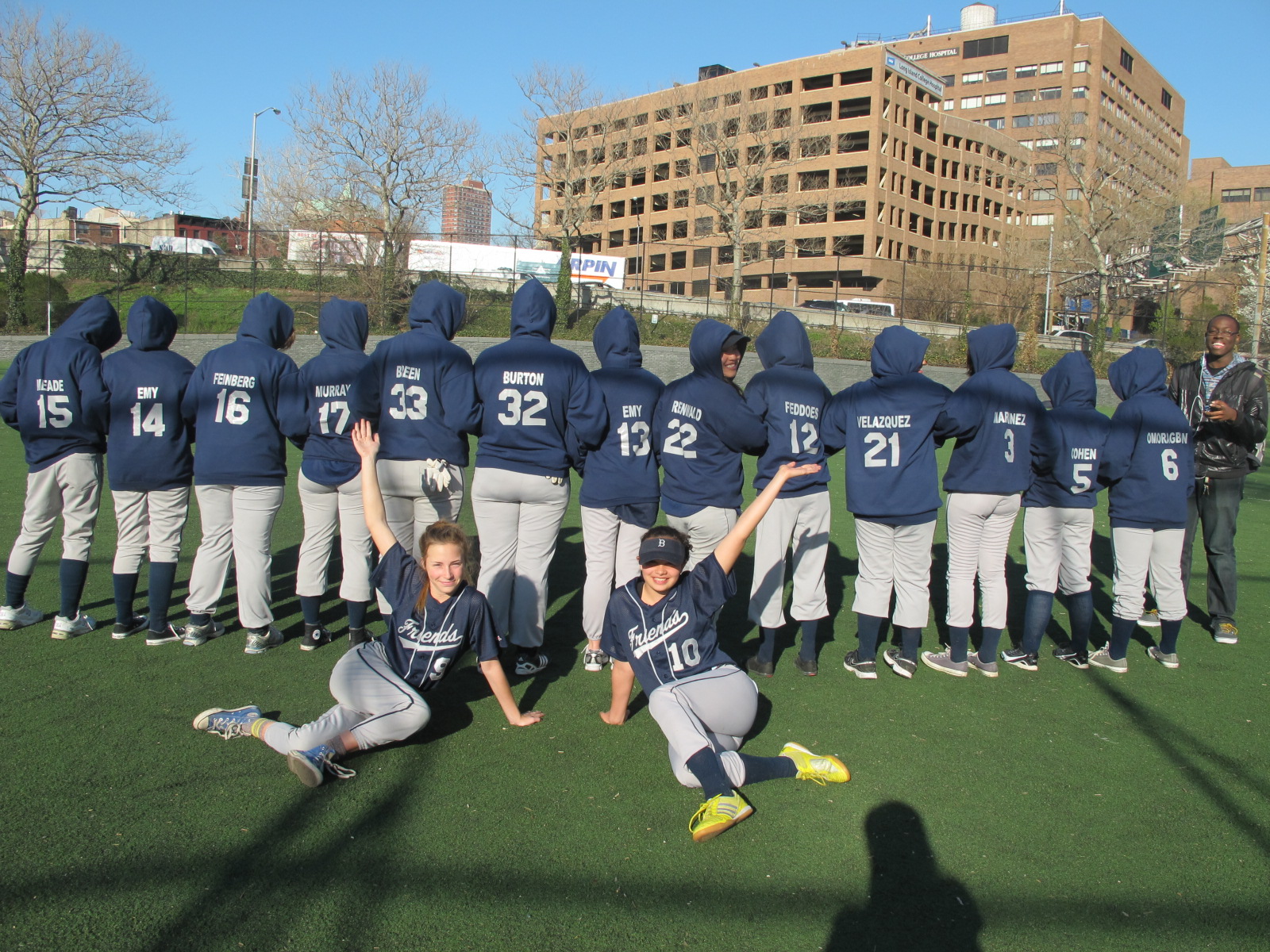