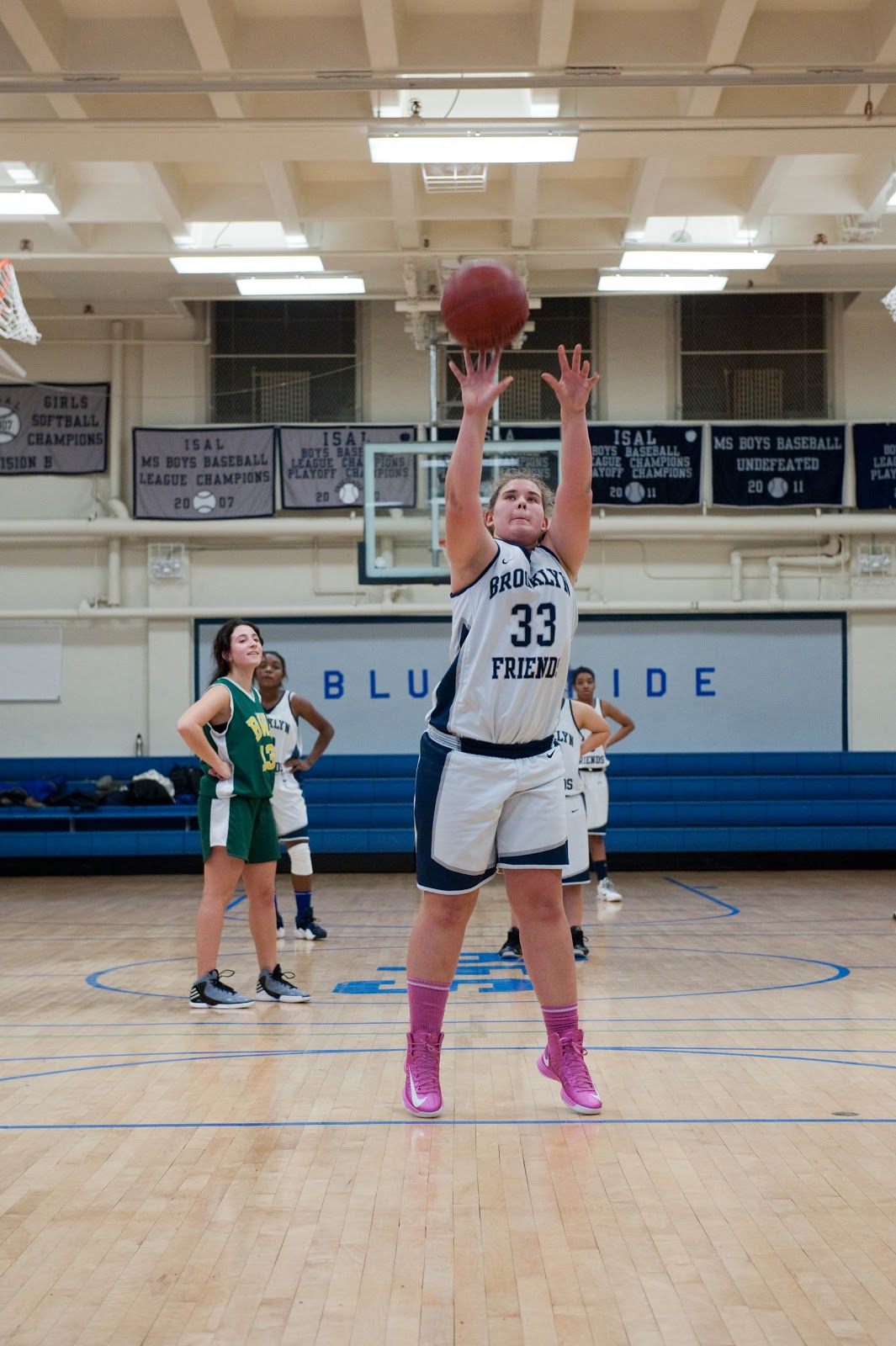 On Monday the BFS Girls Varsity Basketball team continued their winning ways by coming from behind in the last minute to defeat LFNY 36-31 in the lower gym.  The game was close throughout.  Neither team really took a commanding lead.  It was a back and forth game.  BFS led 10-8 after one quarter and led 16-15 at the halftime break.  During the half BFS discussed ways to try to slow down LFNY’s point/forward, while also talking about strategies to keep LFNY’s center off the glass and away from the basket down low.  BFS took a 28-25 lead into the final quarter of play.  BFS was off its game from the start, mainly on the offensive end.  Their struggles continued to show in the fourth quarter as they missed some more layups.  BFS played solid defense in the fourth quarter but found themselves down three points with less than a minute to play.  BFS finally woke up as they were sparked by numerous steals to get things started in the right direction.  Senior Janna J. made a layup to pull BFS within a single point.  Then senior Herron H. came up with another important steal as BFS took the lead 32-31.  After a stop on defense BFS called time out with :32.4 remaining and a one point lead.  The team ran an inbounds play and patiently moved the ball around while taking precious time off the clock.  Junior point guard Julia G. found sophomore Julia B. under the basket, her pass was on the money and the sophomore finished the play to give BFS a 34-31 lead with :13.9 remaining.  BFS was not going to stop applying pressure now that they finally awoke, senior Janna J. finished things off with her third layup of the quarter to give BFS the thrilling 36-31 come from behind league victory.  BFS improved to 8-3 overall and 5-2 in league play.  Janna J. had an overall off game, but was still able to manager 16 total points (she is approaching 750 total points for her Varsity Career), including 6 very important points off layups during the final minute of play.  BFS had not scored during the final quarter until that exciting last minute of action.  Sophomore Julia B. had a very nice overall game with 10 points.  Junior Julia G. chipped in with 8 points, including two three pointers.  Seniors Danielle E. and Sidney A. played well for BFS.  Herron only had one basket, but her overall play and effort helped secure the victory for BFS.  No time to really enjoy this victory as BFS as back at it gearing up for another tough league game on Wednesday at the new Basketball City Facility.  Blue Pride!! 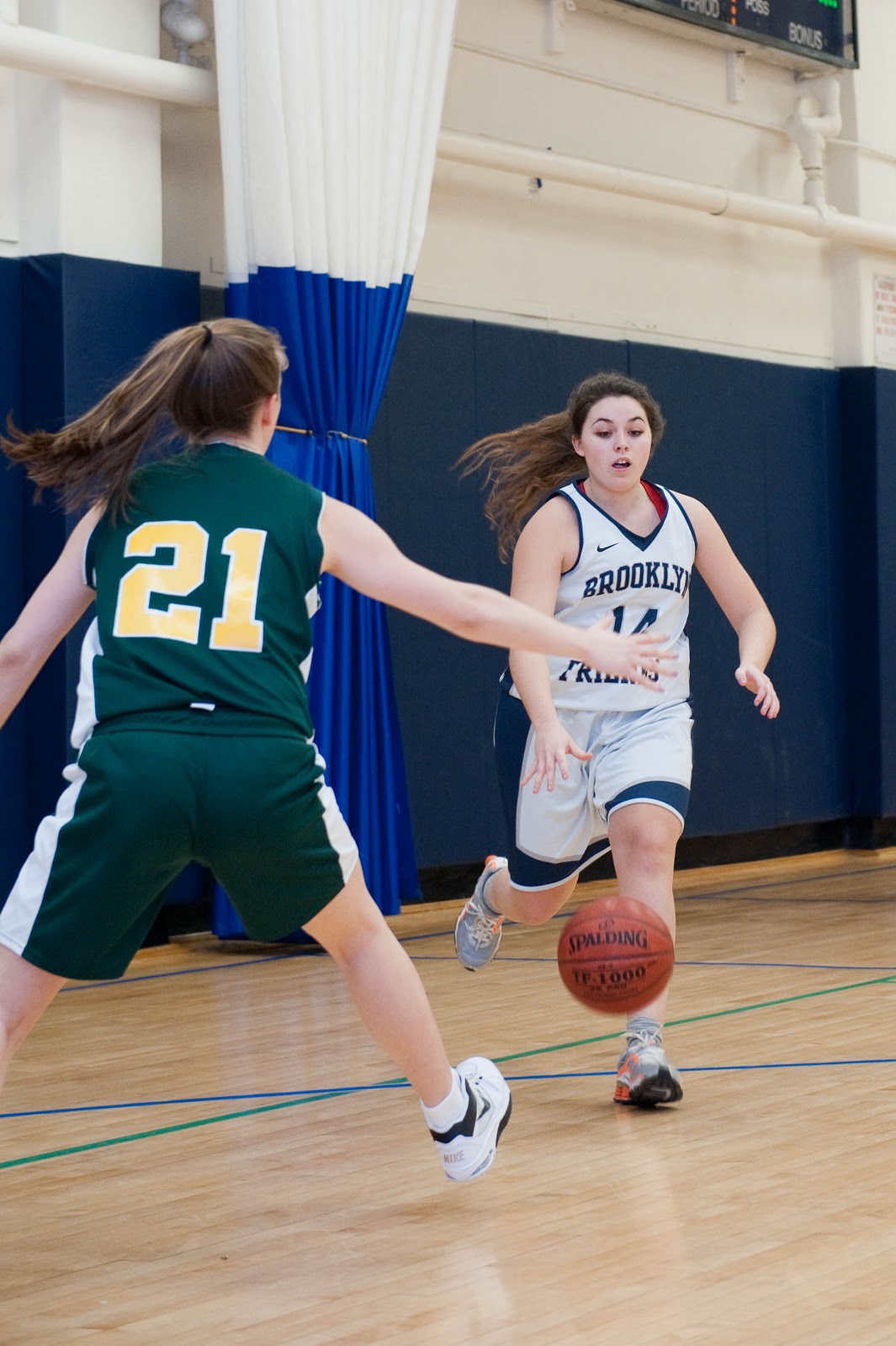 On Wednesday the BFS Girls Varsity Basketball team picked up their second win of the week as they defeated BWL 30-28 on the road at basketball city.  The team arrived at the Manhattan basketball facility with only seven players, two were home sick.  BFS was able to get off to a pretty good start finding themselves up 7-4 after one quarter of play.  BFS had to make constant adjustments throughout the game to deal with injuries and players who were not feeling 100%.  At halftime the game was tied 12-12.  The second half started well, but one of the BWL guards found her stroke and was able to knock down a few jumpers and score 6 points for the quarter.  BWL found itself with a 20-17 lead after three quarters of play.  The fourth quarter belonged to BFS as it turned up the defense and made some more adjustments on that end of the court.  Good defense and solid rebo8unding created some more offensive opportunities, which led to some much needed scoring.  Senior Janna J. started to aggressively take the ball to the basket while sophomore Julia B. cleaned things up on the offensive boards.  BFS opened up a 28-21 lead before letting BWL back it the game with some costly turnovers and bad decisions.  BWL knocked down a three pointer from the top of the key to close the game to 30-28 with seconds remaining.  BFS called timeout to set up an inbound play which worked.  Janna  J. ended up getting fouled with 2 seconds left and she went to the foul line with a chance to stretch the lead with a one and one situation.  She ended up missing the front end of the one and one and BWL called a quick timeout.  They had one second left to try to score from the length of the court.  The horn sounded and BFS came out victorious again.  The team improved to 9-3, 6-2 in ISAL League play.  Janna had 11 points for BFS, which now gives her 747 for her three year varsity career.  Sophomore Julia B. came up big for BFS as she scored a game high 12 points (6 in each half).  Senior Herron H. and junior Julia G. each knocked down very important three pointers during the game.  The team will enjoy a much needed and well deserved off day on Thursday before getting back to work on Friday as they gear up for next weeks three league games.  Blue Pride!!

The BFS MS Boys Basketball team continued their winning ways with a 30-17 win over Rudolph Steiner at Pace University.  The players were very excited to take the court at a college facility.  The team was once again led offensively by eighth grader Philip C. who scored 11 points in just 12 minutes of action.  Seventh grader Matthew R. scored 5 points off the bench, eighth graders Charlie S. scored and Noah R. scored 4 points, while eighth graders Sam F., Rocco B., and Isaac H. all chipped in with a basket each.  The team improved to 5-2 overall and 3-0 in ISAL League.  Come out and cheer them on at their next game.  Blue Pride!!

On Thursday the BFS MS Girls Basketball team defeated Dwight 21-16 at home to continue their winning ways making it four in a row.  The lady panthers were paced by eighth grader Halima M. who had a game high 12 points.  Seventh grader Issa R. added 7 points, including a clutch three-point bank shot in the 3rd quarter.  Eighth grader Hannah B. chipped in with a basket to complete the scoring for BFS.  The lady panthers did get off to a slow slow start in the first half, but came back strong starting the second half outscoring Dwight 9-2 during the third quarter. The girls will be going for five wins in a row next Thursday as they take on another league opponent.  Way to go team!!

The BFS MS Boys Basketball team won their fifth straight today against Dwight 32-16 in the lower gym.  Just prior to the game the team watched and supported the MS Girls team as they defeated Dwight’s to win their fourth straight. The MS basketball teams are on a roll.  The boys were once again led by team scoring leader eighth grader Philip C. who had a game high 13 points.  Team captain Charlie S. scored 7 points, and fellow eighth grader Rocco B. added 6 points, and for the second straight game Noah R. chipped in with 4 points, and Isaac H. a basket.  For the season however the story has been defense.  They allowed just 16 total points to their league opponent.  The boys have now held their opponent to 17 or less points for the fourth time in nine games.  With the win the boys improved to an impressive 6-2 overall.  The BFS MS Basketball Team shave now compiled an extremely impressive 10-3 overall record.  Don’t miss the winning action.  Be sure to get catch a game.  Blue Pride!!

The BFS Boys JV Basketball team defeated Dwight 50-35 in the lower gym.  BFS took a 22-16 lead into the halftime break.  The team opened things up in third quarter outscoring their opponent 12-5.  Freshman guard Quran D. led the way for BFS pouring in 29 points, including four three pointers.  Fellow freshman and backcourt teammate Anthony B. scored 10 of his 13 during the second half run.  The Panthers improved their overall record to 8-3 (5-3 in league play).  Blue Pride!!