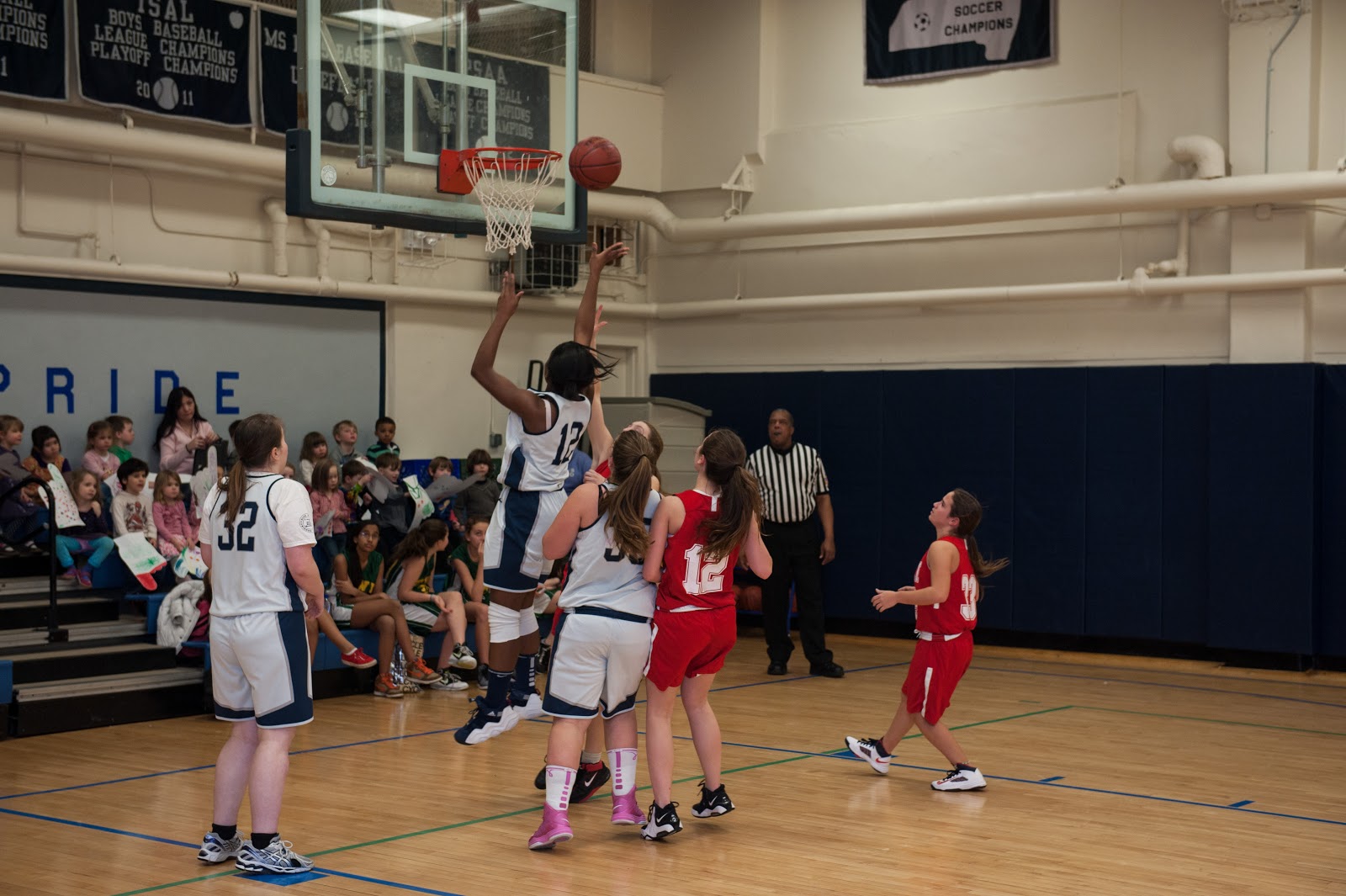 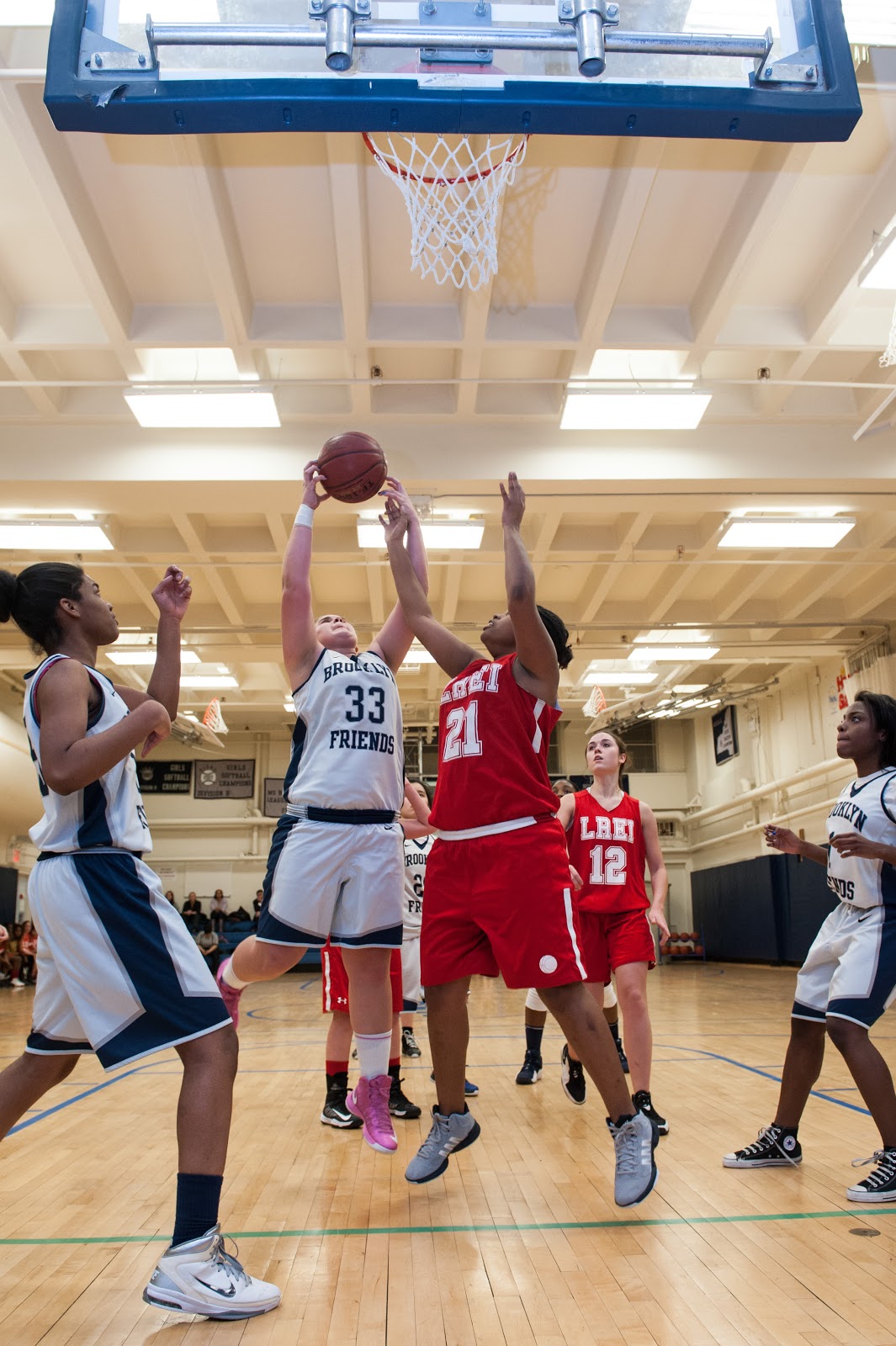 On Monday in an ISAL Semifinal game, the BFS Girls Varsity Basketball team defeated LREI 47-29  in the lower gym in front of a great home crowd.  Thanks to everyone who came out to support the team!!  With the win the team improved to 17-5 overall and 14-3 in league play.  The team will take on York Prep in the ISAL Championship Game tomorrow at Pace University at 4:00pm.  BFS got off to a very strong start led by senior Janna J.  BFS played great defense which created great offense during the first quarter.  BFS found themselves up 20-4 after one quarter of play.  Janna had 10 first quarter points, while junior Julia G. knocked down two impressive three pointers to giver her 6 points in the quarter (8 for the game), and sophomore Julia B. added two baskets and 4 more points for BFS.  They never looked back.  They maintained the effort on the defense end and their shots continued to fall during the second quarter.  BFS scored nine more points, all coming from Janna as they were up 29-9 at the halftime break.  Senior Herron H. went down with an ankle injury just before the half and sat out the rest of the game.  A slow start to the third quarter didn’t stop BFS from out scoring their opponent 9-4 during the third quarter and opening up a 38-14 lead.  The bench came to play as they were asked to step up on the defense end.  BFS got everyone involved as they changed up the defense a couple of times to keep LREI and their players off their game.  Offensively, Janna continued to shine as she scored a game high 29 points to give her 968 going into the big game tomorrow.  Her defense created offense as she managed 11 steals, while grabbing 11 rebounds.  A triple double in a playoff game, very impressive.  Janna’s overall effort, Julia G.’s point guard skills and early three pointers, Julia B.’s defense, rebounding, eight points, and overall skill, Herron H.’s senior leadership and gutsy performance, senior Danielle E.’s defense, shot blocking, and overall play, junior Chloe B.’s quality minutes, senior HY’s spark and late basket, and of course seniors Sidney A.s’ and Rayvin T.’s great defense and aggressive attitude all contributed to the victory.  Thanks also goes out to our great coaches Lydia and SHelby, as well as our special motivational guests from last week Sue Wicks and Katja Bavendam.  See you at the Championship Game!!  Blue Pride!! 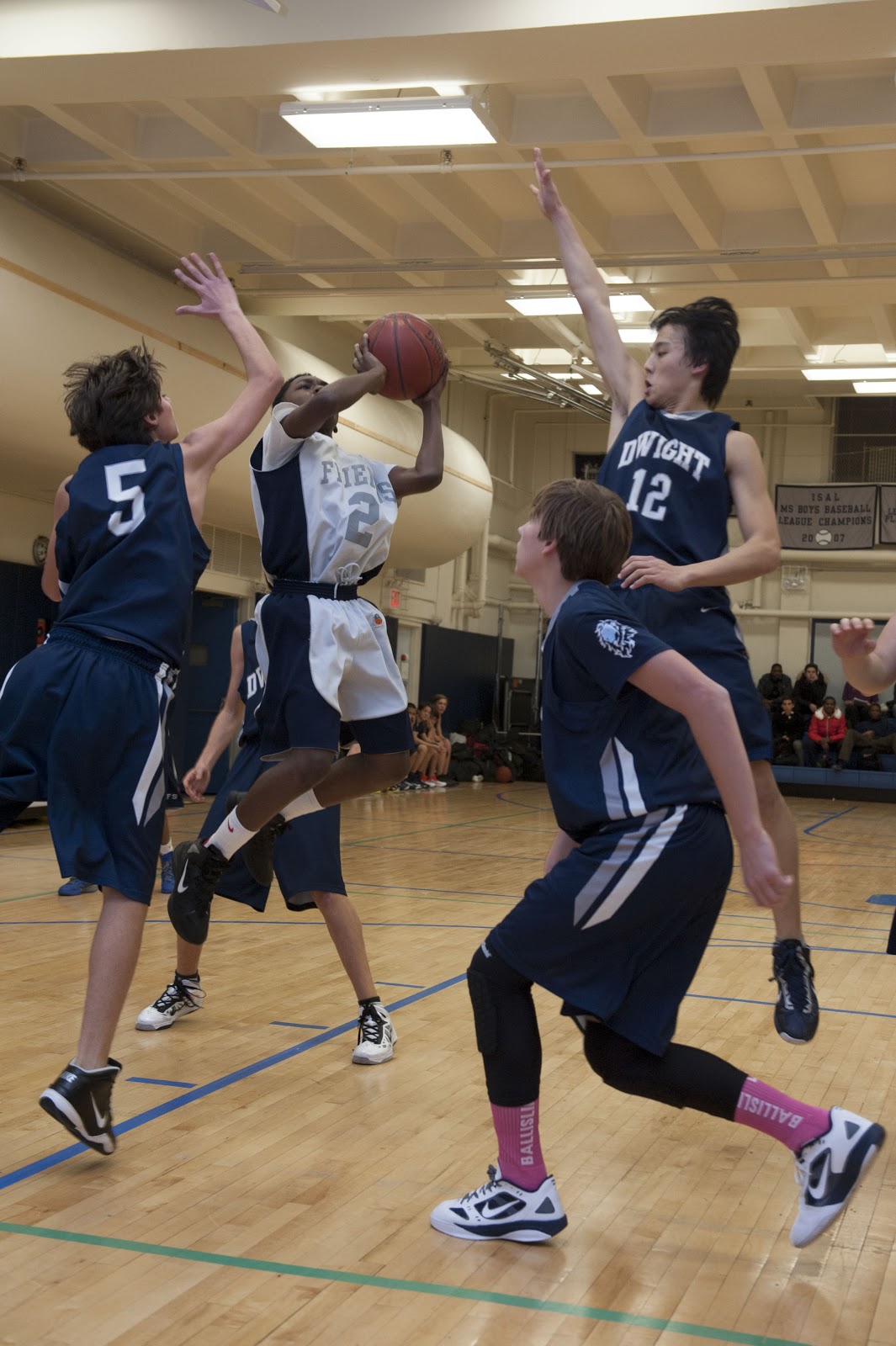 The BFS Boys JV Basketball team won a barn burner this evening, beating number one team in the ACIS League Berkley Carroll 70-65 in over time.  BFS trailed by as many as 12 points.  Freshman Quran D., who scored 11 points, forced overtime by hitting a three pointer in the closing seconds of regulation.  The Panthers tight defense held Berkley Carroll to just three points during the over time period.  Freshman Anthony B. led the way with 27 points.  Sophomore Adam W., who fouled out with five minutes left in regulation added 17 points to the scorebook for BFS.  The team improved to 13-4 overall.  This was a defining win for BFS with 2 games remaining until the playoffs.  We hope to see you in the lower gym on Wednesday and/or Friday.  Blue Pride!! 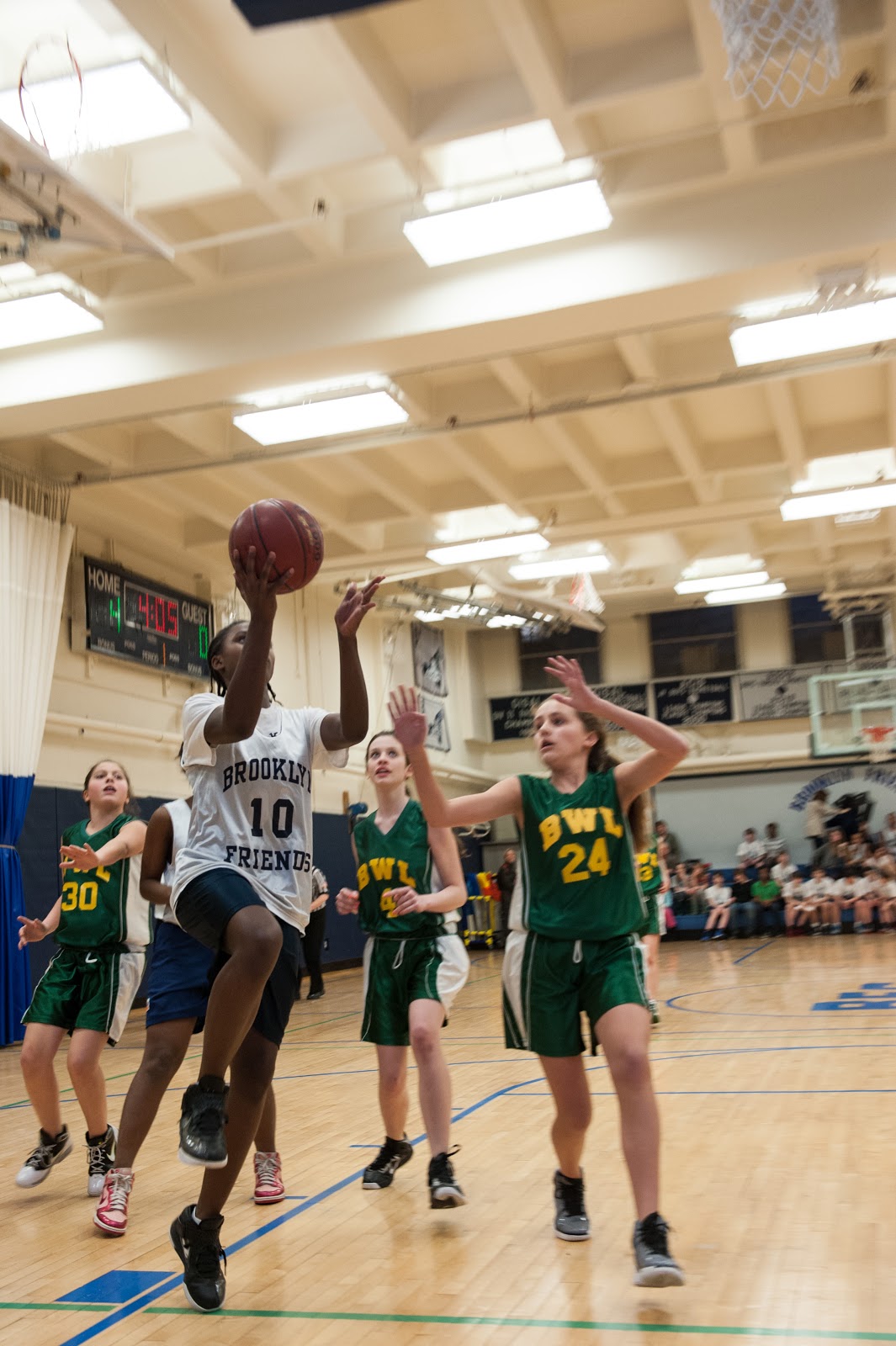 The BFS MS Girls Basketball team ended one of their best season on a three game winning streak with a 22-8 win over league opponent BWL.  The lady panthers started off hot with a 9-2 first quarter lead and never looked back after that.  Solid defense and timely offense equals victory.  It was a real team effort.  The middle school girls basketball team not only played great today but all year ending the season with the best record ever at 7-3.  What a great season girls!!  Way to go…Blue Pride!! 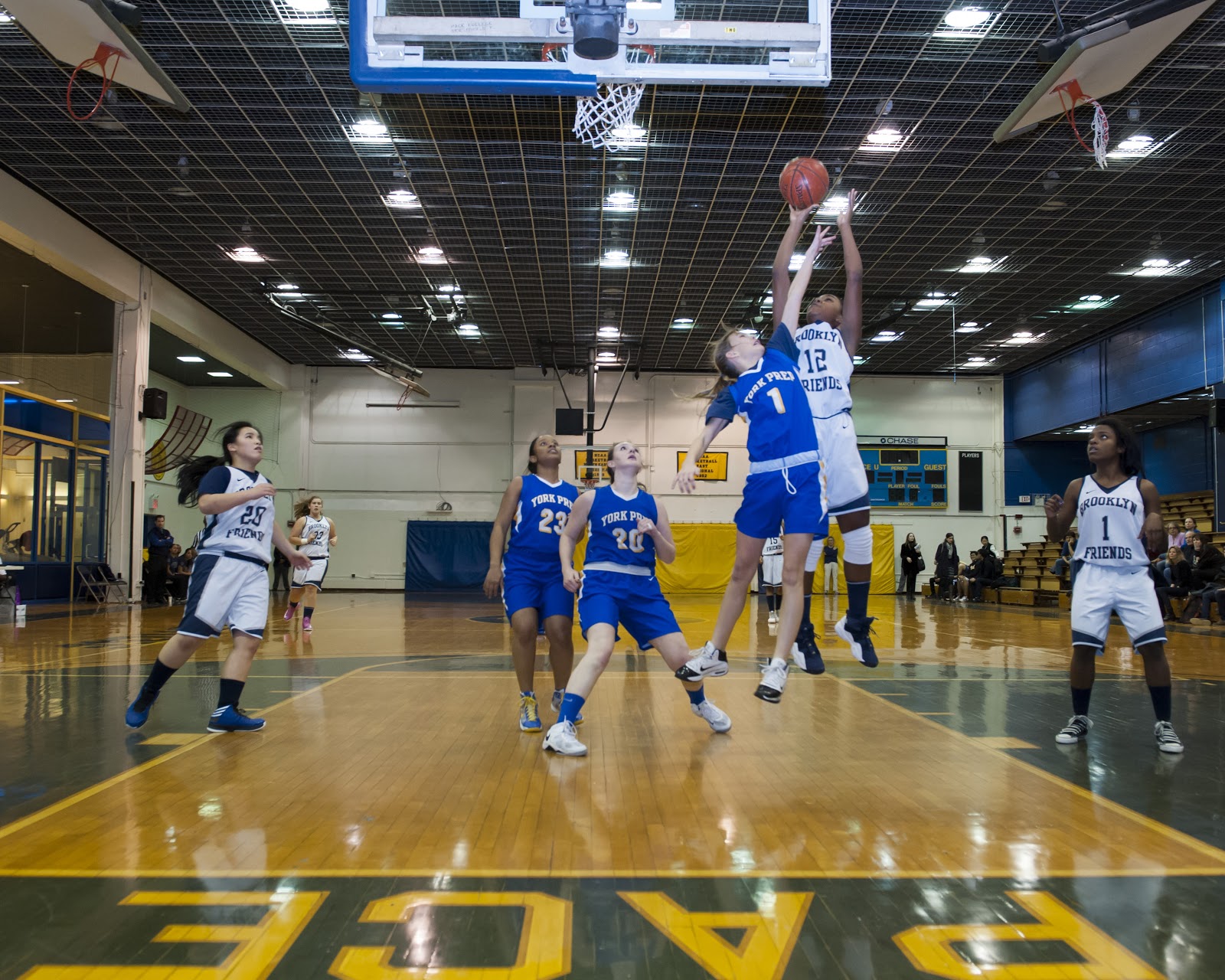 On Tuesday in the ISAL Championship Game, the BFS Girls Varsity Basketball team lost to York Prep 30-27 at Pace University.  Thanks to the players, coaches, and everyone who supported the team during the season.  It was an interesting game.  Both teams came out slow on the college court.  BFS missed out on a couple early opportunities, while their opponent was also having trouble putting the ball in the basket.  Finally after almost four minutes of play York made a free throw to give them the 1-0 lead.  BFS played solid defense throughout the first quarter keeping their opponents in front of them, especially their star point guard who was held scoreless during the first quarter.  BFS finally got on the board as they picked it up on the offensive end.  They started taking advantage of York’s pressure defense and attacking them.  Senior Janna J. who had led the team offensively during the whole season managed six first quarter points.  York continued to miss jumps shot and BFS found themselves up 6-3 against the top seed after one quarter of play.  BFS had the momentum as they got off to a good start during the second quarter.  They continued to play solid defense to start the quarter and York continued to struggle on the offensive end missing jump shots.  Janna managed eight more points and junior guard Julia G. knocked down a three pointer to give BFS an impressive 17-3 lead.  But that lead was not enough for BFS.  York started to make shots, their star player was now feeling it, they adjusted their defense to sit back and wait for BFS, and BFS could not find the bottom of the net.  It was 17-5, then 17-7, then 17-10, BFS had a good chance to score on a driving lay-up before the second quarter buzzer sounded but they came up empty.  BFS now found themselves up 17-10, but it felt like we were down.  We had two choices at that point, step up and regain the momentum or continue to play flat and let them out work us on the court.  We chose the latter.  BFS continued to struggle on the offense end as shots were not falling, especially some three pointers.  We could not grab an offense rebound.  York out rebounded us on both ends of the court. 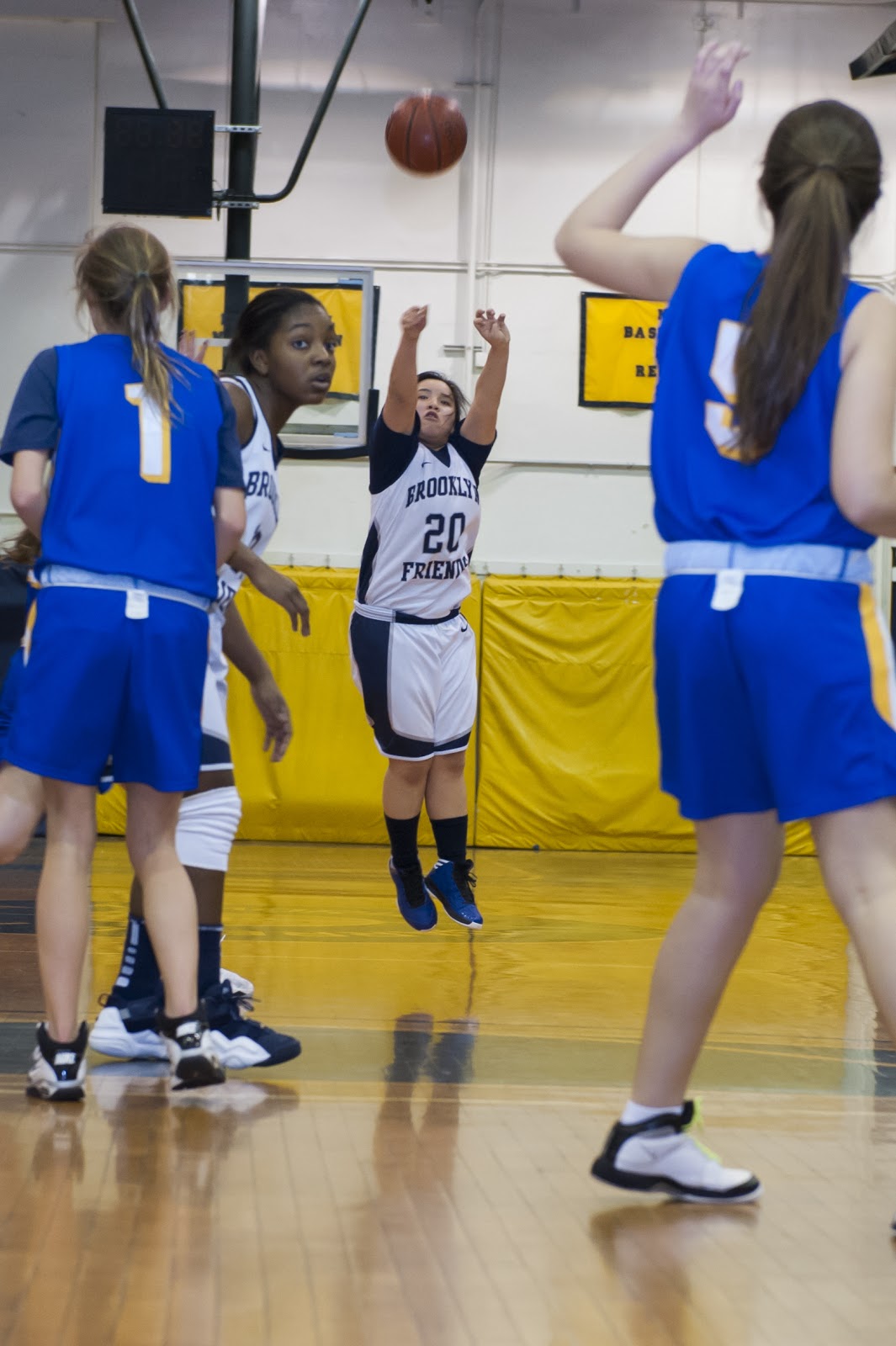 When the score was 19-16 still in BFS’ favor they called timeout and made the adjustment to have one player shadow York’s star guard.  BFS had trouble with this, as well as with the help defense.  BFS was held to just two points during the important third quarter.  York on the other hand continued to play good basketball as they managed ten points during the quarter, including seven by their star guard, and they were now back up by one point 20-19.  Only down by one point it felt like BFS had already lost.  The whole team was down and out.  It almost felt like that quit and gave up.  BFS found themselves stuck on 20 points as York slowly added to their lead.  With three minutes left and BFS now down 29-20 after York’s impressive 26-3 run, BFS finally got a steal from Janna which led to a driving lay-up (she finished with 21 points and 10 rebounds) and BFS was back in business as they awoke from their two quarter funk.  BFS continued to work on both ends of the court as they now had some life back in them.  They created a couple of turnovers with good defense which led to offensive opportunities.  They were still missing some shots but you could feel a slight shift in the momentum.  Before you knew it BFS was down 29-25 and they had a chance, but time was not on their side.  They got within two points at 29-27 and called a timeout.  A careless possession coming out of the timeout led to a turnover.  Actually the crowd thought it was BFS’ ball on the out of bounds call, but the officials did not see that and the BFS player did not sell the call as she walked away like she knew it was off BFS.  BFS needed a defensive stop, a steal, a break, something.  They didn’t get it this time.  They ended up fouling York who went to the line and made one free throw to give them the 30-27 lead.  BFS now found themselves down three at 30-27 with 10.7 left on the clock.  BFS needed a three point as there was not enough time to get a quick two and foul, and get the ball back on this college court.  BFS struggled all game with three ball.  The coach drew up a play and the girls ran it to perfection and our best three point shooter got her shot from the top of the key.  It was a great look and she took a great shot.  It was right on target and coach thought it was going in, until it back rimmed and bounced out long.  The ball bonuced around a little and was grabbed by both teams.  The possession arrow favored BFS.  The team called its last timeout with 2.3 seconds remaining and another chance to tie the game that they led until the start of the fourth quarter.  Once again the team ran the play well, but Janna didn’t create as much space as she needed with the early fake, she went to the corner and caught the pass from in bounding senior Herron H. who by the way has been injured the last couple games and we really missed her presence on the court, Janna caught the ball and squared up to take the three from the corner when out of nowhere sophomore star guard from York cleanly blocked Janna’s shot.  Somehow Janna remained composed and grabbed the blocked ball out of the air, regrouped, and managed to take another three pointer, which I am not even sure where it landed because this happened right in front of our bench and I watched Janna get hit on the arm during the second attempt and was looking for the officials signal of a foul and hopefully three free throws to be awarded.  That signal and call never came and BFS fell just short of a championship.  Basketball is a team game and to win you need to play well all four quarters or at least the majority of the game.  And we did not do that.  Tough one.  I lost sleep over it, and I hope the girls did too. 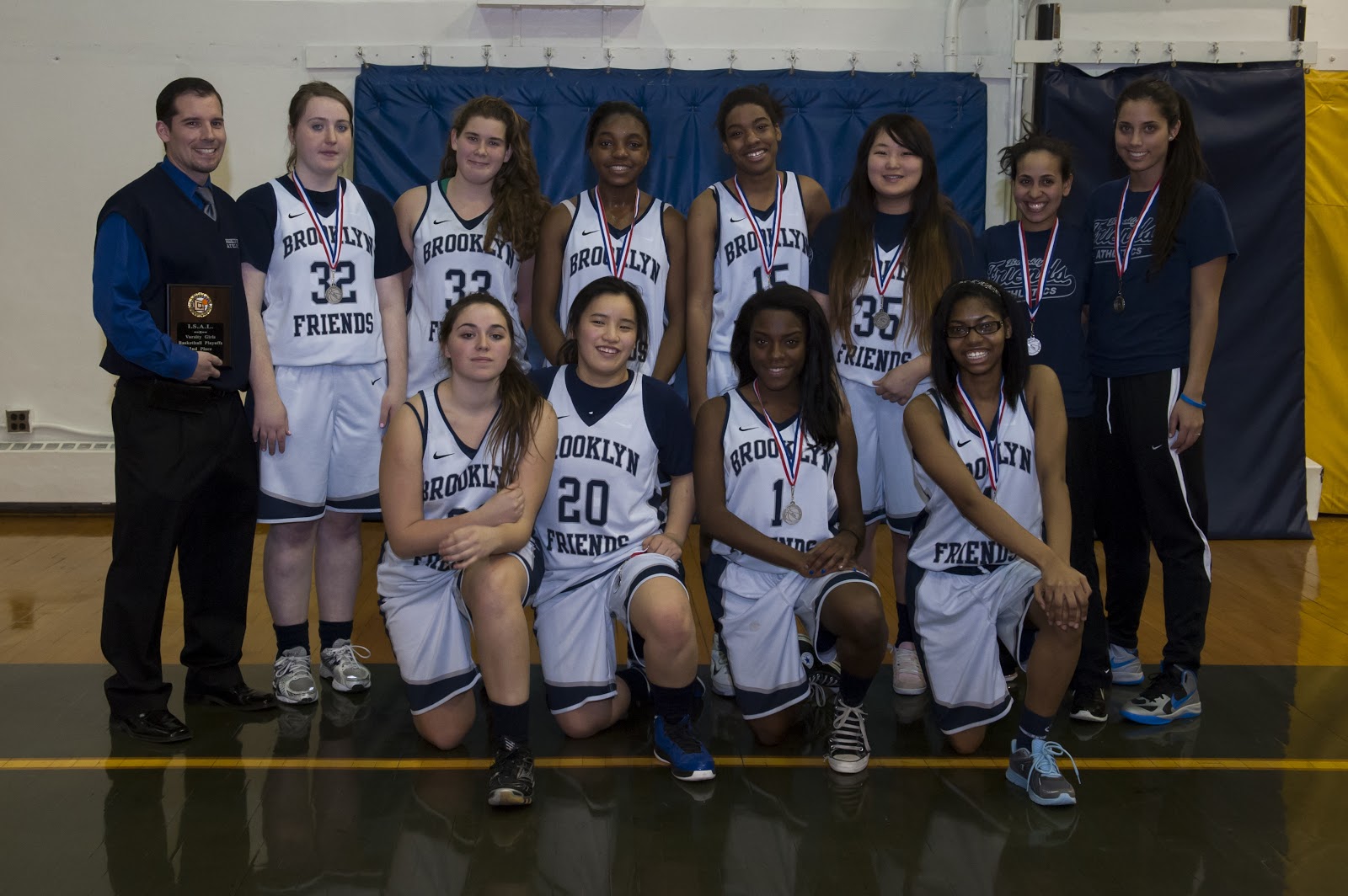 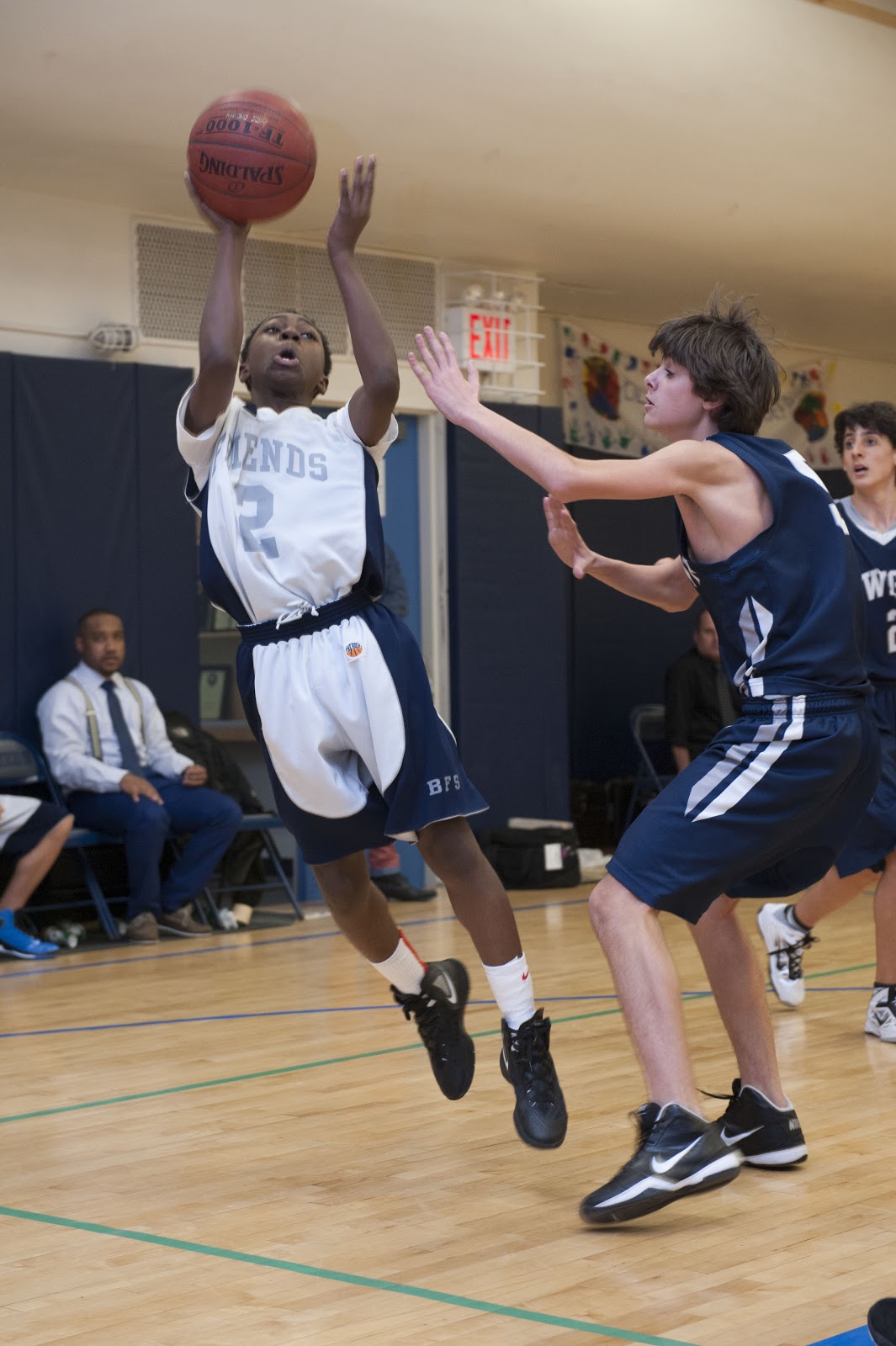 On Wednesday the BFS Boys JV Basketball team defeated SIA with ease, winning their 5th straight game.  Freshman Anthony B. scored 20 points, while fellow freshman and backcourt partner Quran D. wasn’t far behind with 18 points.  BFS went on a 13-3 run during the 2nd quarter and never looked back.  Their high intensity and defensive pressure forced multiple turnovers which led to some easy scores.  The team now boasts a very impressive 14-4 overall record.  They have one more regular season game left this Friday before the ACIS Playoffs next week. 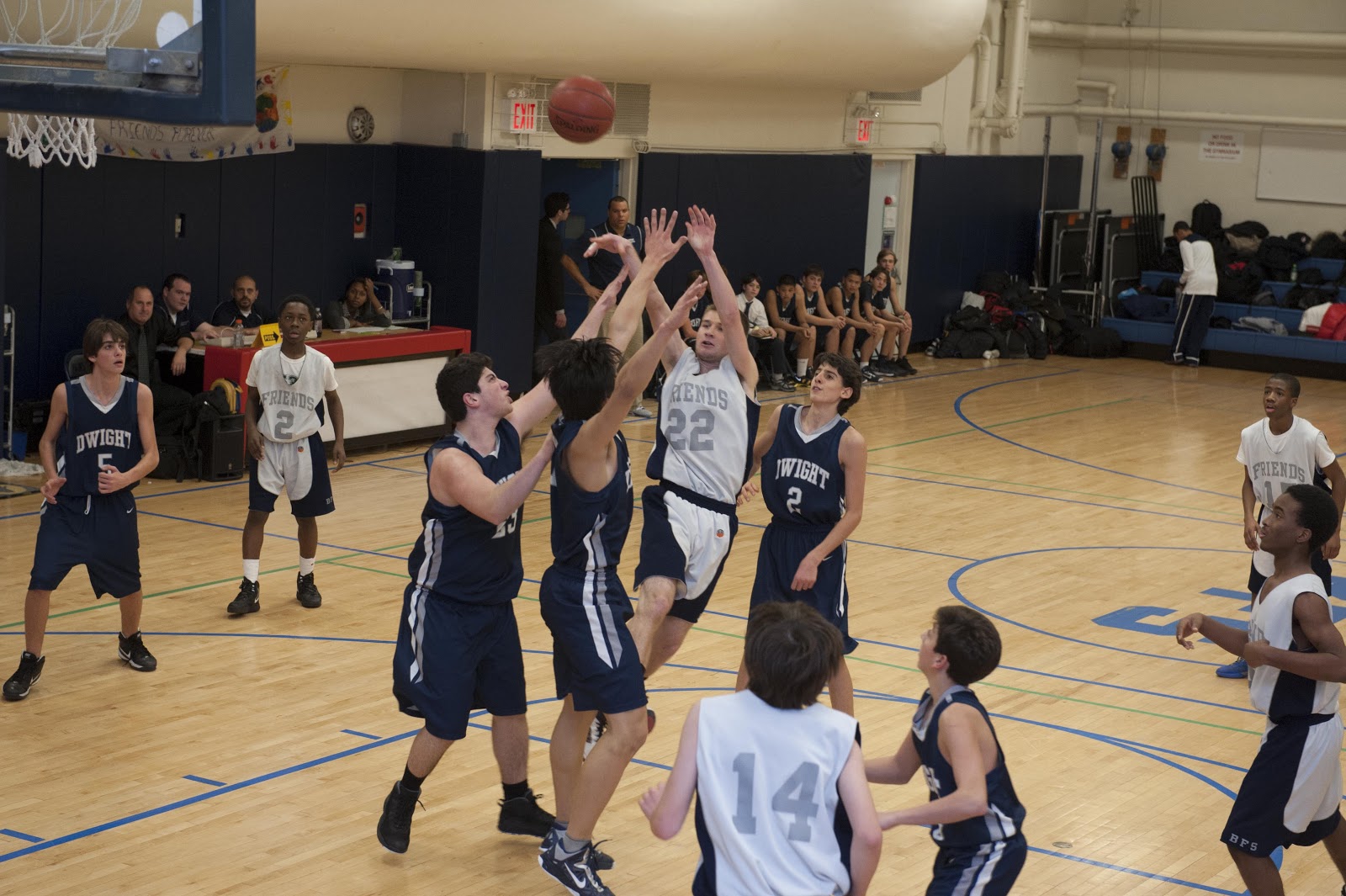 On Friday the BFS Boys JV Basketball team defeated Dwight 54-44 in the lower gym to conclude the regular season.  Brooklyn Friends won their 6th Straight game.  Freshmen Anthony B. and Quran D. each scored 20 points for BFS.  They hit seven combined three pointers.  Sophomore Adam Wells contributed with 12 points. This was his fourth straight game in double figures.  The team will take on SIA in our gym this Thursday in the first round of the ACIS Playoffs.  Blue Pride!!