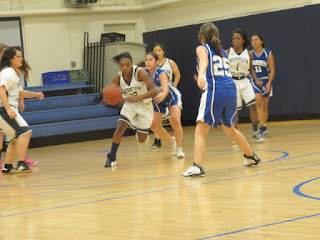 On Tuesday the BFS Girls Varsity Basketball team defeated previously undefeated Birch Wathen Lenox by a score of 33-22 at BFS. The team came out strong against rival ISAL League opponent BWL. These two teams have played some great games over the years. After one quarter of play BFS led 8-5. The team turned things up in the second quarter by making some adjustments on the defensive end which helped to create some easy baskets on the offensive end. Senior sensation Janna J. was able to get her hands in the passing lane, creating numerous steal and fast break opportunities. She finished with nine points in the quarter to go with the six she scored in the first quarter. BFS outscored BWL 11-1 to open up a 19-6 lead at the half. BFS struggled in the third quarter, but managed to score six more points (including four more by Janna), while giving up eight points to BWL. As BFS continued to struggle in the final quarter the team had to make some adjustments and really slow the game down. BWL managed eight more points and got within nine points, but BFS held tight and controlled the ball for the most part. BFS only scored one two field goal and a lone free throw until the waning moments when junior guard Julia G. finally knocked down a three pointer for BFS to finish off their opponent. Janna finished with a game high 23 points, 4 rebounds, a block and season high 10 steals. Julia finished with 5 points, seniors Herron H. and Danielle E. each chipped in with a basket for BFS. BFS is now 5-2 overall and 3-1 in league play. 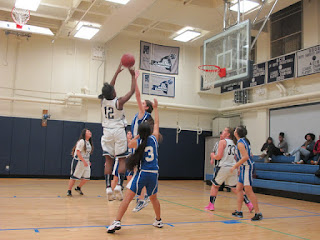 On Wednesday the BFS Girls Varsity Basketball team defeated Churchill 38-26 on the road. BFS lacked energy and enthusiasm early against rival ISAL League opponent Churchill. These two teams have played some great games over the years. After one quarter of play BFS found itself down 8-6. The team continued to struggle in the second quarter. Senior Janna J. went to the bench with two fouls and remained on the bench for the rest of the quarter. Sophomore Julia B. scored two baskets and junior Julia G. was able to knock down a three pointer to keep BFS in the game. Senior Sidney A. who missed the previous game came in to try to spark the defense in the quarter. BFS found themselves down 20-13 at the half and the coaches were not happy with their performance so far. After a long half time talk the team took the court in the third quarter with a different mind set. They came to play in the second half. BFS outscored Churchill 13-0 to open up a 26-20 lead after three quarters of play. BFS never looked back as the defense continued to be strong and even though we missed too many easy shots throughout the game we were able to grab some nice offensive rebounds, and get some put back baskets. We also started to attack the basket and get to the foul line. Julia G. knocked down another three pointer to give her six points in the fourth quarter and nine for the game. Julia B. played a very nice all around game. She finished with 10 points, knocking down a couple key shots for BFS. Even though Janna sat for almost the whole second quarter she finished with 19 points, 6 rebounds, a block and 4 steals. Seniors H., Danielle East, Hanyang K., and Rayvin T. all contributed to the victory, along with junior Chloe B.. They played solid defense and team basketball as we played our game during the second half. BFS is now 6-2 overall and 4-1 in league play. Blue Pride!! The team will now take time to focus on academics and midterms. We will be back in action during the new year!! 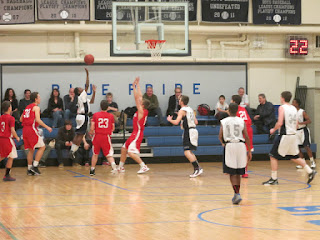 Boys JV BBall 48-26 – On Wednesday the BFS Boys JV Basketball team improved to 5-0 (2-0 in ACIS) as it survived a nail biter against downtown rivals Packer Collegiate. Winning on a buzzer beating floater by sophomore Adam W. Brooklyn Friends played through much adversity throughout the game. They trailed by nine after the end of the 1st Quarter. The Panthers fought back in the 2nd quarter outscoring Packer 17-10. With the game tied, starting freshman guard Anthony B. forced a turnover with 23 seconds left in the final quarter, that turnover led to the basket that sealed the deal for Friends’ young JV team.

Freshman Quran D. led the Panthers with 14 points, also dishing out the game winning assist to forward Adam W. Starting combo guard Anthony B. wasn’t far behind scoring 12 points, even though he was suffering from flu like symptoms. Sophomore forward Julien B. came up big for the Panthers. Julien gave the team much needed help off the bench. With the starting front court in foul trouble, Julien was forced to play multiple positions throughout the game. He added size and length to the teams front court, and despite only scoring 3 points, his versatility and hustle on both ends was a big difference maker. BLUE PRIDE!! The team will take on Friends Seminary on Friday afterschool at BFS as they looked to remain unbeaten. 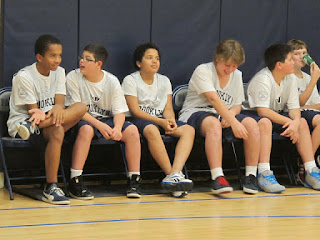 The BFS MS Boys Basketball team defeated Leman Prep 28-10 on the road. It was their first win of the season. The team was led by eighth grader Philip C. with 11 points. Fellow eighth graders Charlie S. added 6 points and Sam F. had some nice moments off the bench chipping in with 4 points. The team led 11-0 at the end of the first quarter. They are excited to play there two games next week before the winter break.