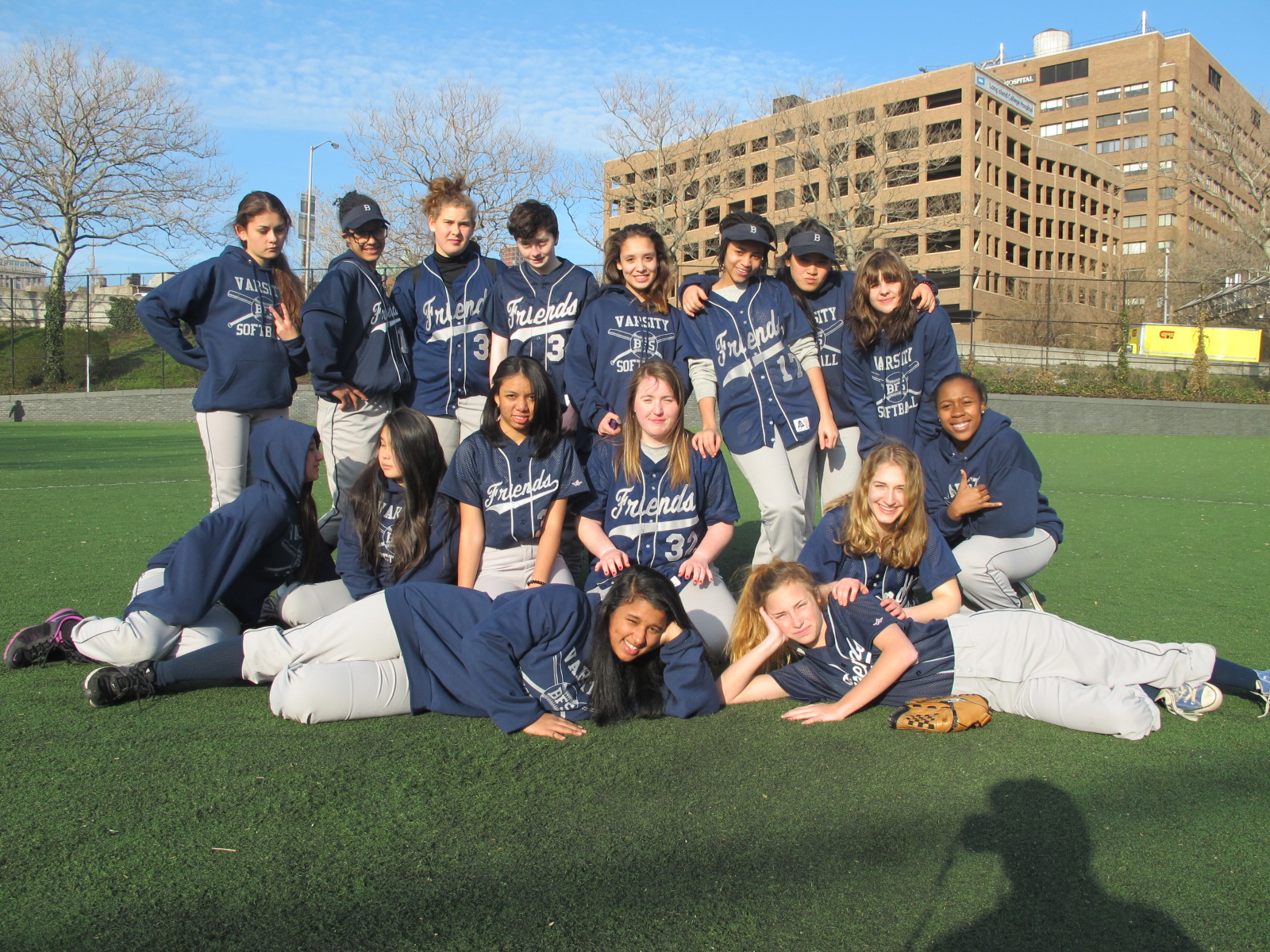 On Monday the BFS Girls Varsity Softball team played a very exciting game at Van Voorhies Field.  They defeated league opponent Bay Ridge Prep in a complete game nail biter 11-10.  The team got off to a slow start as it gave up 5 runs to BRP in the top of the first.  BRP had some very good hitters in their line-up and they were very aggressive.  BFS came back with 6 runs of their own during the bottom of the first inning.  Junior Chloe B. had a big triple and fellow junior Julia G. followed up with a nice double.  BFS played a sloppy top of the second inning giving BRP numerous chances to score.  BRP took advantage of the BFS mistakes and scored 4 more runs.  BFS bounced back with 3 of their own in the bottom half of the second.  So we were now all tied up at 9 runs a piece going into the third inning.  Both teams settled down at that point and it became a very competitive game.  Defense became the name of the game.  BFS retired BRP with a one, two, three inning.  Then BFS was able to score one run in the bottom half of the inning to gain a 10-9 lead going into the fourth inning.  Junior Julia G. came onto relieve freshman Taty R. on the mound.  Both teams managed one run a piece during the fourth inning to make the score 11-10 in BFS’ favor.  Then in the 5th inning BFS sat BRP down one, two, three again and BRP sat BFS down one, two three.  The sixth inning started with a BRP line drive shot to the left field gap, BFS Sophomore Sarah F. was in the right place at the right time, the ball went straight into her out stretched glove.  That was a huge catch and a huge play for BFS (Sarah also ended up scoring the game winning run in the 4th inning).  BRP once again went down one, two, three and BFS also went down one, two, three again.  So it all came down to the final inning.  BFS had a one point lead going into the top of the 7th inning.  BRP’s first batter (6th in their order) hit a first pitch grounder to Julia G. on the mound who caught it and threw to Chloe at first to secure the first out of the inning.  Then the next BRP batter hit a deep fly ball over our left fielders head for a triple as BFS had some trouble with the cutoff throw to third.  A clean cut off probably would have got the BRP Hitter out at third.  During the game BRP scored most of their runs on passed balls by the catcher as they sprinted home.  It looked like they might be able to tie the game the same way.  After a couple pitches the BRP hitter hit the ball to the mound where Julia G. caught it, looked the runner back at third, and threw to first for the second out of the inning.  The BRP runner sprinted home, Chloe (BFS First Base Woman) also sprinted home with the ball, she gathered herself while running home and threw the ball to our junior catcher Anna E. who calmly caught the ball and tagged out the BRP runner just in time.  Double Play!!  BFS wins league thriller 11-10 in seven innings.  Blue Pride!!  Great job team…. 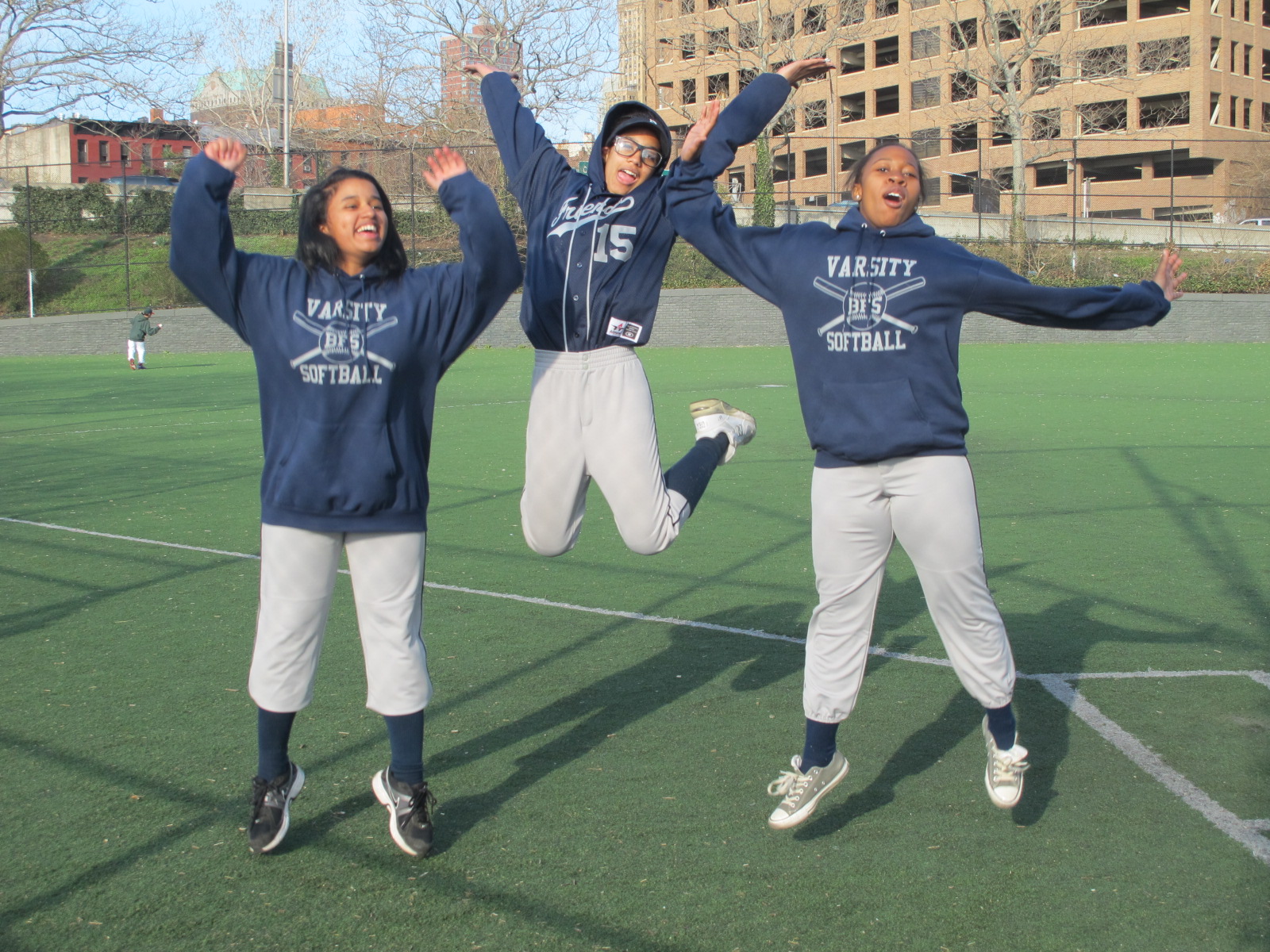 On Wednesday the BFS Boys Varsity Volleyball team defeated Berkeley Carroll on the road 3-0 (25-10, 25-14, 25-14).  Their productive practice yesterday paid off
today.  The team is starting to
understand how important it is to take care of the ball.  They were aggressive when they needed to
be, but kept the ball in play when they had to.  Everyone played very consistently, missing only 2 serves during the
whole match.  They only made 12
mistakes a total of 12 mistakes; in the previous game, we averaged 17 mistakes
per set.  That is a huge
improvement in the team’s mindset.  They dominated the match.  When they keep the ball in play they can
compete against any team.  It was a
great team effort…Blue Pride!! 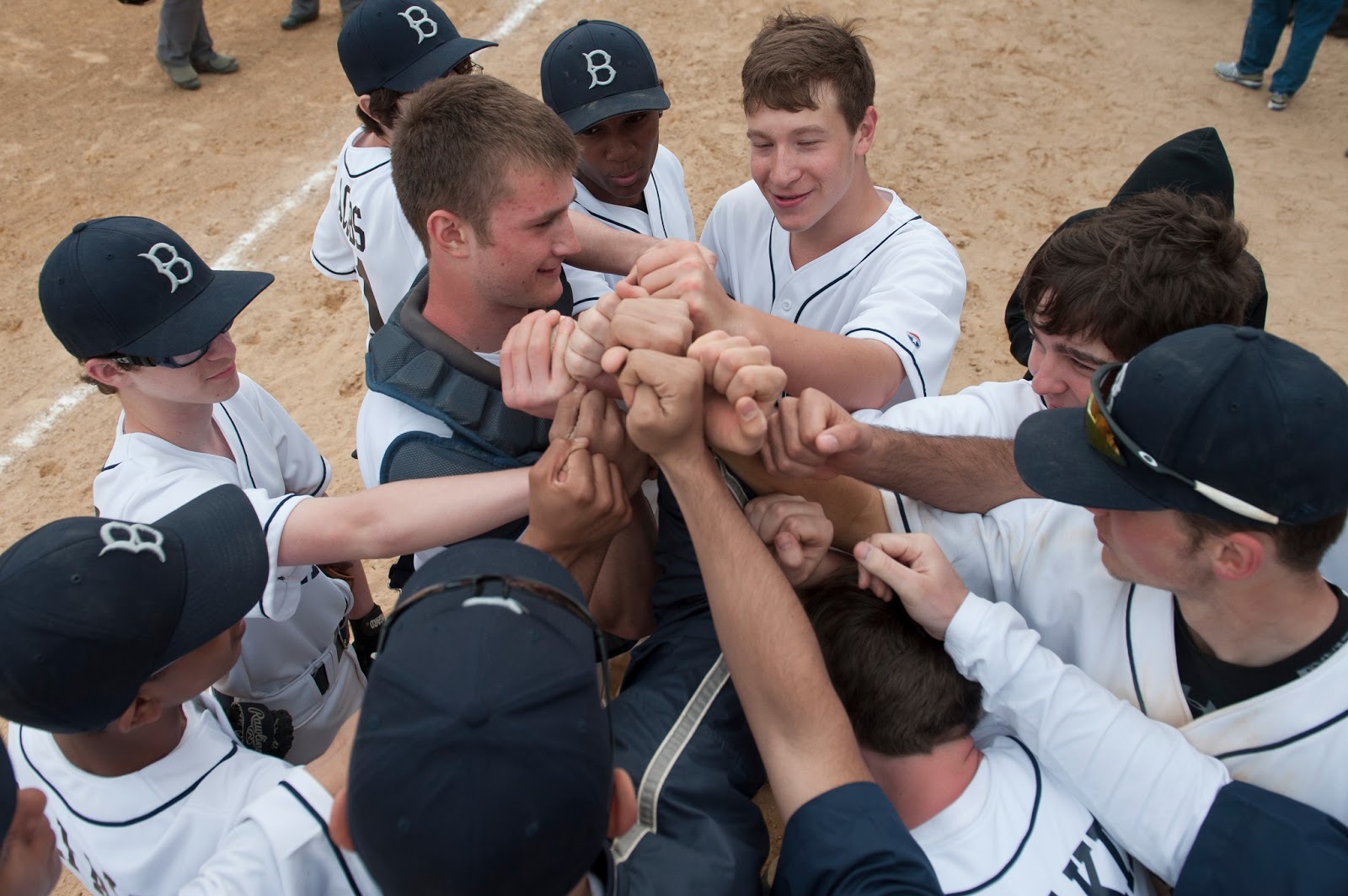 The BFS Boys Varsity Baseball team defeated LREI 4-3 down at Red Hook.  The team picked up its second win of the season as three pitchers combined for the victory.  With the game tied in the bottom of the final inning and two out sophomore Eric G. hit a triple deep to center field.  Next up was senior Avery M., with Eric on third and two strikes Avery hit a ground ball up the middle, LREI’s shortstop made a great effort to get it, but Avery narrowly beat the throw to first.  The hit drove in Eric from third and gave BFS the walk off win.  It was one of the teams better efforts this season.

The BFS Boys & Girls Varsity Track team raced in the ACIS Dwight Invitational.  The
wind was light and the weather was warm down at Red Hook which brought
anticipation of some fine races. This was the teams first race of the
season and everyone was excited to see where there training would take
them.  Sophomore Jabcob I. led the way with a fine performance in
the mile run.  His steady and strong run brought him home in fifth place
with a time of 5:38.7.  This race is a harbinger of more excellent.  Junior Elinor H. and senior Jose U. toed the line in the 400M.
Each athlete placed fourth as they strongly represented BFS.  The season
is on the way and the team looks forward to continued success. 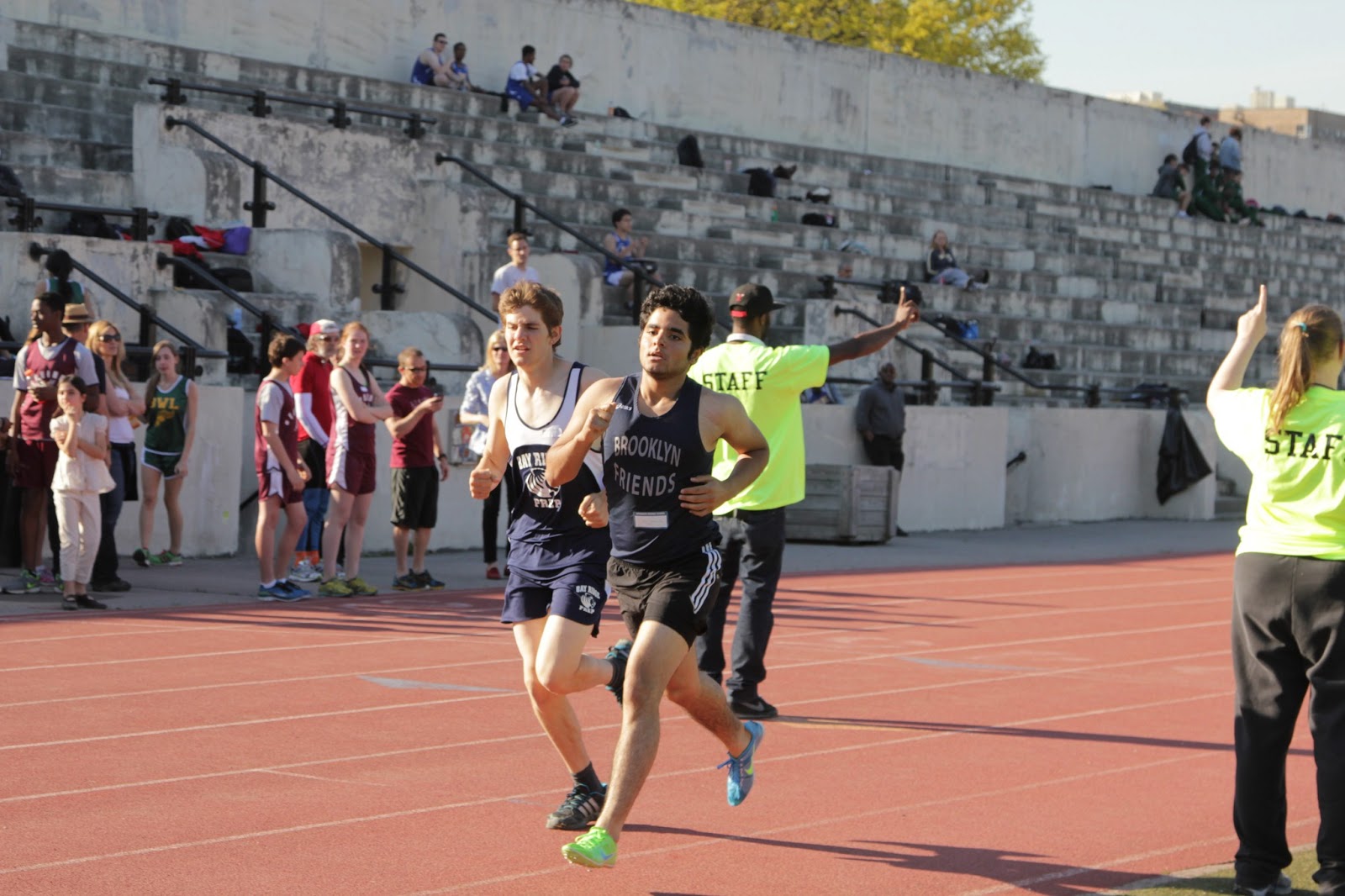 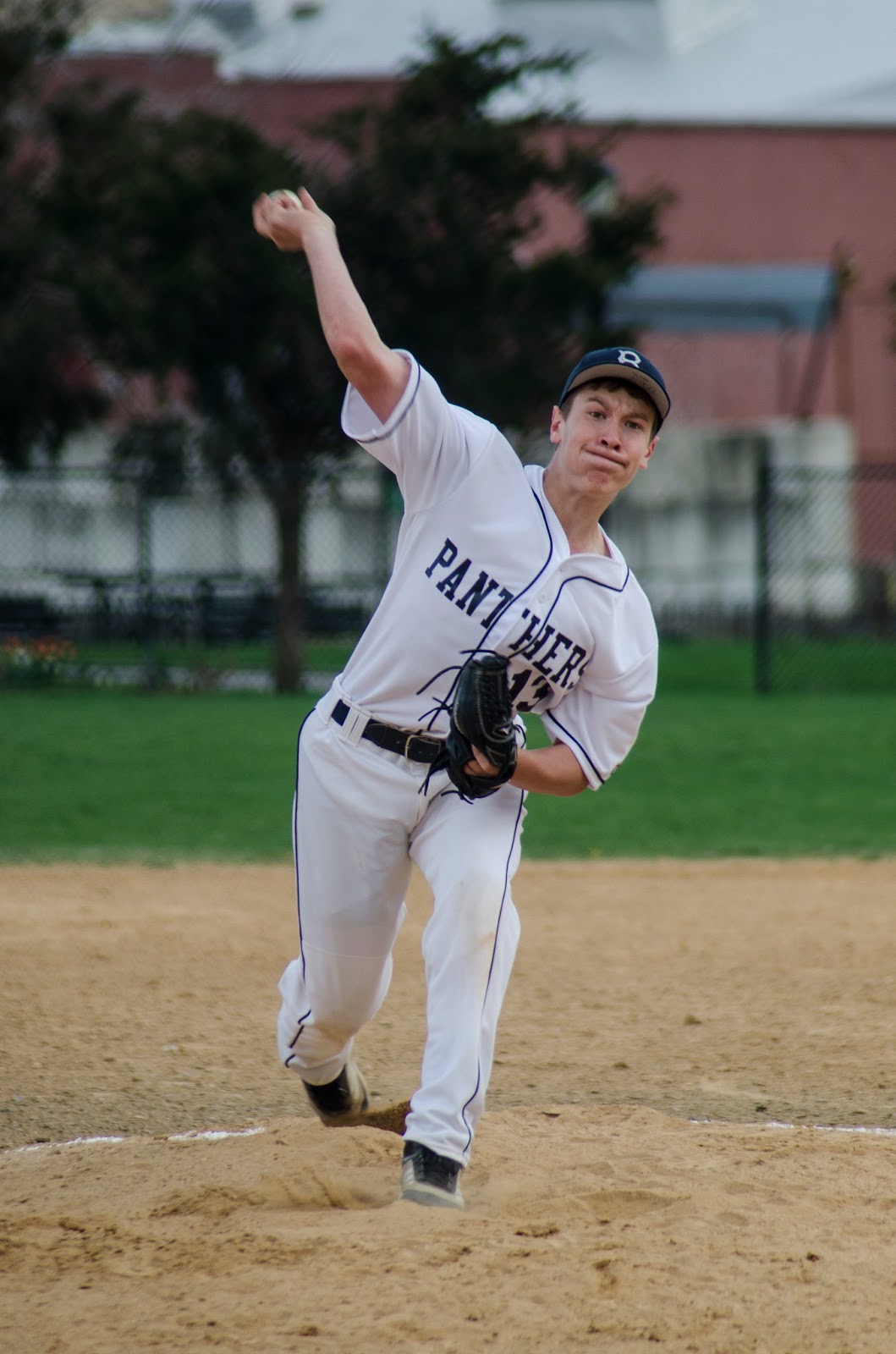 On Friday the BFS Boys Varsity Baseball team defeated Evangel Christian School to pick up its third win of the season.  In the top of the first inning ECHS got on the board by capitalizing on a BFS erro for an early 1-0 lead.  After getting the third out of the inning, the Panthers went to work during the bottom of the first inning as they scored four runs to take the a 4-1 lead.  The four runs were all they needed but that didn’t stop them from scoring nine runs during the second inning, followed by three more in the third inning for the 16-1 victory.  A couple of the key contributors were senior Theo E. who pitched five sold innings, striking out nine, while allowing just one unearned run.  Offensively the team was led by junior Adam G., who went 3 for 3 with a walk and 4 RBI’s.  The Panthers embark on a busy week next week as they play four games in six days.  First up on Monday, they take on Martin Luther.  MLHS defeated BFS in the PSAA Championship Game at MCU Park last April.