On Monday the BFS MS Girls Basketball team picked up their first victory of the season with a 28-22 win over Friends Seminary in the lower gym.  After taking a quick 2-0 lead in the first quarter the lady panthers trailed throughout the rest of the first half and going down 12-9 at the half.  BFS stormed back in the third quarter with great team defense and eighth grader Halima M. scoring 10 of her team high 19 points.  The lady panthers also recieved scoring efforts from fellow eighth grader Hannah B. who had two points repectively, as well as seventh grader Issa R. who chipped in five points and made a huge three pointer to put BFS up 22-18 near the end of the third, a quarter full of back and forth scoring.  Continuing to battle in the fourth quarter after Friends Seminary tied the score at 22 all, Halima M. made a quick basket to go back up 24-22. With a few more stops on defense, eighth grader Naima B. made her first basket of the game and putting BFS up 28-22 which just about sealed the victory right there.  A great effort by all the lady panthers.  Congrats on win number one!

On Wednesday the BFS MS Girls Basketball team picked up its second win of the week by beating St Ann’s 21-12 in the lower gym.  The lady panthers started out hot with a 6-0 lead on baskets by Halima M. scoring four of her 13 points, along with Jesse I. scoring two points on a great open jump shot.  St. Ann’s fought back to equal the total at six all midway through the second quarter, but that was as close as they would get against the lady panthers stiff team defense.  BFS started to pull away after halftime by shuting out St Ann’s in the third quarter and getting scoring contribution from Issa R. who scored four points, as well as Naomi M. who added in two points.  A great game by the team as a whole and a great week giving the middle school lady panthers a two-game winning streak heading into winter break.  Congratulations girls!! 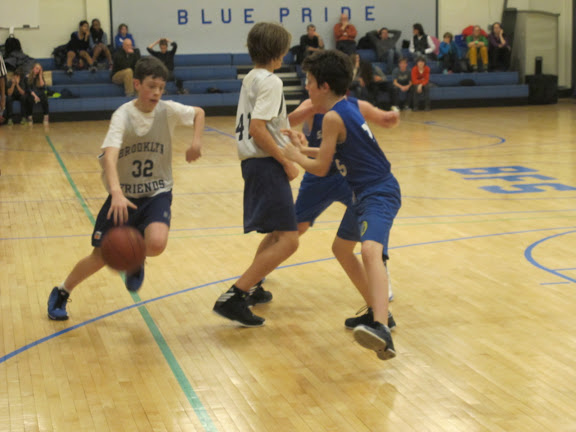 The MS Boys Basketball team had hard fought 22-13 victory over St. Ann’s.  The boys really did a great job on defense and continued to get better as a team.  The win evened up their season record at 2-2.  The team was once again lead by eighth graders Charlie C and Philip C. who scored 20 of the teams 22 points.  Although their we’re contributions from many of the boys, eighth grader Isaac H. had a standout game.  He scored just two points, but anchored a terrific defensive effort that allowed just 13 poins to their opponent.  He was also outstanding rebounding the ball as well as his efforts freeing up his teammates with several hard screens.  The team is excited to improve and play more basketball after the winter break.

The BFS Varsity Boys & Girls Indoor Track teams headed up to the 168th Armory for their first meet of the season.  Senior Jose U. had a break through and ran a time of 42.86 in the 300m. This is almost a full two second improvement from last year.  Junior Elinor H. ran a time of 50.28 for the 300m which is right where she ran last year. This is good news. They were both pleased with their results and glad they participated in the meet.  Blue Pride!!